Understanding positional values and players the Falcons should target

Share All sharing options for: Understanding positional values and players the Falcons should target

The Falcons were recently mocked a Notre Dame linebacker in the first round, and Jaylon Smith's blend of athleticism and injury reminded many of former UGA and current Los Angeles Rams running back Todd Gurley. Many were strongly advocating for the Falcons to draft Gurley in the first round of the 2015 draft, and a dedicated but vocal group are still complaining about Atlanta's draft strategy.

Recently, SBN's official Rams official twitter account, Turf Show Times, discussed the team's selection of Gurley over other positions. Their biggest question: how much of an impact will a running back have over players they passed on?

@bschaeffer12 I don't disagree with you. The question is how much a potential superstar at RB over a Tre Mason makes the team better

Despite having an elite running back for (most) of the year, the team produced only one more win than the prior year. They moved up from 20th to 7th in rushing yardage, and from 17th to 6th in yards per carry. However, the offense as a whole took a step back. The Rams dropped in several major offensive categories, including first downs, third down conversions, and time of possession.

Many believed Gurley would become one of the best backs in the league, and that seems very likely to come to fruition. But how many extra wins does a top running back produce over a good to great running back? Turf Show Times noted that the Rams had Steven Jackson, a multiple time Pro Bowler and All-Pro, but his production never made the team consistently competitive. In nine seasons in St. Louis, the Rams made the playoffs one time: Jackson's rookie season, when he was a backup.

This is the biggest problem with going best player available. While you can find top running backs throughout the draft, it is rare to find premium positions later on. How many starting left tackles are late round gems? Atlanta selected a great running back in the 4th round, and tried to select a great pass rusher with multiple mid- to late round selections.

Well, I got something to say. While it is easy to say a team should pick the best player available, it completely ignores the opportunity cost and impact of a specific position. SBN's Arrowhead Pride pieced together the following positional draft value pyramid from needs developed by multiple analysts and former football personnel directors, based on the factors such as the cost to apply the franchise tag for a position, the scarcity of an elite player at that position becoming a free agent, the position's durability, and the impact of that position. 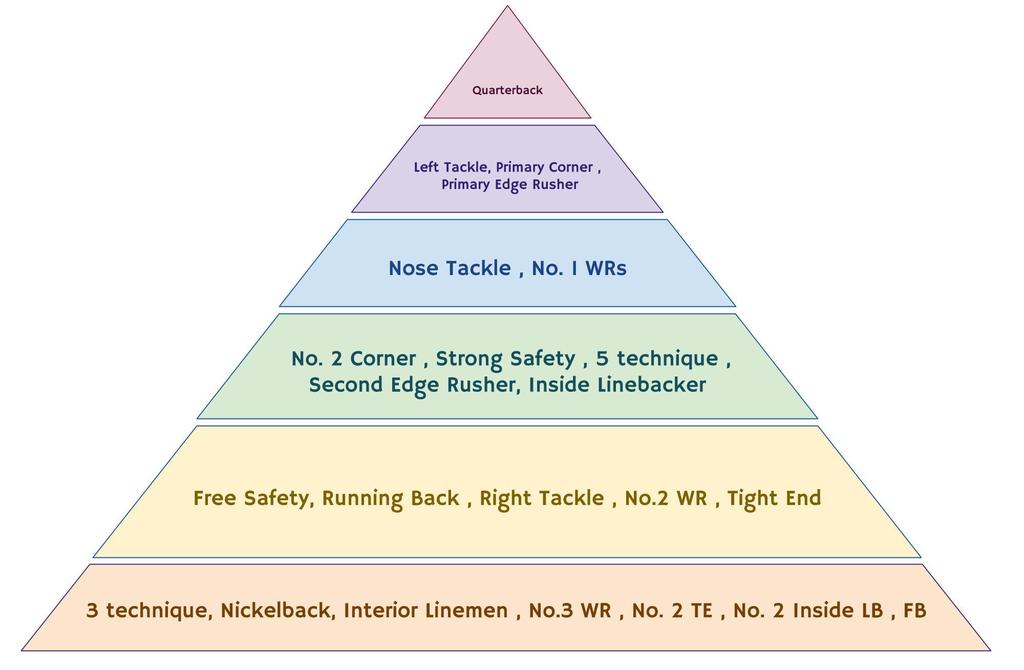 This pyramid is a useful tool for determining when and where to pick a certain position. For instance, your top wide is far more important than your starting free safety. You will always have the exceptions: an elite player like Ed Reed should bump up that player. Outside of one of those top exceptions, those players are simply not worth a first round pick. Consider taking a tight end in the top of the draft. Even the more successful of the selections, like Tyler Eifert compared to Eric Ebron, provides negligible, if any additional on-field impact over a free agent like Jacob Tamme.

Lets bring this discussion back to Atlanta. The team has most of the top of the pyramid figured out, now that Atlanta finally brought in a primary edge rusher to replace John Abraham in Vic Beasley. Some of the pyramid will relate a bit to different schemes, but as the Arrowhead article said, the main principals remain regardless of scheme. However, you will notice more 3-4 terminology in the pyramid. Walter Football has an exact list for 4-3 defenses here.

Where has Atlanta gone awry? Typically when throwing this pyramid out the window early in the draft. While it can't predict busts like Sam Baker, or injuries like Peria Jerry, it can point out that 4-3 WLB is all the way down at the 5th tier. Sean Weatherspoon had to be one of the best in the league for a long time to have ever been a good value based on his draft slot. That is, simply put, a position you can fill later in the draft or for a relatively reasonable price in free agency.

After Atlanta traded a boatload of draft picks for Julio Jones (who fits one of those exceptions because he is one of the best), Atlanta ignored their premium positions and used their top pick on interior lineman Peter Konz, way down on the sixth tier.

Dimitroff has thankfully been able to check off three players from the second tier in the last three seasons, and the team can actually be in the position to be more selective with their pick. However, they can still take the best player available at some of the top positional values.

Jaylon Smith would likely fill in at WLB, all the way down at tier five. Considering his recent injury, Smith would need to earn multiple All Pro selections to be worthy of that selection. The Falcons could likely get a good impact from free agency or later in the draft.

Atlanta would have a few more options if they want to plug in another pure pass rusher across from Beasley, but most of those available in this range lack to preferred size to hold their own on run downs. They could try moving an OLB inside, or find a wide receiver worth the exception. However, Atlanta has plenty of potential options at higher positional values to provide the biggest impact at hard to fill spots.

Sorry Ezekiel Elliott fans, but the value just is not there.