2015 NFL Draft: Which pass rusher should the Falcons select?

The Falcons seem set on drafting a pass rusher in the first round. Which player is the best fit for Atlanta?

Share All sharing options for: 2015 NFL Draft: Which pass rusher should the Falcons select?

The primary concern for the Atlanta Falcons in the 2015 NFL Draft is adding a pass rusher. We've known that for quite some time now, but we're still trying to hone in on which edge rusher is going to land at the No. 8 pick.

Our past writer roundtables have all discussed offensive prospects, so today we're transitioning to the most important need for the Falcons. Which pass rusher are they going to take? Here are our picks.

Anything can happen, I suppose, but I don't anticipate Vic Beasley is going to make it to the #8 pick. That leads me inexorably to Randy Gregory, one of the best pass rushers in this class and a man who may just make it to the eighth pick.

I know there are legitimate concerns about Gregory's failed drug tests and decision-making, but I find it odd that people who were stumping for Greg Hardy are now getting cold feet about a kid who smokes up a little too often. Gregory's risk is, in my mind, outweighed by his history of production, his explosiveness, and his fit as a LEO in Dan Quinn's defense.

Bud Dupree would also be a strong choice here, so I don't think the Falcons can go too wrong here barring a run on pass rushers. I do think Gregory is both the most likely pick and a damn fine one, to boot.

Dan Quinn has said repeatedly he prefers his ideal LEO to have length, and the 6'5'', 235-pound Gregory fits the bill. The Nebraska product also has the speed (he clocked a 4.64 40 at the NFL combine) and athleticism to play the position at a high level.

Of course, Gregory comes in as a bit of a gamble since he failed two drug tests while at Nebraska and tested positive for marijuana at the combine. But considering he owned up to his mistake and seems more focused on his professional career than smoking weed, I can't say he has legitimate off-the-field concerns.

On the field, Gregory could benefit from adding a bit more weight to fill out his frame. As it stands, he would immediately upgrade the Falcons' defense with his ability to get to the quarterback.

When we talk about the LEO position, it's easy to get solely focused on just the pass rush, but in the defenses Quinn has run in the past, that position is responsible for much more. You need an athlete that is not just a good pass rusher, but is also capable of dropping into space and is capable at stopping the run. 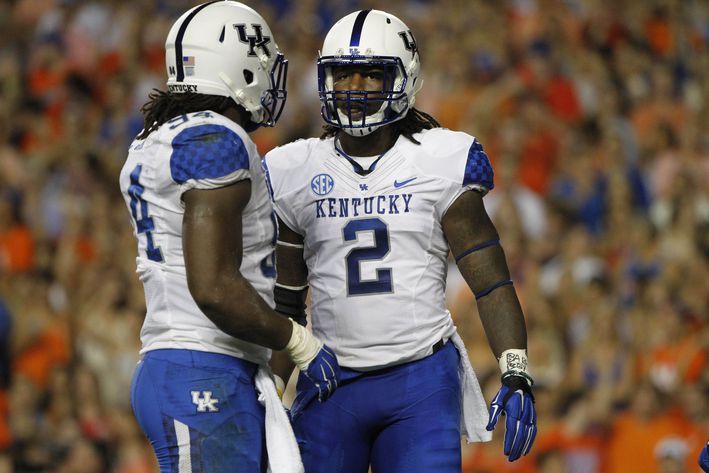 Dan Kadar has three pass rushers off the board early. Will it come down to Dupree or Gregory for Atlanta?

Dupree has been doing that his entire time at Kentucky. While Beasley is probably the more accomplished pass rusher, he's often washed out in the run game. Fowler has tremendous potential, but is likely to be off the board by 8. With Gregory, the concerns over failing a drug test at the combine could take him off the board - even though he's a great talent as well.

Dupree is hardly a consolation prize, though. He is nearly as fast as Fowler and Beasley, but is larger and just as strong (if not stronger). His 42-inch vertical and 138 inch broad jump show how insanely explosive he is and his 4.56/40 time was done at 269 pounds - which is incredibly impressive. He may have the most raw potential of any of the pass rushers in this entire draft class.

If you're looking for the best existing pass rusher, that's probably Beasley or Gregory. But for my money, the best "fit" for what Quinn has executed in the past - and the player with the most upside - is Dupree.

I'm assuming Beasley is gone by now, though if he isn't, I anticipate we'll see the world's first teleported draft card with his name on it.

Most of you probably read my post evaluating the top five rushers in this draft. I have Gregory second, and that includes the weed issue. I've heard on the radio from a couple different people that it isn't the weed that's the problem, it's that he knew the test was coming. Can teams get over that? I think we'll be the team that takes the chance on Gregory.

His talent is immense. A "slow first step" to an average fan was actually calculated. His motor is relentless. He's not overpowering, but he's strong enough. He has a lanky frame with plenty of room to bulk up. He fits the "speed and length" mantra that we've heard out of Falcons camp. His numbers are good, though they're not quite Beasley numbers. He is basically a slightly less physical, less fast version of Beasley...but his ceiling might be higher than Beasley's.

I've said all I can say on Gregory in my evaluations. The Falcons haven't been a team that took many risks in the past, but they might overlook this one to help them get back on track.

I'll stray from the pack a bit and stick with the pass rusher who has piqued my interest the most. Beasley has just about every tool you're looking for in a pass rusher, and with a little more coaching he could turn into the sort of consistent, double-digit sack threat that has been missing from the Falcons defense since John Abraham left the team. Will the seven teams picking before Atlanta actually pass on Beasley? I have no idea. The chance that happens is looking more doubtful as the draft draws closer, but it's also possible NFL talent evaluators could see his run-stopping abilities as a true weakness.

I waxed poetic about Beasley's potential last month, and while my suggestion that the former Tiger could slot in as the SAM linebacker no longer looks feasible with the signing of Brooks Reed, it's hopefully a decent look at the skill set he possesses.

The Falcons have lacked an elite pass rusher for several years now, and Gregory, who registered 17.5 sacks in two seasons as a Cornhusker, has the frame and skill set needed to be that guy. Raw but supremely talented, the University of Nebraska product would be a great fit in Dan Quinn's defense at the LEO position.

Gregory is so physically gifted that Sports Illustrated's Greg Bedard believes the 6'5'', 235-pound OLB is more athletic than Jadeveon Clowney in many respects.  Bedard's analysis can be debated, of course, but when someone measures up to a generational player, you have little choice but to pounce.

In addition to his God-given abilities, Gregory appears to be the kind of competitor Quinn desires. This wasn't necessarily the case at the beginning of 2014, however scouts seem to agree that he matured substantially as his junior campaign wore on.

Gregory would be something of a risk-he did fail two drug tests, one of which came at the combine-but prospects of his caliber don't come around often. Atlanta desperately needs to upgrade its front seven, and adding this high ceiling defender could go a long way towards accomplishing that.

Dante Fowler would by my top choice as a pass rusher, but as DW mentioned, he'll be gone by the time the Falcons are on the clock. I could easily see this being a toss-up between Gregory and Dupree, and I'm leaning towards the SEC on this one.

Dupree's background is interesting, as he initially committed to Kentucky with the hope of playing offense. Ever since the Wildcats coaching staff kept him on defense, Dupree has grown into an all-around player who can contribute in every way.

He's explosive off the edge. He keeps his balance and momentum going when he gets the edge. He's constantly fighting and doesn't give up on plays. Dupree needs work with his hand use while rushing the passer, but he's improved in every facet of his game throughout his college. With some work with the Falcons coaches, Dupree has the upside to become a dominant pass rusher and a perfect fit in the LEO role.

Dupree was also a captain at Kentucky, which is another plus for the Falcons. I'd be excited to see him in Atlanta and watch him develop under Quinn's coaching.
____

Fowler, Beasley, Dupree and Gregory are going off the board early. We'll see which one makes it to the Falcons, or if Thomas Dimitroff wants to move up instead of waiting.

Who are you liking as the Falcons first pick?