Five Falcons who could be on the chopping block

All five players played a significant amount of snaps in 2014. Despite being under contract going into 2015, they could be released within the next few weeks.

Share All sharing options for: Five Falcons who could be on the chopping block

The long-awaited offseason is finally upon us. After a month of digesting that the Falcons would finally be under a new regime, the time is now for action. Even though free agency isn’t quite here yet, there are roster decisions that should be made within the next few weeks. The Falcons have several free agents amongst their defensive line and secondary, and those personnel decisions will be debated about over the course of the next month.

This particular list consists of players that are contracted to play for the Falcons in 2015. Due to poor play, age, or a hefty salary, they shouldn’t be assured of a roster spot without due consideration. These players range from ultimate fan favorites to usual punch lines for the team's 2014 misfortunes. Here are the five players to monitor throughout this offseason. 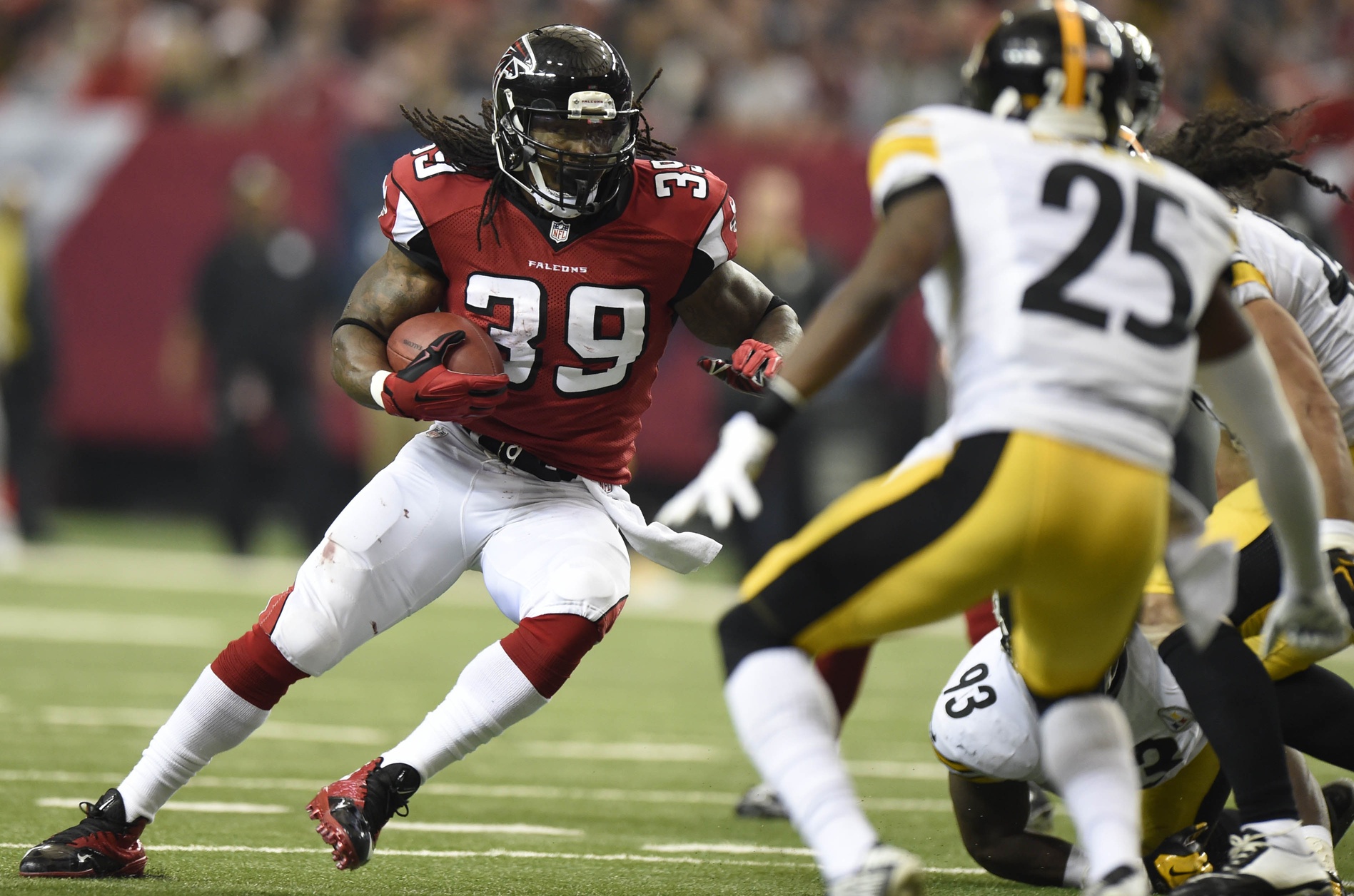 Will he be released? Yes

Jackson was the ultimate scapegoat through Atlanta's struggles in 2014. For some reason, many fans would put his name at the top of the never ending list of problems. My label of Jackson doesn’t exclude him from being criticized. His lack of burst was evident when it came to running stretch plays. His pass blocking was a bit disappointing compared to Jacquizz Rodgers. There are a fair amount of critiques for Jackson’s average play in 2014. Dirk Koetter should have used him better and realized his limitations. The weekly designs of trying to run Jackson to the outside were pitiful. It may have only worked against Tampa Bay in the infamous Thursday night game, where everything went right for Atlanta.

The three-time Pro Bowler can still play a vital role in the NFL. It’s apparent that Jackson shouldn’t be receiving 15 to 17 carries any longer. That doesn’t take away from his ability of being an excellent short-yardage back who can still fight for extra yards. Any organization that believes they can contend next season and needs a power back should be interested in Jackson. Atlanta isn’t on the list of teams that will be contenders next season. That makes it right for them to part ways with him. It also has to be mentioned that Jackson is scheduled to make $3.75 million this year. Not only is Jackson a poor fit in a zone-blocking scheme, but will be making far too much money as a role player. This move is essentially a lock to happen within the next few weeks.

When it comes to having a love-hate relationship with a player, Falcon fans will put Harry Douglas among the top of their respective list. An occasional key third down catch is what made fans appreciate him. The consistent ability of not making catches in traffic is what made fans despise him. They see Julio Jones, Roddy White, and Devin Hester fighting for extra yards. Douglas shows the tendency of immediately going down by any hint of contact. While he seems well-liked amongst the organization, let’s take two things into consideration.

Douglas is scheduled to make $3.5 million as a 31-year-old slot receiver in 2015. At a position that has unlimited talent, this should make Douglas expendable. Denarius Moore or a possible rookie wide receiver could be more productive from that position. Bernard Reedy may be an option as well. Douglas was considered to be an underrated player from 2008-2011. He was much more explosive in stretching the field. It also helped that he would make more key plays in opportune times. Now his speed has began to diminish and that has led him towards struggling to get open. He’s become mostly a possession receiver, although can occasionally burn nickel safeties for a big play. At this point, it’s time to develop receivers for the future and Douglas shouldn’t be a part of those plans. Don’t expect him to be released though. Unless the new coaching staff is ready to take complete charge, expect the usual case of joy and agony from watching Douglas. This is the final year of his contract, so it seems highly likely that this will be his final season in Atlanta.

Should he be released? No

This could prove to be an interesting case. Blalock is somewhat forgotten about, due to several other players underperforming. It becomes difficult to remember all of the disappointing offensive linemen amongst the roster. Blalock’s play declined a bit throughout 2014. A back injury may have been the cause of that. That doesn’t take away from him being manhandled in a must-win game against Carolina. Blalock was always considered to be overpaid and not a great run blocker. James Rael wrote about Blalock’s future being in question last year.

It doesn’t seem likely that Blalock’s contract would be restructured. We rarely see an offensive lineman have his contract restructured. He has some pull in being one of the few reliable offensive linemen for the Falcons in the past four years. He’s had to work alongside mediocre left tackles and centers through the majority of his career. With so many holes on defense and him being considered a leader on the offensive line, it seems highly unlikely that they would cut Blalock. The main reason why he was mentioned was due to his 7.9 million dollar salary this season. That would be the only sign that he would possibly be released. In the end, Blalock is 31 years old and still remains as a reliable player for an offensive line that desperately needs it.

Will he be released? Yes

The biggest punchline for many jokes in regards to the Falcons’ defensive struggles. Besides Ray Edwards, it’s fair to say that Tyson Jackson was Thomas Dimitroff’s worst decision in free agency during his tenure. Many people were skeptical of Jackson being signed by Atlanta, particularly in receiving 9.5 million guaranteed. That contract will make it difficult to decide on whether or not to keep him. Dan Quinn is reportedly going to be making decisions about the roster, which makes me believe that Jackson could possibly be released. The growth of Ra’Shede Hageman, reliability of Corey Peters, and better resume of Paul Soliai gives Atlanta options. All signs are pointing towards a 4-3 scheme under Quinn as well.

Jackson struggled significantly last season in all aspects. The biggest aspect was playing as a defensive tackle in a 4-2-5 scheme. While Mike Nolan tried to disguise his defensive alignments into playing a 3-4 scheme, he mostly ran a 4-2-5 scheme. Jackson failed to make any impact in stopping the run, as Kevin Seifert highlighted in ESPN’s recent featured article of the Falcons. Out of the five players listed, this is the toughest prediction to make based on his hefty contract.  If the decision was strictly based on his play, there would be no need to ponder keeping him. With his contract and Scott Pioli’s influence, Jackson’s future will be something to monitor throughout the off-season. It could very well come down to Jackson and the final player that could be released for the defensive tackle rotation in 2015.

Should he be released? No

Leadership is one of the most important essentials to have on a team. It’s also one of the most difficult essentials to replace. If Atlanta decided to release Jonathan Babineaux, the leader of an embattled defensive line would be gone. Babineaux is one of the few remaining leaders on a defense that desperately needs leaders. While his play has declined, that is what you would expect from a 33-year-old player. There are still a fair amount of factors in why Babineaux should be retained over Tyson Jackson. One of the biggest knocks on the past coaching staff was the over usage of Babineaux. He would still play far too many snaps for a player of his age. The poor utilization of him playing as a defensive end is another story in itself. Besides having a much cheaper contract than Jackson, it’s highly likely that Babineaux would be more productive in 25 snaps than Jackson would.

The possibility of seeing Babineaux play only 20 to 25 snaps a game could benefit the defensive line greatly. Let’s not take anything away from his play, which has still been reasonably solid over the past two seasons. His ability to penetrate into the backfield is still an excellent trait. The ridiculous amount of snaps has taken a toll on him though. When you combine leadership, a far cheaper contract, and his overall ability, the debate between Jackson and Babineaux should conclude in a simple answer. Will the organization get it right though? Could Pioli influence the front office into believing in Jackson for some bizarre reason, besides being five years younger? It shouldn’t be the case, but that’s where it stands within the Falcons organization. You can't have the utmost confidence that they will accept their mistakes nor fulfill needs effectively. The track record from last year's free agency proves it.