It's not easy to make a case for Steven Jackson, but The Falcoholic is going to regardless.

Share All sharing options for: The Difficult Fantasy Case For Atlanta's Steven Jackson

When you think of Steven Jackson, the words that tend to come to mind are derisive. Old. Washed-up. Once great. Always injured.

What gets lost in all that eye-rolling and head-shaking is that Steven Jackson can still help your fantasy team, and with the word out that S-Jax is a has-been, there's never been a finer team to try to sneak him onto your fantasy team as an RB3. A year ago, you would have needed to draft Jackson in the first three rounds. This year, you may well be able to get him in round five or six, if not later, depending on your league's format. That changes a lot, particularly for an aging back who still has a track record of success and a favorable situation. 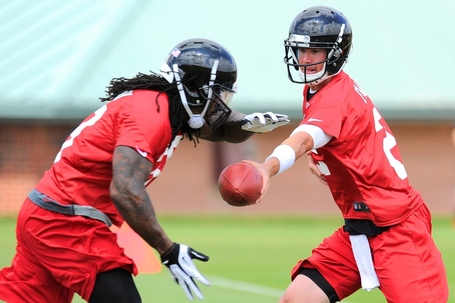 The argument for Jackson is complicated by his injuries and his lousy 2013, where he cashed in a modest 115 points in standard formats. Yet we can't ignore the fact that Jackson is going to play in Week 1, that he is the clear lead back in an otherwise muddled backfield and that he's the only player who looks like an option at the goal line at this point. He could fall short of 1,000 yards and still put up 10 touchdowns in this offense, plus 30-40 receptions out of the backfield. You don't care about his rate stats in fantasy as long as he gets you your numbers, and assuming health, there's little question Jackson in 2014 will give you those.

So whether you draft Jackson depends on your appetite for risk. If you think he can stay healthy and you're not drafting him in a dynasty league, Jackson is absolutely worth a pick in 2014. Don't pass him up for younger, more attractive options in the 4th round and on, but if he's hanging around, make him your RB2/RB3 pick. You may just be pleasantly surprised.

Editor's Note: SB Nation's partner FanDuel is hosting a $1,000,000 Fantasy Football Contest for Week 1's NFL games. It's only $25 to join and first place wins $100,000. Starts Sunday, September 7th at 1pm ET. Here's the link. FYI: These are just my opinions and Fanduel gave me money to play.