Where Can You Watch The Falcons-Vikings Game On Sunday?

A map shows you exactly where you need to be to catch the game.

Share All sharing options for: Where Can You Watch The Falcons-Vikings Game On Sunday?

The good news: The Falcons-Vikings game only has to compete with one other game this week for national coverage on FOX. The bad news: The other game is receiving most of the coverage.

We know this thanks to the invaluable 506 Sports, which has a map of the Falcons game and the San Francisco 49ers-Philadelphia Eagles game. The Falcons and Vikings get coverage aplenty in Georgia, Alabama and parts of the northern Midwest, and sparse coverage elsewhere. Most of the country will get 49ers-Eagles, as you can see on the map below (the Falcons-Vikings game is in blue). 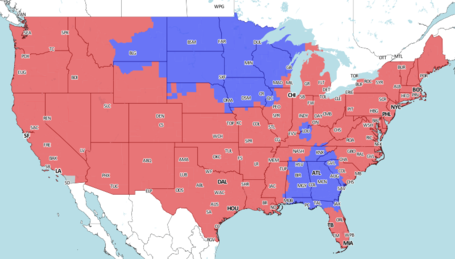 If you're in one on the areas where the Falcons game won't be on, I suggest figuring out an alternative to FOX as soon as possible. Good luck out there.