The Falcons will attempt to beat a hated NFC South rival tonight when they host the Buccaneers.

The Falcons host the Buccaneers tonight as they quest for a 2-1 record, and the comfort of the Georgia Dome could make a large difference.

Tampa Bay will likely be missing Mason Foster, Gerald McCoy and Doug Martin, three key pieces that would have made life tougher for Atlanta. The Falcons almost always play better at home, and with Jake Matthews likely returning, the team looks healthy and ready to go. With so much anxiety over the state of the team, particularly the defense, a win here could go a long way with fans.

Our very own Jeanna Thomas is sitting in the press box tonight. Here's a shot of her view for tonight's game. 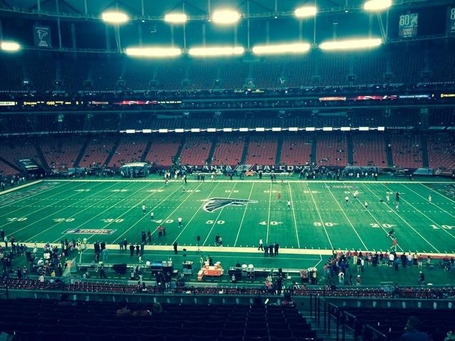 So let's hope we're a happy group of fans after this one's over, because we've got a week and a half to chew the results of this game over.