Where can you watch the Falcons-Bengals game on Sunday?

Share All sharing options for: Where can you watch the Falcons-Bengals game on Sunday?

If you're one of those unlucky far-flung Falcons fans who have to struggle to find live games and don't have Sunday Ticket, you always want to know if you have an opportunity to catch the game on CBS or FOX. This week's game was flexed from FOX to CBS, which was supposed to lead to wider-spread coverage.

Hopefully, this map from 506 Sports will help you figure out if you're going to get the game live. The Falcons-Bengals coverage is in the blue zone. 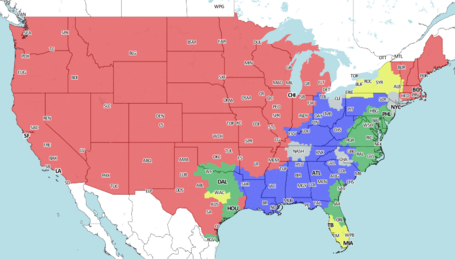 As you can see, much of the Southeast and parts of the Midwest will get the Falcons vs. Bengals game at 1 p.m. EST. Most of the country will be stuck watching the Patriots and Minnesota, because who cares about the entire Western part of America, I guess. If you live in the blue zone above, tune your television in to CBS this weekend.

Visit 506 Sports for more information on the games ahead this weekend.