Can the Falcons Succeed Without a Strong Pass Rush?

Coming off a year in which they finished at the bottom of the NFL in pass rushing, the Falcons aren't poised to be much better in this area in 2014. Will this weakness be a season-killer?

Share All sharing options for: Can the Falcons Succeed Without a Strong Pass Rush?

We've learned a lot about the Falcons over the last few months, and most of this knowledge is encouraging. However, one major deficiency is expected to linger from last year's horrific collapse: the anemic pass rush.

Bryan Cox has injected a new, meaner attitude into the defensive front, and a stronger emphasis has been placed on the 3-4 formation, but a new coach and a change in strategy can only do so much. Truth is, Atlanta doesn't have the kind of personnel in place to rack up a lot of sacks and QB pressures.

Atlanta’s defense really struggled to get to the quarterback in 2013. The team was tied for second-to-last in the NFL with only 32 sacks. They also had an NFL-low 19.3 Pass Rush Productivity grade with a four-man rush. The Falcons’ sack leader was Osi Umenyiora, who accumulated 7.5 sacks last season though wasn't as impressive as his sack numbers indicate, earning a pass-rushing grade of-3.5. Osi also ranked 30th out of 38 4-3 defensive end qualifiers in Pass Rushing Productivity (7.5). Many expected Atlanta to find a new pass-rushing linebacker, but that never happened. They didn’t even address the position his offseason until they selected Notre Dame’s Prince Shembo in the fourth round. Kroy Biermann returns after missing most of the 2013 season, but could struggle coming off an Achilles injury. The Falcons will also be hoping for a third-year leap from former fifth-round pick Jonathan Massaquoi. Expect the Falcons’ pass-rushing struggles to continue in 2014.

This is a really pessimistic outlook, but it's tough to argue against the author's sentiment. The talent simply isn't there to make huge strides in this area.

For the sake of conversation, let's say the Falcons remain one of the worst teams in the league at rushing the passer. Will that kill their chances of making the playoffs?

To help answer this question, I plugged in the last five years worth of Pass Rush Rating numbers (as defined by PFF, which is explained in-depth here) to see what kind of correlation exists between wins and pass-rush effectiveness. Here's what I found: 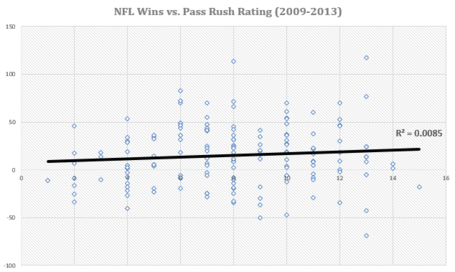 The regression line is positive -- meaning teams are more likely to succeed with good pass-rushes, which makes sense -- but it is extremely weak: the R^2 for the last five years of data is just 0.0085.

So what does this mean for the Falcons? It means a low number of sacks and QB pressures shouldn't destroy their playoff chances -- especially with how much talent they have on the other side of the ball.

For further evidence, just look at the 2009 Saints: they won the Super Bowl with a dreadful -42.4 pass rush rating. Two years later, their rating plummeted to -68.5, and Drew Brees was still able to lead them to 13 victories.

Of course, a quality pass-rush would do wonders for Atlanta's post-season hopes, but in today's NFL, which is often dominated by high-octane offenses, it's more of a luxury than a necessity.

The jury is still out on the Falcons, and there are many reasons to believe they'll fall short of expectations this year, but it's hard to see a poor pass-rush doing them in. Recent history shows us that, unlike most facets of the game, it's not difficult to compensate for this weakness.