Steven Jackson talks with The Falcoholic about the 2014 season

We've seen the veteran running back do several interviews so far in 2014. It's time for us to ask him some of our own questions.

Share All sharing options for: Steven Jackson talks with The Falcoholic about the 2014 season

Falcons running back Steven Jackson turns 31 tomorrow. He has 10,681 rushing yards in his career. All the stats look impressive in his bio, but he's certainly not done.

Jackson has been busy in the offseason with the media. He's posted several times on his blog, he's been interviewed by a few major news outlets, but I thought it was time for us to see what he thinks about 2014. I asked Jackson about the upcoming season and what his expectations are. Here's what he had to say.

Alex Welch: You're entering your 11th season in the NFL. What's your mindset going into another season? Do you approach the season differently in training/preparation now that you've had so much experience?

Steven Jackson: My mindset going into the season is to remain hungry and humble. I always feel that I can get better, and want to remain open to my coaches' ideas to allow that growth to continue to occur. My training is different now that I'm older. It's about minimizing the time I spend beating up my body, and more about effective, quality training that translates into positive gains on the field.

AW: What's it like preparing for a season with the Falcons now that you're more acclimated to the team and the city?

SJax: This offseason training has been fairly smooth because I know the offense, teammates and coaches. It allows for the elimination of unnecessary stress.

AW: Last year was obviously frustrating, which you alluded to in a recent blog post. What do you view as two or three key things you and the team have to do to get back on track?

SJax: To get back on track, we all need to trust each other more. When you're on a team full of capable players, it's hard not to feel like you always want to make the big play. We all can trust each other to make the block, the tackle, the right step on a block scheme. We also need to bond together outside of football. We need to let the team become family, and not just teammates. And finally, we need to have fun doing all of these things. We have the talent and coaches to do what a championship level NFL team needs to do to have a successful season.

AW: Looking at how this line is shaping up, how confident are you that you'll have more room to run than a year ago? How do you feel about the additions the team made on the offensive line?

SJax: The additions on the offensive line are very encouraging. The thing I'm most excited about is the addition of coach Mike Tice. What happened last year will not happen again. I feel very comfortable saying that. 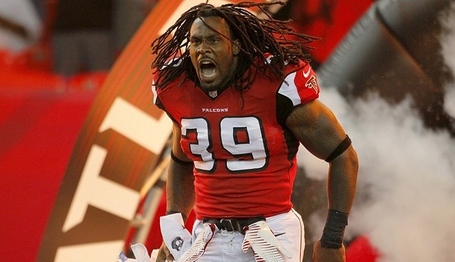 AW: How do you work with a young back like Devonta Freeman, knowing that he's competition for your job? Do you serve as mentor to younger running backs on your team?

SJax: For me, working with Freeman or any other young running back is the same. I believe they make me better because their natural hunger to be on field pushes me. And when he comes for advice, I'll give it freely.

AW: You've rushed for over 10,000 yards in your career. Only 28 players have accomplished that feat in NFL history. How does it feel to be in that group?

SJax: I don't think being in this group of running backs is something I'll fully appreciate until I hang up my cleats. That said, I want to climb much further up the ladder of great running backs.

AW: Can you give me a prediction for your stat line in 2014? What are your overall predictions for the Falcons?

SJax: I don't do predictions -- having been born and raised in Las Vegas, I know better than that. But what I will say is that I'm fully expecting to be back in the 1,000-yard club.

Thank you to Steven Jackson for taking the time to answer our questions. While he's approaching the end of his career, I think he still has plenty left in the tank for 2014. It will be nice to see him running behind an improved offensive line.