A Look at the Defensive Side of the Ball

Let's explore some of the data generated by Mike Nolan's group.

Share All sharing options for: A Look at the Defensive Side of the Ball

In my last post, I dug into our quarterly trends to try understanding how our offense operates. This time, I want to provide more information on our youthful defense.I'll remind you that this is a follow up to my initial article found here. I posted fewer graphs on our defense, so I took some time to dig a little deeper. Similar to the last post, I will take some time the answer any data requests you have. I have also posted a list of available fields to help you think.

Please, try to keep the requests specific to the Atlanta Defense so I can more quickly respond. I assume I'll have people asking comparative metrics to other teams or the rest of the league - feel free to ask, but I won't answer until a subsequent post. I promise, my next article will have some more broad NFL-wide information where I'll answer those questions and open the forum to similar requests. I do have all the plays for every team in every regular season game since 2008 - over 250,000 plays. That should be fun to look at when we get to it. 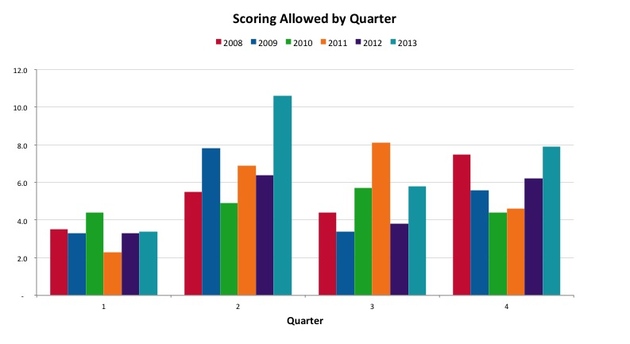 So our second quarter defense did not end up as bad as when I originally posted the 2013 quarterly information (we had given up an average of 11.1 points per game). Atlanta ended up conceding 10.6 points. Considering we only had 2 games left, that's a good thing - albeit a small sample size. We did not break at all against San Francisco in second quarter, then yielded 14 against Carolina in Week 17. Considering one touchdown against Carolina was a pick-6 miscommunications between Matt Ryan and Harry Douglas, I will remain positive that our second quarter defense shows some promise on resolving their woes. 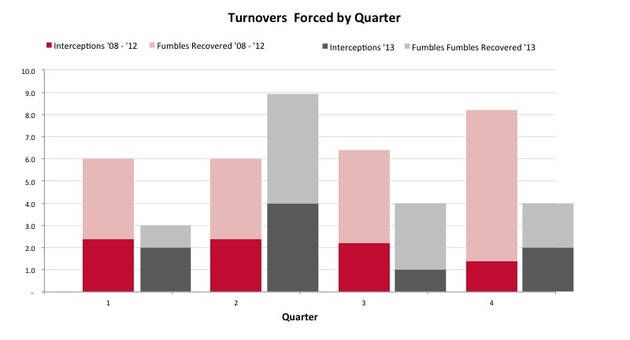 A young secondary and dismal pass rush obviously had an effect last year. Our defense fell short of the previous 5 years in all but the second quarter. This made me start thinking about how the opposing offense calls plays. First, I'll look at passing plays to see if I can explain the interceptions boost. 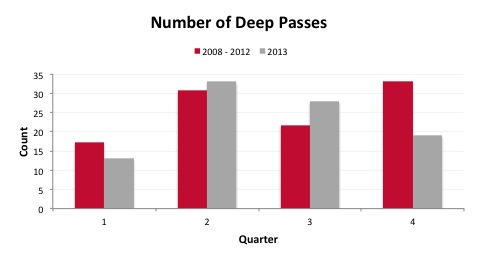 As you can see here, we don't see any significant spike in the second quarter to really explain to boost in turnovers forced. Could it be predictability in the direction? The short answer is 'No'. Without posting any mind-numbing graphs, the breakdowns by quarter look similar. In 2013, our opponents threw to the left side about 34%, middle 25%, and right 41%. The largest change compared to prior years shows a shift from the left to the right by about 5% (thanks, Tru).

I cannot capture play specifics, obviously, but the distance or location does not seem to suggest any predictability, at least. I wish I could find pass-pressure by quarter - the sacks alone show nothing, as well. So why does our defense create more interceptions in the second quarter? I'll let you share your thoughts.

I know a forced fumble can come on a passing play, but I'll turn to the running game to analyze the increased production. 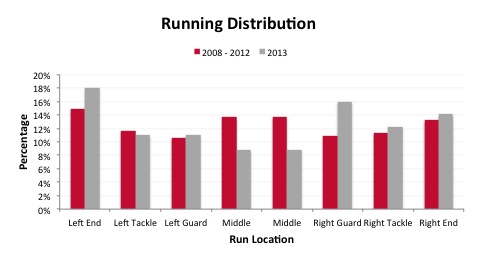 I listed 'Middle' twice - NFL.com doesn't list which side of the center the run is on, so for purpose of consistency, I split the information in half to cover both 'A' gaps. First, you'll notice a huge shift from the middle of the field (down to 18% from 27% of running plays). Also, opponents seemed to really pick up their efforts on the left end and Right Guard. I'm not necessarily sure the later two points connect with increased fumbling, but I think a shift away from the middle might. Just from memory, ball carriers seem to be more concerned about speed than ball security when running on the outside. I'm sure that plays a roll.

The above analysis shows increased scoring by our opponents, as well as the Falcons creating more turnovers. So where do the points come from? 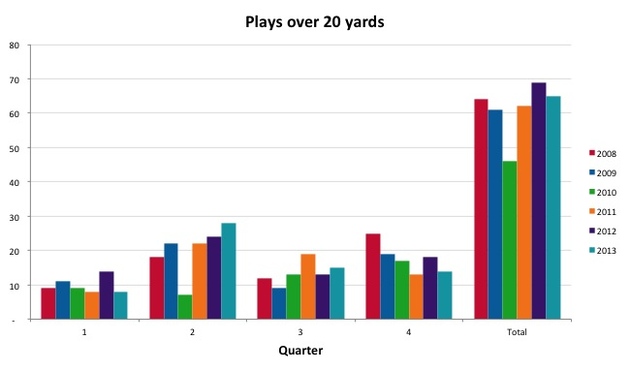 That second quarter trend is not pretty. However, it does partially explain the decline in performance. Atlanta surrendered 28 plays of 20 yards or more. Of those, 15 plays were for 40 yards or more. I was seriously shocked, and you'll see why below. 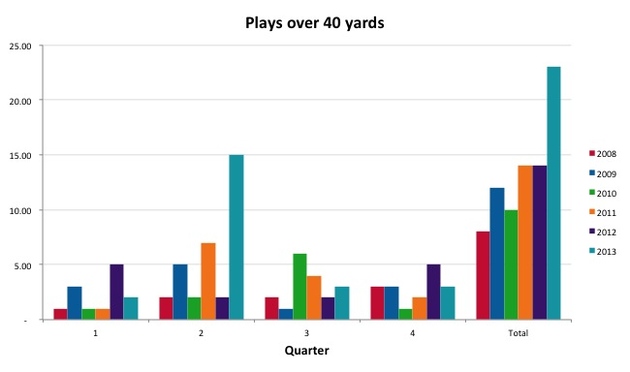 That. Really. Hurts. From 2008 to 2012, Atlanta averaged four 40+ yard plays per season in the second quarter. That's an additional 11 plays in 2013. I got curious to see what affect these plays had on the game. So, I looked at all plays for the Defense since 2008. I counted the number of times that any play occurred at each specific yard line. I then summed the number of eventual points given up on the drive, therefore creating a plot showing expected points allowed at each field position. I know that the down and distance impact the probability. For the sake of simplicity, let's say this is good enough (for government work). 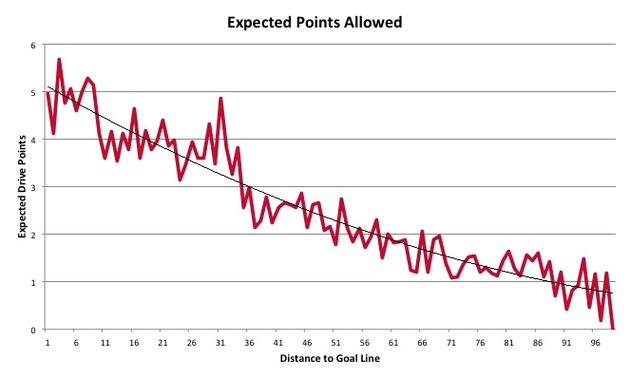 This looks as expected: as a team initiates a play farther away from the Goal Line, their probability of scoring drops. I took this graph, layered on a best-fit line, and extracted that formula for our use. As I said above, Atlanta gave up 15 huge plays, which resulted in 9 Touchdowns, 4 Field Goals, and 2 Forced Fumbles. I took the field position from where each big play began and calculated the expected points against the eventual points scored. What was the net result? Teams scored 75 points on these drives compared to an expected 29. That 46 points swing would be enough to move our defensive ranking in points allowed per game from 27th to 22nd in 2013.

So can we expect not to give up as many plays in 2014? I believe so. Of the 15 plays of 40+ yards, 12 were passing plays...and that makes sense. We had a young, injured, and bewildered (DeCoud) secondary that seemed to hand points to the opposition. I do believe the experience and competition in our Defensive Backs should put Atlanta in a better position than in 2012 with Asante Samuels and Dunta Robinson. As long as our pass rush improves in the slightest, I think we will throw objects toward the TV at a much lower rate.

And Now, it's Your Turn

Feel free to request any detail you would like to see. I will do my best to answer any and all questions. If the questions doesn't necessarily pertain to this thread, still let me know and I'll make notes to include it in one of my upcoming articles. I don't have specific times to set aside, but I will check back frequently to post answers in the comments.