Sander Philipse of Bucs Nation sheds some light on what's going on in Tampa Bay.

Share All sharing options for: NFC South offseason report: A look at the Tampa Bay Buccaneers

The NFC South is progressing into one of the toughest divisions in football. No team ever repeats as division champs, a trend that will probably continue in 2014.

As the other three NFC South teams have changed a bit over the offseason, I wanted to find out more about each one. We'll be taking a look at the rest of the division, starting with the Tampa Bay Buccaneers.

The Buccaneers have an entirely new coaching staff, several promising rookies and a quarterback debate to deal with heading into the 2014 season. Sander Philipse, the managing editor at Bucs Nation, answered some of my questions about Tampa, offseason changes and what the Falcons will face this fall.

Alex Welch: Now that we're past free agency and the draft, how are the Bucs looking overall? What were the biggest areas they improved at? What moves did you disagree with?

Sander Philipse: The Bucs look pretty good, overall, but there are plenty of question marks. The biggest improvement will be the defensive line: adding Michael Johnson finally gives them a quality edge rusher, while Clinton McDonald should be a terrific addition as a pass rusher next to Gerald McCoy.

The move I disagreed with most was leaving holes at offensive guard: the Bucs improved their offensive line a little, but they did so by replacing players, rather than adding them. Unless Carl Nicks is going to play this year (and that seems unlikely at this point), offensive guard is going to be an issue for them.

AW: What did you think of their draft? It looks like the Falcons should be worried about Mike Evans right away. How good will he be his rookie season?

SP: I really liked the Bucs' draft, if we leave aside the fact that they chose to address running back over wide receiver in the third round. Mike Evans and Austin Seferian-Jenkins both add a lot of size and ability to the passing game, while Charles Sims should be a very good third-down and change-of-pace back. They gave their offense a much-needed talent boost.

Mike Evans has the size to make an instant impact but historically, wide receivers have not done all that much in their rookie season -- the average for top 10 picks and first-round picks both is around 500 receiving yards. That's solid, but hardly a game-changer. The fact that he ran about three different routes in college won't help him, as is the fact that he's been sidelined with a hamstring issue for a few weeks now, causing him to miss practice. While he should be a good player in the NFL, it may take a while for him to make a real impact.

AW: The coaching staff is entirely different with Lovie Smith,  Jeff Tedford and Leslie Frazier coming in this season. What kind of schemes are we looking at on offense and defense? 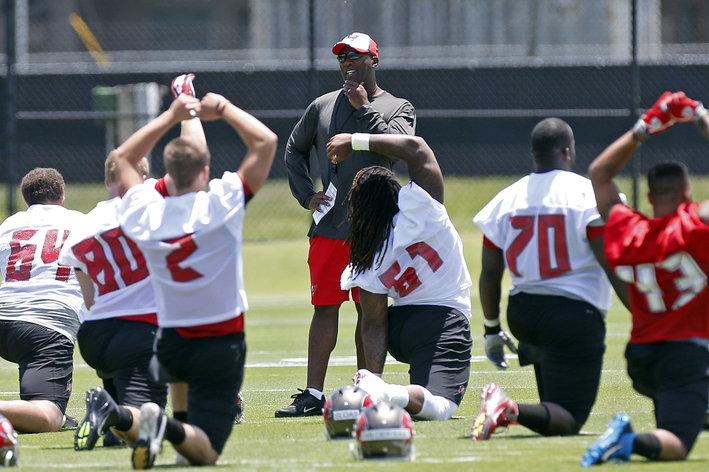 SP: On offense, Jeff Tedford is going to run a very diverse scheme. He will try to base it on a strong running game with a play-action element to the passing game, and multiple formations and personnel groupings to create matchup problems for the defense. You'll see lots of two-tight-end sets, a lot of pre-snap movement, a lot of quick (screen) passes to get the balls in the hands of playmakers, and a lot of creativity when running the ball.

On defense, you're going to see the good old Tampa 2 philosophy again. That means primarily pressuring the quarterback with four players, and playing more reactive football on the back-end. It doesn't mean you'll see Tampa 2 as a base coverage, as Lovie Smith and Leslie Frazier have run a lot of Cover 3 and man coverage concepts in years past, but the overall philosophy will be what you saw in Tampa before Jon Gruden was fired.

AW: Follow-up to that, Tedford has never been in the NFL as a player or coach. Does that worry you at all, at least in the short-term? The Bucs loaded up on offense in the draft, how dangerous will they be in 2014 with all the young talent?

SP: That is a bit of a concern, although most observers have said that he ran a pro-style scheme in college and will be a great fit for the NFL. Still, there's a transition there, and that could be an issue -- or it could be a boon, as no one really knows exactly what he'll try to do. See also: Chip Kelly last year.

The entire offense is one big question mark. Can Josh McCown retain some of his 2013 magic? Can Mike Evans make an early splash? Will this offensive line be able to carry the offense, with better pass-blockers than run-blockers and no offensive guards? Will Doug Martin return to his 2012 form, or are we looking at another plodding year like we saw in 2013? I honestly don't have a clue, at this point -- I wouldn't be surprised with a poor offense, nor with a pretty good one.

AW: What's going on at QB? Are we going to see Glennon or McCown, or is it too early to call?

SP: Josh McCown will most likely start. Lovie Smith basically anointed him the starter when they signed him, the coaches love his leadership and command of the offense, and he's generally just looked better than Mike Glennon. Unless McCown really collapses or Glennon does some unexpected, incredible thing, McCown is going to be the starter this year.

AW: Give me your realistic expectations for Tampa in 2014. The NFC South keeps getting tougher. Where does this team stand?

SP: I think the Buccaneers will have a terrific defense this year, but the offense is more of a question mark. With the Carolina Panthers primed for a big step back after blowing up their offense, and the Falcons still lacking a lot of depth and quality, especially on defense, I think the Bucs are probably the second-best team in the NFC South. As long as the Saints have Drew Brees and Sean Payton, they have to be the favorites to win the division, though.

The Bucs finished No. 17 in yards allowed per game in 2013. That ranking will go up this year, but I still view Tampa as a work in progress. Making a transition with three new coaches, along with the fact that they don't possess a proven quarterback (say what you want about McCown, Trestman worked wonders with him in Chicago), puts this team up in the air at the moment.

Tampa is certainly improving. The offense has several new weapons, and the defense is loaded with talent. Two tough games for the Falcons once again in 2014. What are your thoughts on the Bucs this year?