Quarterly Trends for the Falcons' Offense

Share All sharing options for: Quarterly Trends for the Falcons' Offense

I wrote an article back in December on our beloved team's quarterly performance. Many of you requested some trends since Mike Smith and Thomas Dimitroff took the reigns. So, as promised, I will post many of the same graphs, grouped by quarter with the years color-coded. That way, you easily look at the quarterly trends from year-to-year, as well as the difference between quarters.

I will also let you in on a little secret: There's a good reason this took a while to gather. Instead of scraping the NFL.com website (as done previously), I've automated the process for pulling play-by-play information through PFR's handy search tools. I developed some hooks form my computer to download the information directly into a database so that I can capture and analyze the information much more efficiently. For now, let's isolate this article and data requests to only the Falcons' offense since 2008. In due time, this should create a lot of fun for us...well, me, because I'm a nerd.

I also know that information like this generally breeds more and more questions. I'm going to dedicate some time to respond to any request you may have for information. Here's a link to a list of fields I currently have available so that you can be as creative as you want! I'll get to any requests I can and am dedicating some time between 7:00 - 9:00 pm EST to fulfill any requests. I'll be online and active in the comments! 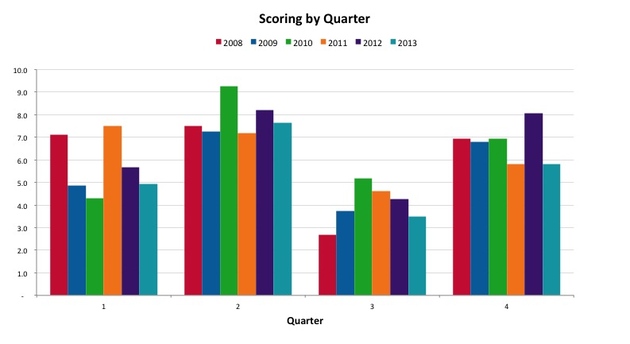 The Falcons have never been a balanced scoring unit outside of maybe 2008 where three quarter are relatively even. As a whole, the third quarter has been the bane of our offense, though I'm surprised to see the first quarter so close. That's why our team has such a strong start. As far as the offense is concerned, it's definitely a tale of even-numbered quarters. 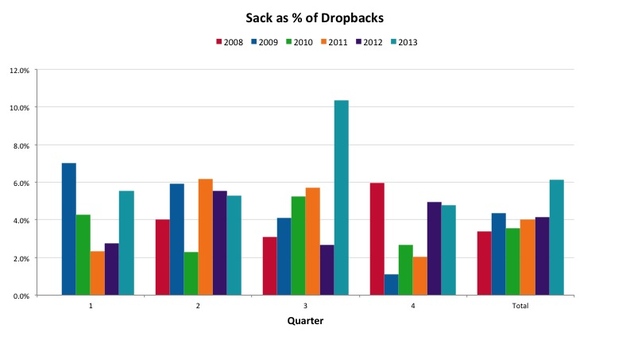 The outlier really jumps off this graph. The third quarter in 2013 represented the single worst quarter in the past six years in terms of the sack percentage. If that percentage lined up with the rest, Matt Ryan would have had 7 fewer sacks on the season. That would have made him only the 15th most sacked QB in the NFL instead of third. It's interesting that the first, second, and fourth quarter all show some variability in performance. The third quarter shows a pretty clear trend upwards, which makes me think. Has our play calling become more predictable?

Our average position on third down is largely unchanged when comparing entire seasons. The breakdown by quarter, however, shows something a little different. Our distance to-go on third down has been trending up during the third quarter, lending a hand to the increase in sacks (along with other variables, of course). 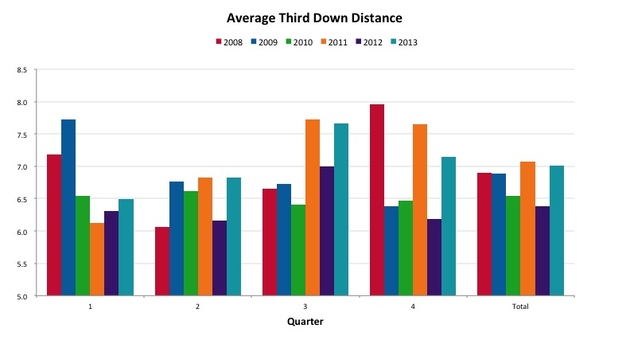 By extension, we performed worse on first and second down during the third quarter. Full circle - it comes down to either play calling or execution. On a more positive note, we've experience substantial improvements since 2008 - 2009 in the first quarter. The average distance improvement is roughly a yard, which can make a big difference for an offense.

The proportion of passing plays doesn't increase as severely in the third (graph below). Actually, the third quarter generally looks more balanced than the second and fourth. It's possible that teams simply adjust better than we do when diagnosing and predicting plays. 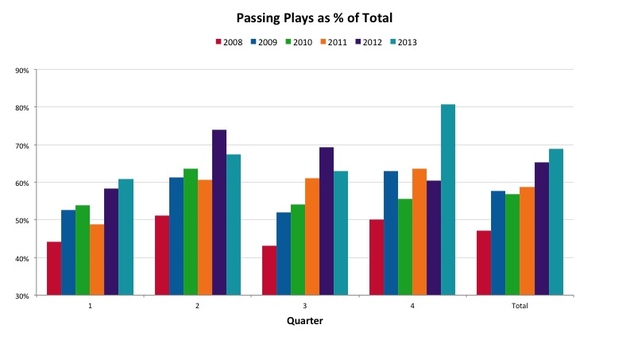 I think it's pretty obvious that the 2008 first round draft pick shifted Atlanta's offense in a major way. Yes, the entire league has become more pass-oriented, but Atlanta's increase has been far more pronounced. The 2013 season exacerbated the issue even more, being as we started playing catch-up all season. The performance in the fourth quarter last year proves that. 80% passing plays? Good. Lord. 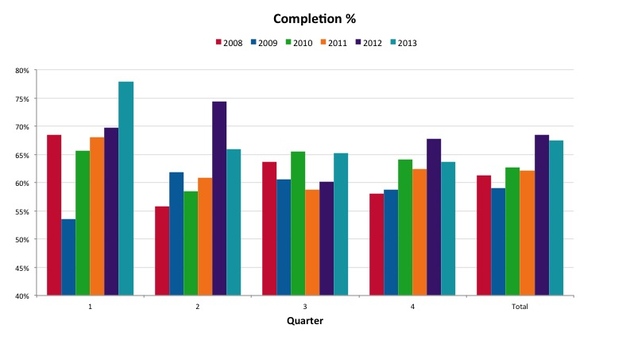 I guess I can't necessarily say this is a chart for Matt Ryan. I mean, Chris Redman, Dominique Davis, and Shann Schillinger made a combined 169 attempts. In reality, it doesn't really change much. The "Falcons" improved their completion percentages within each quarter, though it deteriorates after the first. That reduction is far more noticeable in 2013. Due to the offensive line, our playbook shrank a bit, allowing mostly short passes. This increases the completion percentage early in the game, while making our predictability increase as the game continues.

Now I know I didn't include this in the previous article, but I stumbled across this and found it interesting... 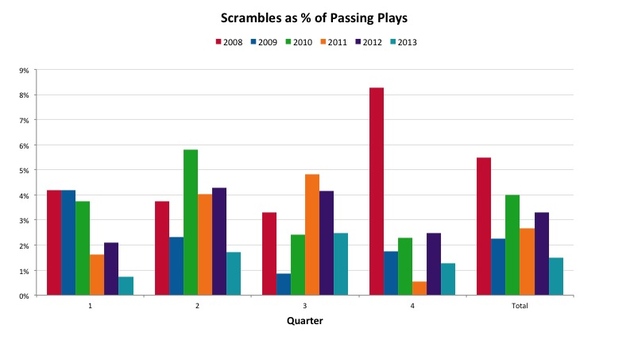 Matt Ryan has been scrambling less and less as years go by, and each quarter presents the same trend. Two things really surprised me: 1) Matt Ryan frequently scrambled early in his career, and 2) he scrambled 80% less in 2013 than in 2008. I hope we see this change with an improved interior line.

Now, with the increased and more predictable passing, it's no wonder the sacks have been piling up for Matt Ryan. Our opponents are bound to force turnovers. Take a look at the chart below. I pieced together the turnovers by quarter a little differently as the yearly breakdown looks very, very ugly. Instead, I averaged the number of turnovers by quarter during the five seasons preceding 2013, then compared them to last year. 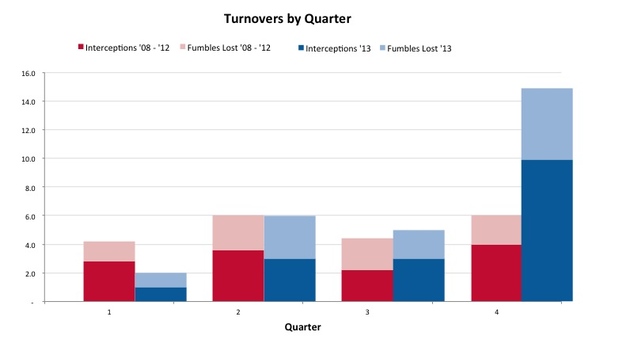 Despite all the issues during 2013, we continued to protect the ball pretty well until attempting a comeback. Matt Ryan threw 10, yes TEN of his 17 interceptions during the fourth quarter. I'll add the friendly reminder that Atlanta threw the ball on 80% of plays during this quarter. Can we really blame him for this? This is not to say he should be blame-free, but we at least have to admit that the stat line was seriously affected by play calling rather than execution

While poking around with the data, I thought it may be fun to share some of the things I found. This may help get your creative juices flowing, as well!