Atlanta Falcons Draft Preview: A History Of The Sixth Pick

A retrospective look at which players have traditionally come off the board at 'ole No. 6.

Share All sharing options for: Atlanta Falcons Draft Preview: A History Of The Sixth Pick

The NFL Draft fast approaches, and as it does it looks more and more likely that the Falcons move out of their currently slotted sixth overall pick. We all know Thomas Dimitroff's history as a general manager.

Then again, "NOBODY KNOWS ANYTHING," as everyone from mock-drafters to Mike Florio will be quick to point out. He concludes his odd report regarding Atlanta's non-interest in Jadeveon Clowney as such:

So, basically, it still remains impossible to know what to believe at this point.

Good to know, Mike. I digress.

For the purpose of today's exercise, let's say the Falcons do stay locked into the 6-hole. Past results are not always indicative of future events. But by looking back, perhaps we'll gain a little more insight as to what caliber of player Atlanta could land at No. 6. At the very least, it's entertaining to read some of these names.

First up, we have every player drafted with the sixth overall pick since 2003. 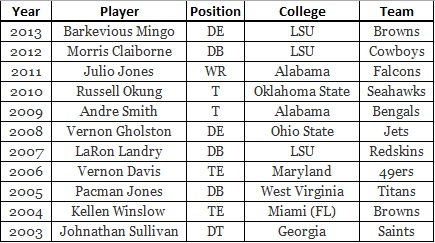 Not sure I'm familiar with this "Julio Jones" cat, but I certainly remember the rest of these picks.

Of these 13 players, six were products of Southeastern Conference schools (SEC!) and five were either offensive linemen or pass rushers. There were also, surprisingly, two tight ends and a safety.

As for how these guys turned out, obviously their careers run the gamut from "elite weapon" (Davis and Jones) to "colossal bust" (Gholston), or from "I'm a soldier" (Winslow) to "LOL Saints" (Sullivan, who was out of the league by 2006). We also have Pacman Jones who, uh, did a lot of interesting things with the Titans.

As for the pre-2003 draft selections, I chose to highlight some of the more interesting ones:

Plenty of great players have been taken here over the years, and even a few Hall of Famers such as Jim Brown and slingin' Sammy Baugh. Oh and look, there's Trent Dilfer.

Other guys not featured in the graphic include defensive linemen Kevin Carter, Corey Simon and Grant Winstrom, all of whom went on to have productive careers. In fact, 10 defensive linemen have been selected with the sixth pick since 1983.

Still, you'd have to be incredibly optimistic to think that hold true this year and a guy like Jadeveon Clowney falls all the way down to No. 6. Not happening.

In any event, this presents the nice, wide spectrum of how this pick could turn out for Dimitroff & Co., assuming they stay put. The Falcons could wind up with a future HOFer that spurs an improbable turnaround season, or they could land Gholston 2.0.

We only have to wait six more days to find out which player that will be.