Spoiler alert: It's not his favorite.

Share All sharing options for: Mel Kiper Weighs In On Ra'Shede Hageman Pick

No pick kicked off more earnest debate than the second round selection of Minnesota lineman Ra'Shede Hageman. Some believed he would be great, others believed he was ticketed to be a bust.

While I'm not a gigantic fan of Mel Kiper, I know many of you put considerable weight into his analysis and that of his brethren. In that spirit, we had the opportunity to ask him about the Hageman pick, and I thought many of you would be interested to see the answer.

Our own Alec Shirkey asked the question. The full transcript below. 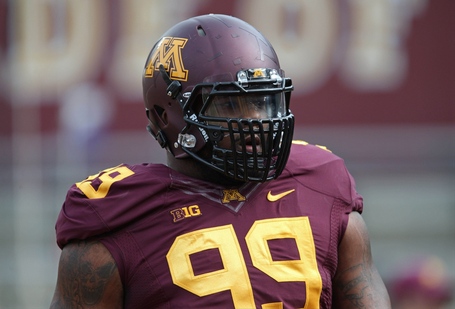 Alec Shirkey: Moving towards the Falcons draft, a lot of people were on board with the Matthews pick in the 1st but the team didn't address an edge pass rusher until the 4th round. What are your thoughts on that and the potential that Ra'Shede Hageman brings to the defensive line?"

Mel Kiper: I would've probably looked more at Van Noy. I like Van Noy a lot. Jeremiah Attaochu from Georgia Tech was another one that could've been added at that point in the draft. One thing about Hageman, he's batting down a lot of passes. He's a former basketball player with great wingspan. They got to motivate hi to play four quarters and maximize that ability. Southward's a playmaker. Like the Freeman pick.

Shembo, he can go point A to point B. That's what he can do. He's a designated pass rusher. Spruills, Smallwood and Starr are nice late-round picks. I agree with you that they didn't get that kind of player, that impactful pass rusher, unless Shembo is the guy. But they did get help for Matt Ryan in Jake Matthews and they did get help in Devonta Freeman, and the rest of the draft picks were all defense. So the defense gets 7 of 9 picks and you get two key offensive players for Ryan. I have no issue with it. You would've liked if you had a proven entity, a guy you're certain is going to be a pass rusher for you.

But that's the thing. They opted to go Hageman over that guy. They went Hageman over Van Voy, Hageman over Attaochu. And that's who he'll be judged against over the next few years.