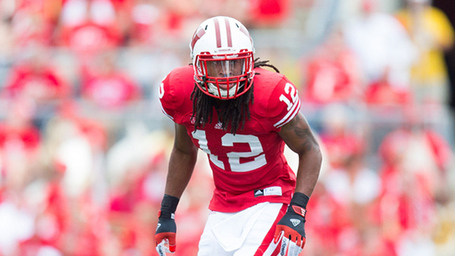 At first glance of the Falcons' 2014 draft class, one pick in particular has stood out to many (myself included): that of safety Dezmen Southward of Wisconsin; a third-round pick, in this class of prospects, spent on a Free Safety who probably isn't even the best one on the roster right now.

The problem that has kept cropping up for me is Southward's fit in our 2014 defense. There are those that believe he is the starting Free Safety in every defensive package either simply because we picked him 68th-overall in the draft or because they don't believe Dwight Lowery has the skills to pay the bills, per say.

(Let me be clear: I am fully aware of defensive coordinator Mike Nolan's interchangeable usage of his safeties, so when I say Free Safety, I mean the same role that Thomas DeCoud made laughable started at since Nolan's arrival in Atlanta.)

Let me be clear (again): When I say "base defense," I mean the look which we deploy most often: in 2013, NFL defenses showed some variance of the Nickel (three down-linemen, three linebackers, five defensive backs, or a 3-3-5 look) defense 45-percent of the time.

So here's what I'm getting at: Dezmen Southward, among other things, was the missing piece to our perfection of the 'Big Nickel' defense. This look contains three down linemen and three linebackers with five defensive backs: two cornerbacks, two in-the-box safeties and one deep safety over the top. The two in-the-box safeties need to be able to play man on receivers inside and be enforcers against the run.

Dwight Lowery is a natural zone-cover man with great instincts but is a less-than-stellar run-supporter, and thus would be ideally suited in a role like the one of the over-the-top safety in the Big Nickel. Dezmen Southward? Well, as I'm sure you've heard by now, some of his best traits on-tape consist of taking great angles to the ballcarrier and very stellar tackling, with the body to hold up doing it (52 games straight played in college). Not to mention that he played quite a bit of CB and covered the slot in college; his greatest trait though is, of course, his athleticism, which is arguably top-five in the entire draft class. His weaknesses, at least as of his last game in college: getting beat over the top and natural ballhawking. If he had one predefined fit in a defense, it was as this in-the-box Free Safety in the Big Nickel defense. And as for the third safety in the set: it goes without saying that this other in-the-box safety would be WillyMo and, as I've described it, he would simply excel in the role.

As for the other obvious fits on this D: the goal of the Big 3-3-5 is to "stop the run and outwit the quarterback," as originator of the defense Fritz Shurmur described it. Three down linemen with the goal of stopping the run? Check --Paul Soliai manning the middle with Ra'Shede Hageman and Tyson Jackson on either side. As EonKayoh described this front three: "950 pounds of meat." With the three linebackers, you could get very creative -- whether you want to blitz from the weak-side with an edge-rusher (Jonathan Massaquoi), imitating his role in the 3-4, or have three quick, pass-coverage LBs (Sean Weatherspoon, Paul Worrilow, Joplo Bartu), or whatever tickles your fancy for the situation at hand, you can make it work with this scheme.

All of that said, let's have a look at a potential base depth chart:

As the listed linebacking options should amplify: Nolan can get very creative with the Big Nickel, and he has, of course, done so before, but granted that we haven't had anything close to proper personnel to run it. In my own opinion, the Box FS was the key missing piece to this set, and if we want Southward to see the field in 2014 (and I assume we very much do for developmental reasons), this should be the look that best utilizes his talents in conjunction with the rest of our defense.

By 2015, if Southward's development is going per the plan, he is our starting FS and is a budding star in this league. His ceiling, if only due to his athleticism, is being one of the best safeties in the league (though his floor could very well be a career backup or a simply decent box safety).

But these are just my musings on the matters of where our defense may be headed this year and Dezmen Southward beyond it. What say you?