With most of the Pro-Days complete, I'll show some of the biggest standouts by position.

Share All sharing options for: By the Numbers: Combine & Pro Day Standouts

With the NFL Combine and Pro Days (mostly) in the past, it's time to look at the athletic standouts. This will hopefully give us a nice list of players with potential that may be available in the mid-to-late rounds.

Just to explain my methodology, I first gathered as much history as I could. I looked through Combine and Pro Day performances, identifying over 25,000 players, positions, weights, and heights, though unfortunately only about 13,000 had event information. I still think it should be plenty for this quick view! As most performances take weight into consideration, I plotted weight against each measurement to find a "normal" trend line. Every event , with exception of the bench press, is highly correlated with performance (60%+), with the bench still showing 40%.Then, I took each players weight, calculated the expected performance in each event, and compared. I counted the number of events where a prospect performed above average

I eliminated players where three or fewer measurements exist. I only used the 40 yard dash for this since I have twice as much data than the 10 or 20 - I'll still list those if I have 'em. I prioritized Combine numbers over Pro Day for speed measurements, and also added .05 seconds onto any Pro Day speed...maybe I should have added more for the UCLA players.

First, here are the players with a Projected round between first and third rounds, not including 3rd/4th borderline players. PS - you can click on the images for a larger view! 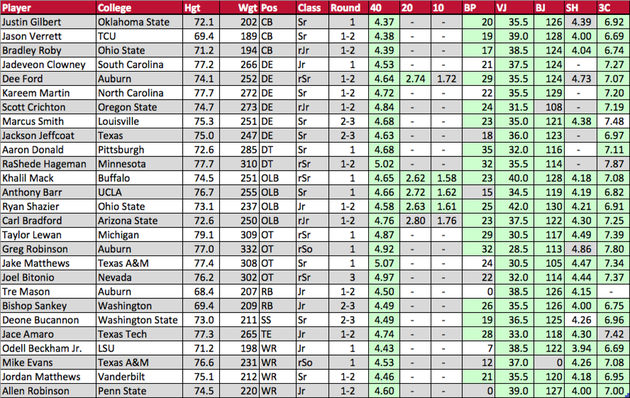 Not that it holds much weight, but it's interesting to see the players missing from the list. Again, the guys ranked as top prospects have production and game film to back up their position in the draft.

Below, I have the top athletic performances for the rest of the group, where they performed above average in all events completed, minimum of four. 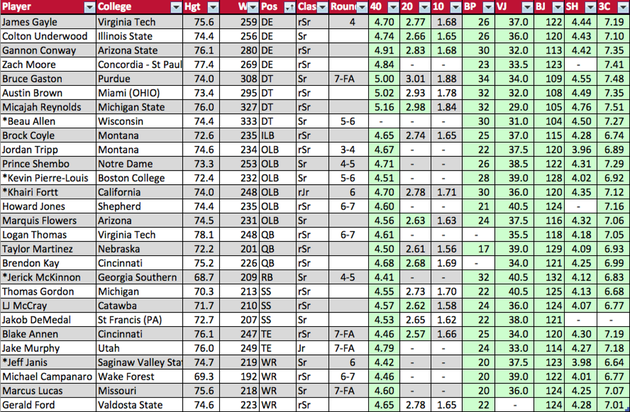 I have noted my favorites of that group with an asterisk. I will also admit that I haven't familiarized myself with a ton of late round or potentially undrafted players. This is obviously where you help. I can't handle 1,000 players on my own!

And finally, here are the rest of the top athletic performances of the off-season, bettering the average in five of six events: 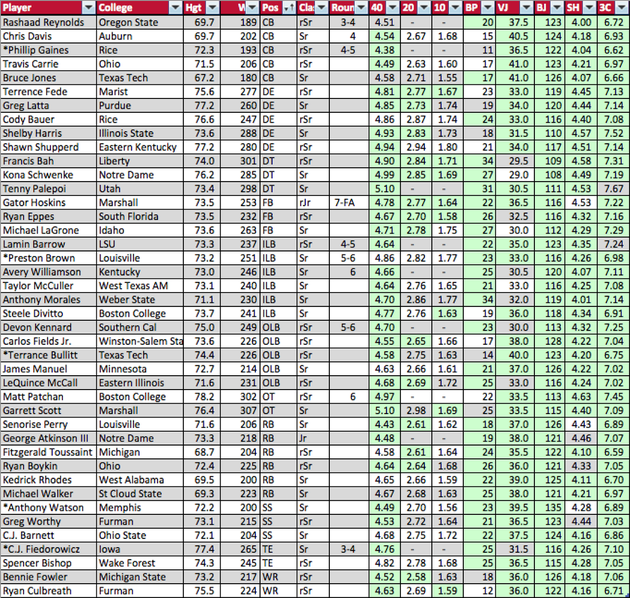 So there you have it. If you have knowledge on any of these players, feel free to share! I would be curious to see if these Combine and Pro Day numbers are more than just numbers. Who do you like?

As a side note, I am working on applying my Position based formulas to evaluate a grade potential. Look for that, too. I'm also working on providing access to my prospect database. I probably won't have it done before the draft because work takes up too much time, but I will try to finish soon.