That is, well, our question. AND IT'S LIFE OR DEATH.

Share All sharing options for: Falcons 2014 Mock Draft: To Trade, Or Not To Trade?

Mock-draft season is in full swing.

I am no scout (at least, I don't think I am). I have zero inside information. And while I may have correctly called two of Atlanta's draft picks last year, that's only a 25% hit rate. Mock drafts should always be taken for what they are: educated guess that have entertainment value. Don't think of them as serious sports writing.

With that said, I didn't pick random names out of a hat. I did some background research on the prospects, the team's drafting tendencies under Thomas Dimitroff, the past drafting tendencies of Scott Pioli and of course considered the team's positional needs. Hopefully, with all of that at my back, I crafted something plausible.

As with Desmond Trufant last season, this looks like the pick mostly everyone sees coming. In this bout with the hypothetical, I see the first five picks playing out this way:

To those of you pointing out that Sammy Watkins would be the best overall player here: I agree. However, remember Arthur Blank vocally expressing his displeasure at the offensive line's performance in 2013. He wants his $100 million franchise quarterback protected and not fearing for his life on every dropback.

Matthews can provide that protection immediately. You can plug him in at right tackle and play him week one. You could even try him at left tackle and slide Sam Baker over to the right side, if Mike Tice is the creative type. Regardless, Matthews gives the Falcons a polished prospect with sound footwork and some of the best NFL genes you're going to find.

As for the lack of a first-round trade, I'll say this: I hope Dimitroff and his front office compatriots realize that by whiffing on this year's free-safety free agents, the needs on this year's roster are too numerous to justify moving up for Jadeveon Clowney or Khalil Mack. Both are excellent players, but you need 11 on the field. Them's the breaks.

It was one thing to move up for Julio Jones when the team felt it was one player away from a Superbowl. This team, however, is several players away from even making the playoffs right now. Depth on depth is needed.

At this point, it seems pretty clear that the Falcons are looking at pass rushers that could go in the second round.

Lawrence certainly fits that billing. He was mostly a 3-point rusher in a Boise State defensive scheme that heavily relied on the 4-3, but at 251 pounds he looks to be a little small for that role in the NFL. He was productive in his two years with the Broncos (18.5 sacks), and like Mack he has experience lining up all over the formation.

Pursuit is great, he's a strong attacking rusher and he looks both fluid and menacing on the field. Maybe Jeremiah Attaochu is the better player here, but I see Lawrence as someone the front office will want to draft.

Reynolds, for whatever reason, seems like a Mike Nolan guy to me.

This might look like a reach on paper. Then again, consider how badly this team needs another name at free safety coming into the season. Maybe Deone Bucannon or LaMarcus Joyner are on the board here, but I believe Reynolds has been underrated by the media.

He is the anti-DeCoud: great angles to the ball, sure tackler, sound run defender and has experience lining up against the slot receiver or tight end. He did miss an entire season due to an ACL tear three years ago, which is scary, but I think Reynolds is a guy Nolan will push for as hard as he can.

**Trade: Atlanta sends a 4th-round and 6th-round pick to New England in exchange for its 3rd-round pick

Surely you didn't expect Thomas Dimitroff to make it through an entire draft without trading up.

One of the biggest remaining needs at this point in the draft would be tight end. Some are hoping Fiedorowicz falls all the way to the fourth round, but again here I see a player that has not been given the proper credit as a traditional tight end with intriguing athleticism that was simply underused at Iowa. Atlanta may have to jump a handful of teams, including the ones with 3rd-round compensatory picks, in order to land him.

The Falcons always like tight ends that can block. More importantly, they also want someone talented enough to push Levine Toilolo for a job right away. "Fiedo" fits the bill.

Will West be around this late? I have no idea. But almost every year it seems like teams can land gifted running backs later on in the draft.

West is no doubt gifted, as he put up some insane rushing totals at Towson (2,509 yards and 41 touchdowns in 2013). He's a power back that thrives on contact, built somewhat like Michael Turner (5'9 and 225 lbs) but with better hands. He's not quick or flashy and his overall game needs some definite refinement, but he could contribute this season if needed and shows the potential to develop into something greater down the line.

I would have some reservations about the team addressing linebacker this late. At the same time, the team maybe believes that a healthy Sean Weatherspoon and more positive development out of Paul Worrilow and Joplo Bartu could be enough to get the inside linebackers through 2014.

Brown provides not only depth on the inside but the size and physicality one would need to take on and beat blockers when playing in a 3-4 alignment. He's not a coverage linebacker by any stretch of the imagination and would likely come off the field on third down in favor of Weatherspoon and another. But for a defense that seems set on stopping the run first next season, considering the additions of Paul Soliai and Tyson Jackson, Brown would only help the team in that respect.

The sixth-rounder was traded away, so the Falcons wait until the 7th to address fullback. It's clear that after Bradie Ewing's departure and the reports of aging Greg Jones working out with the team that this is an area of concern. The front office wants someone to compete with Patrick DiMarco.

Hewitt is like Ewing in that he does not possess great size or athleticism. But he's a heady player that shows solid technique and awareness as a lead blocker as well as the potential to contribute in the passing game (caught 34 passes and five touchdowns in 2011).

It would not surprise me to see the Falcons double-dip at safety. Darby was an experienced starter with the Sun Devils that shows good athleticism and physicality while flashing ballhawk skills every now and again. However, he is undersized and lacks discipline as a roamer, meaning he could fall pretty far in the draft.

More double-dipping. The Falcons only have four inside linebackers on the roster right now in Weatherspoon, Worrilow, Bartu and Dent. They'll want as much depth as they can get there, which Tyler provides. Like Brown, he's a run-first defender that should be able to contribute on special teams. 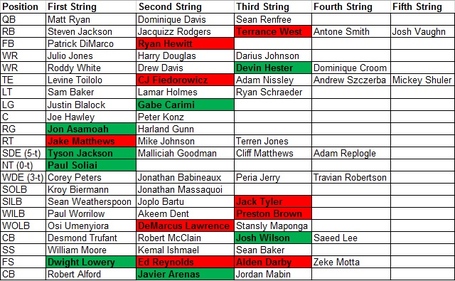 As for UDFAs, I'd imagine the Falcons bring in at least one quarterback, another tight end, a couple of offensive guards and another pass-rusher or two.

Well, that about wraps it up. Feel free to flame, agree, offer your own thoughts on the draft, etc.