Making A Case for Aaron Donald

The star defensive tackle has been proving people wrong for years. See why I believe the trend will continue.

Share All sharing options for: Making A Case for Aaron Donald

I'll admit, I have a bit of a man-crush on Aaron Donald. After seeing Caleb's crush Odell Beckham, I know I should shy away...I just can't. The Free Agency period smashed my dreams of drafting him, but I still have some hope. With the additions of Tyson Jackson and Paul Soliai, Donald appeared to be a poor scheme fit. He's touted as a premier 3-tech, one-gap lineman. However, his versatility shines through his season game tape and the Senior Bowl. In other words, his performance has spoken volumes, but his "numbers" seem to breed hesitation about his ability to perform in the NFL. I do believe he can be a successful 5 tech and move around the line, but regardless of his fit in Atlanta, I'd like to see if everyone's reservations are valid.

To provide background on the analysis below, I used ProFootballReference's Approximate Value (AV) scores, Pro Bowl selections, sacks, interceptions, passes defended, and PFF Grades. On the AV scores, they try to assign a whole number value to player's overall performance - you can click the link to get more detail on how they go about the calculation if you care. Like anything, it's imperfect, but tends to put players in the appropriate realm.

Like always, I want to reiterate that I don't hide any analysis I performed unless it's irrelevant. If you have curiosity about something, don't hesitate to ask for me to do something further - there's a good chance I have the information on hand.

For those of you unaware of this website, it's a great resource for finding draft, player, team, or season information. Another side benefit: they format the information in a scrape-friendly table that includes height. I gathered all individual season performance for Defensive Ends and Tackles for years 2000 through 2013, which I'll summarize below. To right-size some of the charts, I had to multiply the average number of ProBowl Selections and Interceptions. The multiple is not important, just the comparative measure. Without further ado: 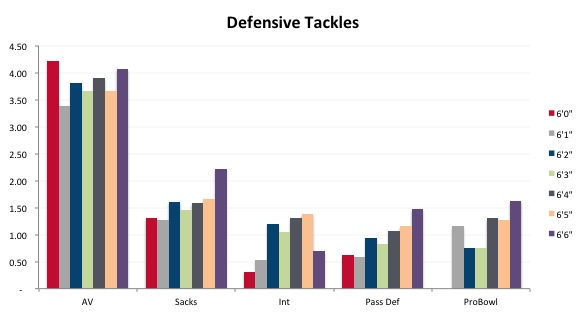 At 6'1", pundits like to point at his small stature as a limitation for performance in the NFL. The players at 6'6" seem to show a bump in sack averages, though no significant difference shows between the other heights. Donald may expect a lower number of interceptions and passes defended, but the rest of the measures show some unfair bias towards height. In regards to interceptions, the average lineman records less than one in his career. The difference between .25 and .5 is large proportionally, but the whole number is rather insignificant.

Hopefully you can at least you can see that the AV ratings seem to adequately represent performance. With that, I'll get to what I really want to show: a scatter plot for height and performance. Remember, AV grades are whole numbers, so a good bit of the related heights and grades can overlap: 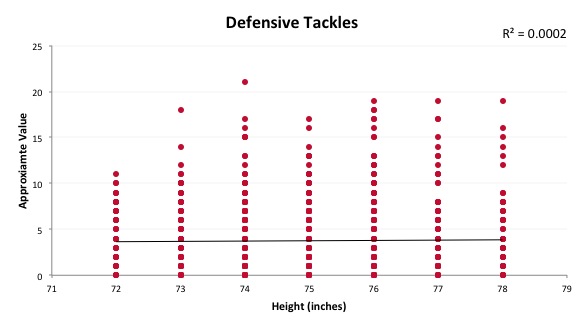 The R-Square number you see describes the extent to which the variables relate. The value ranges from 0 to 1, and you can probably guess that the closer the number is the zero, the less the variables affect each other. A value of 1, for instance, would say that one variable changing is 100% responsible for a change in the other - the dots would be in a straight line. On the other side, this r-square essentially says: Height doesn't matter.

Just to expand the above, I'll post both the same graphs, except to show Defensive Ends. NOTE: The heights on these graphs start at 6'1" instead of 6'0" due to the number of events available for significance: 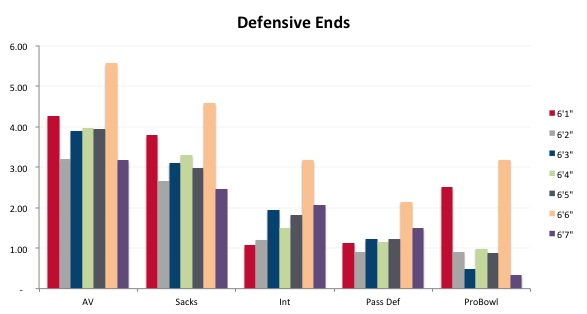 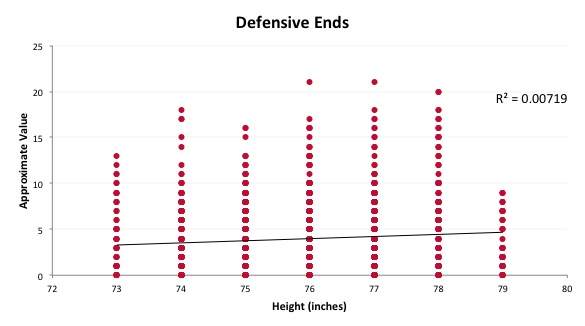 Again, players at 6'6" have superior performance across the board. However, look at the variability in all other heights. That tends to make me think there's no perfect number, really. Regardless of what I believe, the next best height is 6'1" except in the interception category...I refer you to above. Additionally, the r-squared value shows a lack of correlation between performance and height. Even if I remove players at 79 inches (6'7"), the value only jumps to .0115. Therefore, I'm not sold that Defensive Ends have a height requirement, either.

Just for my own curiosity, I replicated the analysis using only draft picks form the first, second, and third rounds, which yielded similar results.

I'll simply show the scatter plots for this one, as I'm sure people are more familiar with what PFF does: 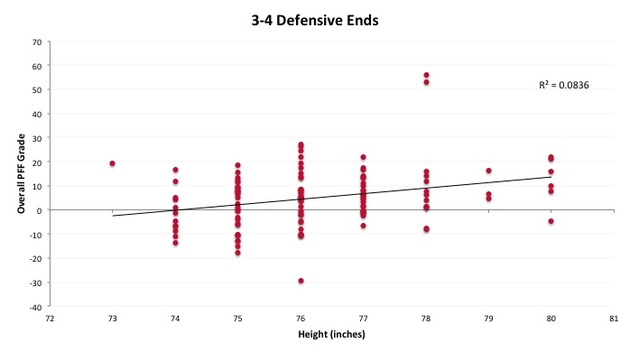 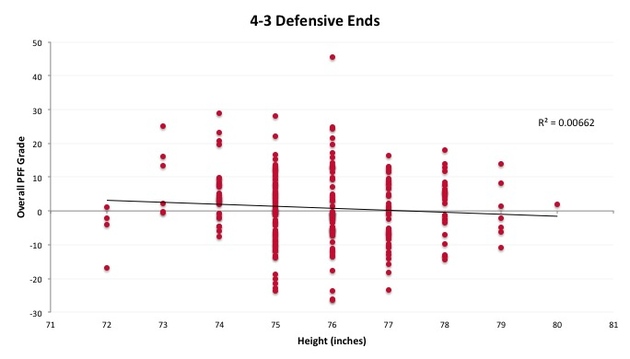 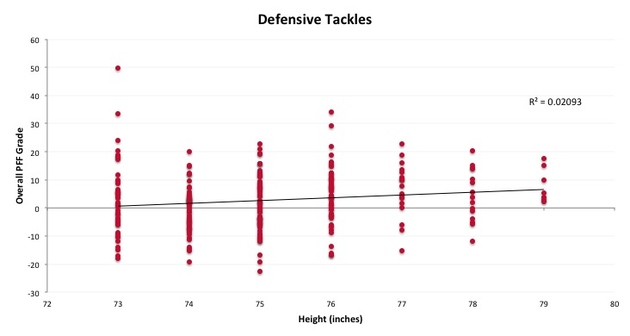 Of the above, 3-4 Defensive Ends show the largest correlation with an r-squared at .08. This is still considered a weak relationship. Should we factor in height as a variable? Sure. Does it mean people overstate the importance? Most likely. I truly think it should be used more as a differentiator than identifier.

In case you're curious, I also ran the same analysis using run defense and pass rushing, but got similar results across the board. I'll spare you the red dots...

More concretely, I want to show a couple individual players that fit in that 3-4 Defensive End role. We have a shortage of case studies around his height, but look at Buffalo's Kyle Williams (6'1", 303 lbs.) and Sheldon Richardson (6'2.5", 294 lbs.). While both have a little weight on Donald, there's not doubt he can pack on a few pounds. I'll also include Geno Atkins at Defensive Tackle (6'1", 303 lbs., Combine at 293 lbs.) since we hear the comparison so often. Combine Results (unless otherwise denoted by a '*', which represents Pro Day numbers):

So while more precedence exists for taller players, it's not unfounded to see smaller guys dominate. Donald's film speaks volumes. His athletic numbers back up his potential ceiling. On the surface, Aaron Donald may not be the best fit in Atlanta. His versatility and track record make me hesitant to dismiss him as one of our draft prospects in a trade-back scenario. I just hope we don't allow height to predict his success - and neither does he.