The Falcoholic's Murf Baldwin examines Florida State defensive back Lamarcus Joyner's fit in the Falcons defense. Joyner's physicality, coverage ability and range possibly makes him the best fit out of all the draft-eligible DBs.

Share All sharing options for: FSU DB Lamarcus Joyner is a scheme-specific fit in the Falcons Defense

After last season's 4-12 debacle, the Atlanta Falcons need to think hard about only acquiring pieces that are exact fits in their new 3-4-based, multi-faceted scheme. That scheme is now approaching unicorn-like status. Free agency has revealed, for the most part, that notion is exactly the case in regard to the defensive line, but the void at the free safety position needs to be filled with the same philosophy in mind.

Former starter Thomas DeCoud was an obvious misfit as the scheme evolved from a zone/area defense to an aggressive outfit with multiple roles for its interchangeable safeties.

When DeCoud's role went from needing to be in the right spot at the right time, to covering receivers and tight ends, blitzing and being required to assist heavily in the run game, the results were damning in relation to his skill set.

Florida State's Lamarcus Joyner, 5'8", 184 pounds, is not the ideal safety from a height-weight standpoint, but his ability to diagnose, cover and hit makes him the perfect player to operate in DeCoud's stead in the Falcons' secondary.

Additionally, corners have to be adept in zone, press- or off-man coverage.

Safeties may have the toughest role of all the personnel. Attempting to distinguish the positions by name may be a formality simply for novices to follow along, because the positions operate with game-specific roles and tendencies.
"It doesn't matter what you call us," Falcons' safety William Moore told me in a recent conversation. "We play linebacker, corner, man [coverage], and zone and are asked to blitz. That's why I'm making sure my [back] pedal and man skills are top-notch. We're that interchangeable."

Moore is listed as a strong safety, but the film illustrates that he played a ton of free safety in the 2013-14 season. Having safeties with interchangeable skill sets is the way the league is shaping up these days.

As schemes are becoming more pass-oriented (and multiple) on offense, safeties will be asked to fill more and more roles. At the collegiate level there hasn't been a defensive back that has been asked to perform more duties than Joyner.

Most are under the impression that Joyner is a natural corner, as he played the position his senior season under DC Jeremy Pruitt for the National Champion Seminoles.

But most of his career was spent at the free safety position.

By playing Joyner at the nickel corner position, Pruitt was able to take advantage of his superb blitzing skills by having him closer to the line of scrimmage. The results were stellar, as Joyner racked up 5.5 sacks to go along with 69 tackles, two interceptions and three forced fumbles. 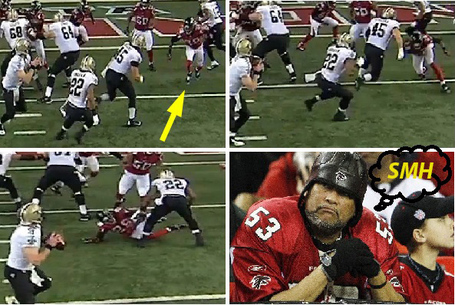 As you can see here, DeCoud's lack of physicality makes him a liability in the manufactured blitz game—much to the chagrin of this Falcons fan. He blitzes with his head down bracing for "nonexistent" contact with the fullback. He then proceeds to fall down after brushing up against his forearm.

Contrast that with Joyner's style of play and you can plainly see the difference.

Here we see Joyner blitzing off the edge taking on multiple blockers and defeating them. Joyner relishes contact and prides himself in the physical aspect of the game, which is a necessity in Nolan's scheme.

In certain sets the free safety is left alone on an island to cover and routinely has to play an inside corner position. There's not a safety in the draft that would play that role better than the diminutive Joyner. 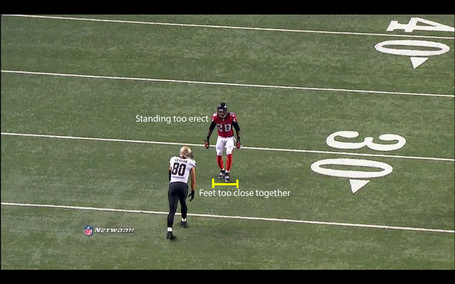 Here is a situation supporters of the Red and Black will undoubtedly be glad to never see again—DeCoud, on an island, against the best tight end in the NFL in Jimmy Graham (New Orleans Saints). DeCoud excelled in zone coverage but was extremely inept in man.

Joyner, on the other hand, is smooth in and out of his pedal, can play with his back to the ball in man coverage or with his eyes on the quarterback in area principles. He also possesses really good hands with the ability to high-point the ball despite his shorter stature.

These traits alone should have the Falcons' brass salivating at the thought of adding him to the roster.

It used to be that defenses possessed a physical in-the-box strong safety to go along with a finesse counterpart. These days some free safeties are just as physical as strong safeties and can be used in the box. Free safeties like Earl Thomas (Seattle Seahawks), Dashon Goldson (Tampa Bay Buccaneers), Tyrann Mathieu (Arizona Cardinals) and Matt Elam (Baltimore Ravens) have brought such physicality to the position that there's been a paradigm shift in what personnel executives are beginning to look for in prospects.

The combination Goldson and strong safety Donte Whitner struck fear in the hearts of pass-catchers throughout the league when the pair both resided in San Francisco. It was widely known that if you caught the ball, more times than not, you would have your soul separated from your carcass.

If you've ever taken a hit like the one in the GIF above, it usually puts a tinge of doubt in your mind as to how hard you should run those vertical routes.

Joyner's center-field ability would allow Moore to work closer to the line of scrimmage thus far putting his stamp on the run game. But make no mistake about it the Falcons could take turns letting each player roam the box.

I echo Moore's sentiments if he's teamed up with a talent like Joyner. Both have the range to be the deep safety in a Cover 1, and both have the man-to-man skills to guard tight ends underneath. 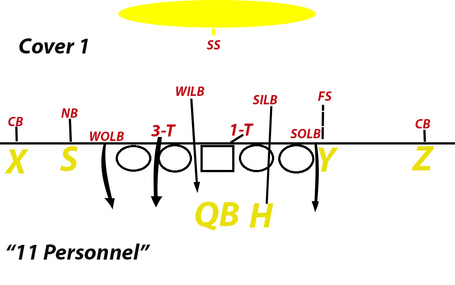 Here we see what Cover 1 could look like for the Falcons. Moore has the range to play the "Deep Middle" with Joyner using his man skills against the tight end. Everyone else will be in man coverage with the weak-side inside linebacker likely being a free rusher.

Having the ability to lean on this, or a derivative of it (Cover 3), is exactly what Seattle affords itself with its dynamic safety duo.

Seattle has two of the surest tacklers on the back end—when you factor in strong safety Kam Chancellor—and that's exactly what the Falcons would have.

Now how's that for intimidation?

For the Falcons' defense to reach a competitive level it will need to shed the "finesse" label—which is a fancy derivative of the word "soft." Giving up 4.8 yards per carry, as the Falcons did in 2013-14, is not to be glossed over. And if you're out there thinking that new additions Paul Soliai and Tyson Jackson will automatically solve those problems, I have a bridge I'd like to sell you that's located in New York.

Both played on defenses that were immensely more talented than the Falcons', yet their teams gave up 4.1 and 4.5 on the ground as well.

Things that make you go hmm...

It will be players on the second and third level that will help shed that nasty label. Adding a player of Joyner's ilk would be a major step in the right direction.

Murf Baldwin brings his unique perspective back to SB Nation at The Falcoholic after covering the Atlanta Falcons and New Orleans Saints for Bleacher Report. Accept no imitations; follow Murf on Twitter.