Georgia Tech's Jeremiah Attaochu should be garnering the type of attention that Buffalo's Khalil Mack is receiving. His targeting by the Atlanta Falcons would open up a world of possibilities in regard to the draft.

I can't lie, as a journalist I absolutely despise draft time. There's nothing worse than hearing fans and "draftniks" pretend to be in the know on prospects they probably never even heard of as little as three months ago—but feel the need to speak about with an aggressive tone and fervor usually reserved for things like presidential debates.

We've all seen the type.

These people usually speak in absolutes as if their opinions are actually factually based statements when draft evaluating is a major crapshoot at best. Once ESPN, or The NFL Network, cosigns a player's future NFL plight, the masses usually fall in line in a sheep-like nature to fit in.

This draft season is no different.

University of Buffalo edge-player Khalil Mack is the darling on the defensive side of the ball. Despite mostly playing against players who will more than likely be selling insurance after their college career comes to a halt, Mack has been billed as being head and shoulders above players with similar skill sets, and production, against much stauncher competition.

Don't get me wrong, Mack looks to be an absolute beast.

While supporters may point out that one of Mack's best games was against Ohio State in a blowout loss, not having to navigate a schedule of elite competition-on a weekly basis-can only be of benefit in comparison to the other aforementioned prospects, and shouldn't be overlooked.

This why I believe Georgia Tech's Jeremiah Attaochu has the talent to be every bit as good as Mack and could be a better value for a team with a myriad of holes like the Atlanta Falcons.

Falcons defensive coordinator Mike Nolan is finally getting the ball rolling by committing, personnel-wise, to an odd-front alignment-at least on base downs. They have gone out and acquired one-dimensional free agents Paul Soliai and Tyson Jackson to help assist in the run game. These role players are mostly effective when accompanied by explosive talent on the edges.

While Atlanta has decent—also a code word for average—candidates to man the edges, most notably veterans Osi Umenyiora and Kroy Biermann, there's not one candidate on the roster who's an explosive athlete with the prerequisite talent the Falcons need. The ideal player would be able to drop in zone coverage, set the edge in the run game, shoot gaps in the manufactured pressure packages and disrupt ball-carriers and quarterbacks alike in the backfield.

Those duties should come with a picture of Attaochu on the cover of the playbook as he's performed them ad nauseum for the Yellow Jackets over the past four seasons. At 6'3", 252 pounds, Attaochu has the look and feel of a young Von Miller (Denver Broncos)-which is kind of odd to type as Miller only turns 25 on Mar. 26.

The 21-year-old Attaochu, whose birthday was in January, is an athletic monstrosity that has starred in a 3-4-based scheme, and has even dominated as a 4-3 hand-in-the-dirt end.

The ability to be equally effective in a two- or three-point stance is paramount in the Falcons' multiplicative look defense. 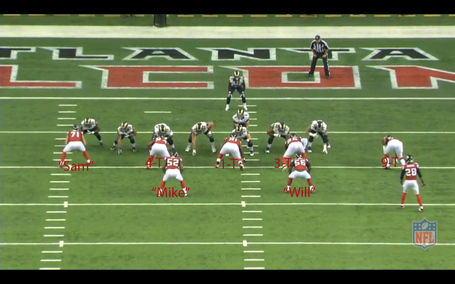 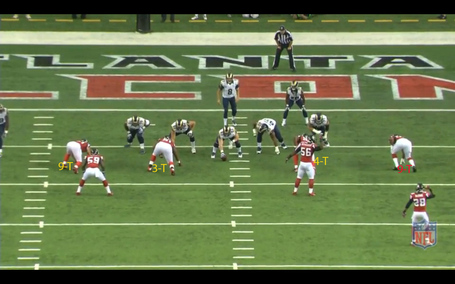 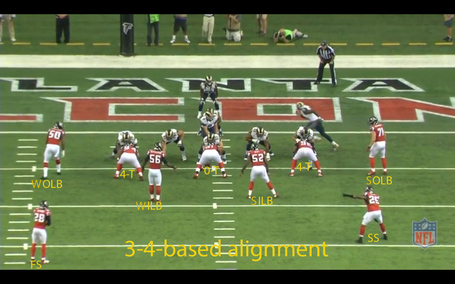 As you can see the Falcons have more looks than Madonna in her prime! And with the addition of the aforementioned role players you can further expect the hodgepodge of personnel to be used in a variety of ways—which would be something Attaochu is used to.

Here we see Attaochu coming off the edge as a weak-side outside linebacker in a 3-4 alignment. This is the money position as it requires an explosive player that can flat get after the QB. By playing Attaochu away from the tight end, Atlanta could cut down on his chances of having to drop into coverage.

Currently Umenyiora is slated to man this position which makes me laugh uncontrollably thinking about an old, stiff, un-athletic lineman being counted on to generate the bulk of the production. Umenyiora's led the team with 7.5 sacks last season, but with four coming against rookies Geno Smith and Mike Glennon it's safe to say he was not to clutch, highly-productive edge-player Falcons fans were used to seeing from former star John Abraham.

Attaochu is twice as explosive as Umenyiora and has the ability to transfer speed to power as we see in the above GIF—where he walks the right tackle back into the lap of the QB with one hand!

But ultimately there's not a spot Attaochu wouldn't shine at on the edge. He has one of the quickest first steps I've ever witnessed which would make him a terror in the Wide-9 alignment. He's built as if he's chiseled out of granite and is stout enough to hold the edge and funnel run plays back to the inside. He can also play an off-the-ball linebacker role in a 4-3 scheme or on the inside of a 3-4 scheme.

His pursuit is like the football version of a heat-seeking missile and he can shoot gaps with the best of them. His 43.5-sack career was accompanied by 196 tackles. The guy is just a pure football player.

He also has a Honda Civic-like motor that's capable of going all game long. It's rare that you get a player with a vast repertoire of skills that has the motor to tie it all together, but that's exactly what you get with Attaochu. 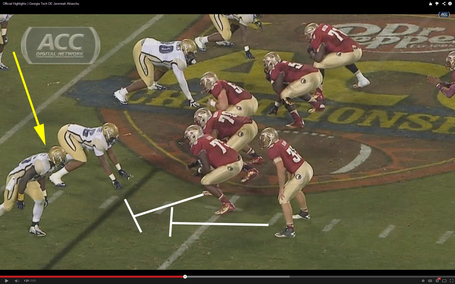 Here we see Attaochu receiving extra attention against the National Champion Florida State Seminoles. He has to get through the H-back and left tackle on his way to the QB. 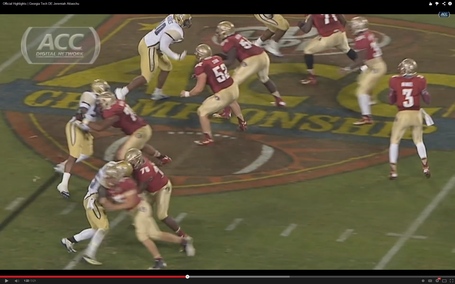 He gets stonewalled as expected. 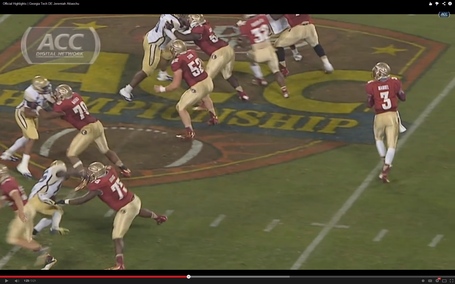 He even loses his balance. 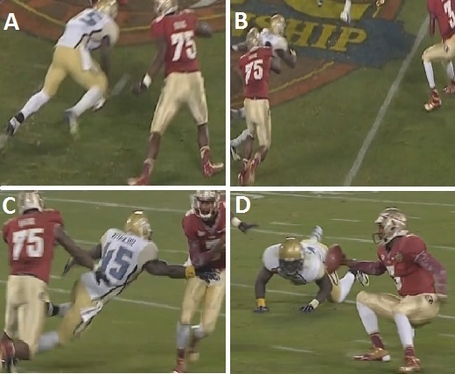 But he still has the wherewithal to pursue the play and even gets enough of hand on the QB, E.J. Manuel (6'4", 240 lbs), to force a sack. Attaochu is a scary prospect who would have the attention of opposing coordinators which is something that can't currently be said about anyone currently in the front seven.

If you're evaluating with impartiality, the Falcons have needs at edge-rusher, free safety, nickel corner, tackle, running back and fullback. Holding the sixth pick in the forthcoming draft, many believe the Falcons could do everything from moving up to select Clowney or staying put to target Mack.

If the Falcons really want to ensure they come away with the type of talent that could potentially sustain future success, they should find a partner to trade back with. If they were able to trade back in the middle of the first round they could come up with possibly an extra pick in the second round—in this extremely deep draft. This means they could target a safety with the first pick like Alabama's Ha'Sean Clinton-Dix, or Louisville's Calvin Pryor, and then turn around and target Attaochu in the second round.

If Atlanta wanted to stay put, drafting a potential franchise tackle like Greg Robinson (Auburn) would seem feasible when you take into account that Attaochu is every bit the player that Mack is. Attaochu's situation is very reminiscent of former Tech standout Demaryius Thomas' who was injured prior to the combine and was almost a forgotten man because of it.

Thomas ended up being the 22nd pick when it was clear had the makeup of a top-10 selection, at least. Attaochu incurred a hamstring injury prior to the NFL Scouting Combine and has further drifted off the map of draft relevancy—even in the state of Georgia where he racked up four sacks against the heated rival Georgia Bulldogs this past season.

His pro day is on Mar. 28 where he is expected to test off the charts, if healthy, and officially put his hat in the ring for draft pundits and skeptics.

So if Atlanta is looking for an explosive edge-player that can run, hit, cover and is a scheme-specific fit it should look no further than a prospect who did all of those things right up the street on North Avenue. Attaochu didn't generate the type of publicity Mack did—as everyone wants to find the next small-school wonder—but he was equally as productive against the level of competition that he will see in the professional ranks.

Don't mess this one up, Atlanta...

Murf Baldwin brings his unique perspective back to SB Nation at The Falcoholic after covering the Atlanta Falcons and New Orleans Saints for Bleacher Report. Accept no imitations; follow Murf on Twitter.