O Pass Protection, Where Art Thou?

We saw our pass rush ranked dead-last in the previous article. How does the offensive line fair using the same analysis?

Share All sharing options for: O Pass Protection, Where Art Thou?

Let me start by saying that I'm happy Matt Ryan is still alive after last season. I'd be surprised if he bought any gifts for his lineman to say "Thank you", unless it was a shake-weight...

Hopefully you've browsed over the pass rush grading post from a few days ago, as this grading methodology will match the defensive side. In short, I looked at how each offense performed against opponents in terms of pressure allowed. I then compared that performance to the opponent's average pressure in the other 15 games. For example, in Week 1 against New Orleans, Matt Ryan had 42 drop backs, getting sacked three times and pressured on 19 others. That's 52.4%. New Orleans only averaged 35.6% the rest of the season. That means we allowed pressure on 16.8% more snaps. 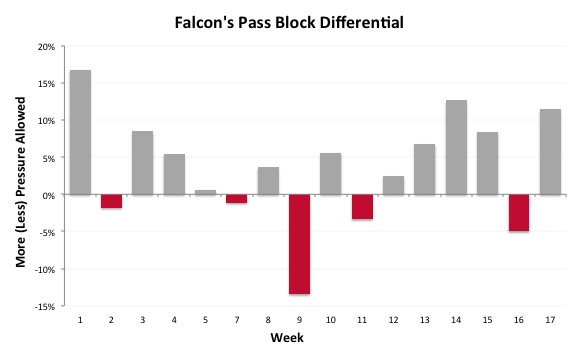 Of our 16 games, we performed better than average in five: Week 2 against St. Louis, Week 7 against Tampa Bay, Week 9 against Carolina, Week 11 against Tampa Bay, and Week 16 against San Francisco. We came close to average in two other games (Weeks 5 and 12 against New York and New Orleans). The first game against New Orleans was the worst by far. After making adjustments following that game, the offensive line looks average before the starter rotation began.

Konz's last game at center was week 10; Reynold's started rotating the same week, eventually losing significant snaps after week 12. The average differential from weeks 2 to 10 is 0.9%, and weeks 11 through 17 average 4.8%. Don't get me wrong - I'm not trying to say that Konz and Reynolds played well. They obviously had the wrong performance trajectory. I think, however, we can expect some regression when cycling through that many starters. Needless to say, it exacerbated the blocking issues.

I added some additional information by using the pass-rush rankings from the previous analysis. I calculated a Strength of Schedule (SoS Rank) from 1 - 32 (hardest to easiest) by averaging the opponent pass-rush rankings. Here's how everything looks:

Atlanta ended the season ranked 26th, allowing pressure on 3.6% more snaps than opponents achieve on average.. Four teams had fewer positive games, and four others matched the Falcons' five positive performances. With an opponent pass-rush SoS at 13.1, they tied the Patriots with the hardest schedule in the NFL. I also mentioned in the other article that PFF adjusts pressure to put more weight on sacks. Using their method for comparisons sake, Atlanta would rank 25th with only 2.3% more pressure on average.

26th may not seem great, but at least we gain a little perspective. I may argue about the Seahawks' and Jets' rankings because of their QBs, though both lines struggled plenty. Regardless, if Atlanta had continued their performance from weeks 2 through 10, they would have landed near the middle (19th). I think this paints a relatively positive picture. The Falcons have a lot of work to do, for sure. This year at least provided a difficult test for a batch of new players, which I think will motivate some intense competition for a role next year.