A look back at all the performances on the final day of combine drills.

The NFL Combine has drawn to a close, and we're one step closer to this year's draft.

If you're up to date on the most **shocking news of the day, then you'll know that the Falcons should be in the market for a free safety in the coming months. That's good timing for today's set of workouts, in which the incoming class of defensive backs took center stage at Lucas Oil Stadium. Ready, set, go!

**By shocking, I actually meant more obvious than the silvery-white sheen of Mike Smith's hair in a crowd of tanned brunette models. 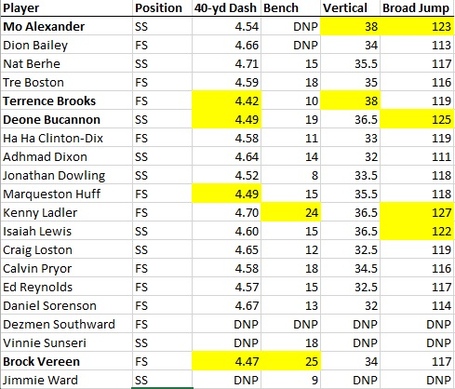 It's an interesting class of safeties, though certainly not a very deep one. If the Falcons want to acquire an instant impact player at free safety through the draft, then that essentially limits their options to Ha Ha Clinton-Dix, Calvin Pryor and maybe Ed Reynolds. And, clearly, the teams has bigger needs than safety that it should address in the first round.

So let's assume (dangerously) that Atlanta picks up a safety in free agency. That still doesn't rule out the team taking another somewhere in this draft considering the team's only backups are second-year players Kemal Ishmael (meh) and Zeke Motta (ugh).

One of the guys that stood out among the safeties was Florida State product Terrence Brooks, who interestingly enough compares to current Atlanta target Louis Delmas. Brooks is a former cornerback that moved to safety before his junior season, but he also spent time lining up near scrimmage and played an important role defending from the box.

And before you ask, yes he had some issues with missed tackles. But that's an issues plenty of prospects deal with, and the most important trait Brooks displays on tape is his ability to instinctively diagnose a play and find the ball. That's what sets guys like Ed Reed apart from the rest (don't quote me as comparing Brooks to Reed, though). If he's still around in the 3rd or 4th round, perhaps the Falcons consider him.

A more likely option and another interesting prospect that had a good combine showing would be former Minnesota Golden Gopher Brock Vereen, younger brother of Patriots running back Shane Vereen. He's more of a late-round option because he doesn't possess the prototypical size, but he's fluid on the field and most importantly takes good angles to the ball carrier. I like him as a low-risk project option to compete with Ishmael and Motta. 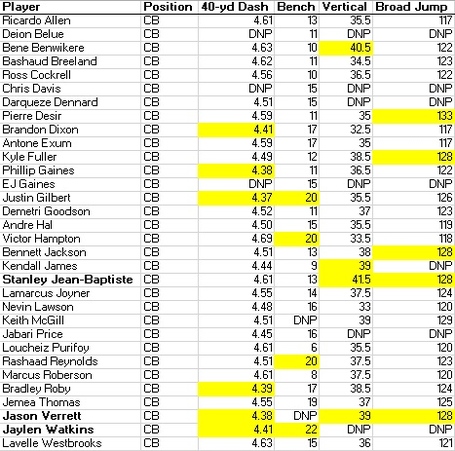 Now we get to a position the Falcons, in all likelihood, will not draft, or if they do it will come late. Even with Asante Samuel gone, the team looks to return its top three corners in Trufant, Alford and McClain. Even so, there were a few notable performances.

Jaylen Watkins had himself a nice day in the drills he did perform, which does not surprise me in the least. He's physical, has the type of skill set to defend the slot and (oh yeah) he's Sammy Watkins' brother. So good genes and all that. He might be late second-day option.

Rashaad Reynolds, an Oregon State product, could be a late-round option that interests the Falcons more than somebody like Watkins. Some have knocked Reynolds' athleticism and his strength, so this combine performance at the very least tells us that he's willing to work to improve his perceived flaws. And hey, 20 reps on the bench isn't bad for somebody that weighs in at 189 pounds.

The most important thing about Reynolds is that he's a heady, smart player, which the Falcons certainly seem to like in their defensive backs. Maybe he's the type of depth pick they'll want.

How do you all think the Falcons address the secondary on draft day? Anyone that stood out to you I didn't mention? Have at it.