This post will contain strong feelings about certain prospects. Do not look directly at this article without sunglasses.

Three days down, and finally we're getting some real Combine drama. Naturally, it's swirling around Jadeveon Clowney.

Many came to bury Clowney despite some great measurements at the Combine, and it's not hard to figure out why. Many have mistrusted Clowney's work ethic, he didn't participate in all the drills today and NFL teams are absolutely attempting to ruin his stock so they have a shot at him. If you think that's cynical, you don't typically follow draft season, where hit pieces and anonymous scouting can ruin the public perception of a player, if not his draft value. He'll still be a top five pick in the upcoming draft and has a shot of going to the Falcons if they trade up. There were very few players who truly wrecked their stocks today.

That drama briefly overshadowed other big performances by players the Falcons could be quite interested in. Defensive end, defensive tackle and linebacker form the Combine grouping where the Falcons arguably will need the most help in the 2014 NFL Draft, so it's imperative they sort through and find the best fits for the team. We all disagree vehemently about who those players might be, but it's clear they exist in this class.

Please note that if guys were unable to work out at the Combine, I removed them from this list entirely, which is why you won't see some familiar names listed here. A listed "0" under any category means they did not perform the drill or the results were not given out by the time this article went live.

Also note that some of these guys were listed at a particular position coming into the Combine, and I'm not sure why. Nix is not a DE, but whatever, we'll roll with it. Onward! 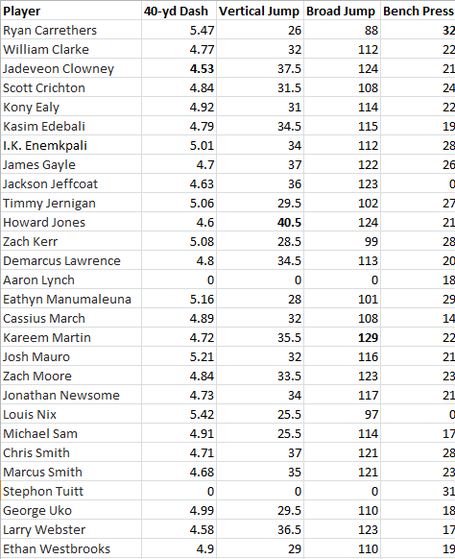 Unsurprisingly, Clowney had the best 40 time out of any end and ranked highly in every other measurement except bench press. Michael Sam had a lackluster Combine, which will likely fuel doubts about his draft prospects going forward. Kony Ealy is a popular first round pick around the Interwebs, and he turned in a solid if unspectacular Combine in general. His three cone time—sorry to not list those, but I was running out of time and patience—was one of the best of the Combine. He'll be a useful player for someone this fall.

Howard Jones will be a more familiar name after today. The Shepherd product finished with a Top 5 40 time, Top 5 broad jump and top vertical jump, showcasing tremendous athleticism in the process. He's not going to go early, but some team is going to take a chance on the guy and hope he's not a workout warrior. Ditto Jackson Jeffcoat and Larry Webster, who put on shows for the many assembled scouts. 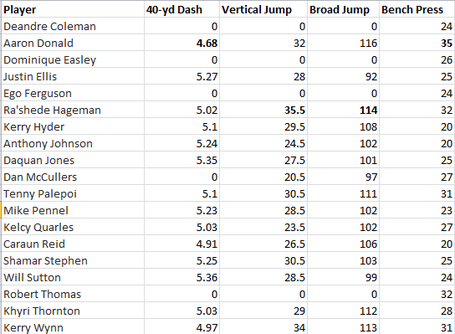 There are some lumbering dudes here. Louis Nix profiles as a classic 3-4 nose tackle, and he showcased the kind of non-athleticism you expect from the Grady Jacksons of the world. It won't hurt his draft stock.

Aaron Donald blew the doors off the place, running the fastest 40 of any defensive tackle and showcasing plus athleticism. It's not out of the question that he goes in the mid-first round. Falcoholic favorites Ra'Shede Hageman and Caraun Reid didn't embarrass themselves, though Reid's low bench press total will probably make many question his strength despite the weak correlation between bench totals and functional NFL strength.

The only guy who appears to have damaged his stock is Will Sutton, who didn't do much here and likely will be a Day Three selection going forward, if he wasn't already. 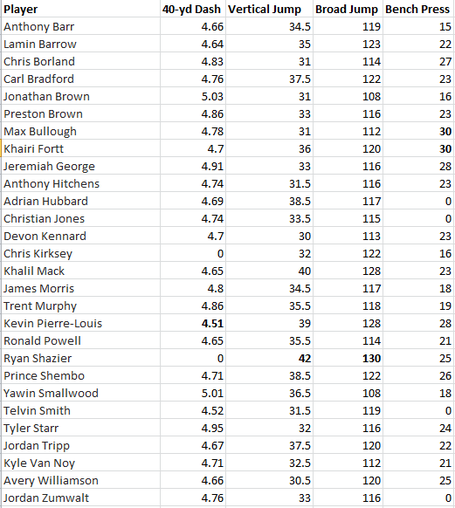 The story here for many will be Anthony Barr's 15 bench press reps, but Barr's game isn't built around strength. He ran a very solid 4.66 40 and showed above average athleticism, but he may have needed to blow the doors off the Combine to go ahead of some of the other guys who worked out today.

Khalil Mack did everything expected of him, putting up a decent bench press total and flashing quality athleticism. He should be a top ten pick, and does seem to be a natural fit for the Falcons' defensive front, should they choose to go that route.

Ryan Shazier flashed some truly freaky athleticism, but didn't run the 40 yard dash. Carl Bradford, Jordan Zumwalt and Kyle Van Noy had been hyped coming into the Combine and did nothing to hurt themselves. If the Falcons want to look later and find talent, they'll probably want to keep eyes on Jordan Tripp, Lamin Barrows and Tyler Starr, who put up solid numbers at the Combine and project to be late Day 2 or Day 3 selections. Pretty solid group of workouts all the way around, but obviously our eyes are on Mack and Barr.

Your reactions to these Combine performances?