Day two is in the books and we're rolling right along in this year's NFL Combine.

Sunday was the day for flash and finesse, with quarterbacks and offensive skill position players taking center stage at Indianapolis. None of those especially stand out as roster weaknesses as far as the Atlanta Falcons are concerned, though it wouldn't surprise many if the team does try to land a running back or wide receiver in the later rounds.

Fact: Johnny Manziel reminds people of a young Brett Favre. SEND HIM TO THE PEACH STATE!

In all seriousness, I doubt the Falcons draft a quarterback. But I still went ahead and included some of the prospects projected to go in the later rounds or wind up as college free agents. Of those, it was naturally the more mobile quarterbacks - Connor Shaw and Logan Thomas specifically - that stood out as overall athletes.

Shaw is interesting in that he was a consistent performer in the SEC that made few mistakes and generally put his team in a position to win. The Gamecocks didn't put the game on his shoulders all that often, with power running taking precedence over passing, but you're not necessarily looking for a world-beater in a backup NFL quarterback, either. You want consistent and turnover-averse, and if he falls far enough (i.e. seventh round or undrafted) maybe Atlanta gives him a look - even if the team rarely signs "mobile" passers.

Then again, with Dominique Davis and Sean Renfree returning, there's not much of a need. 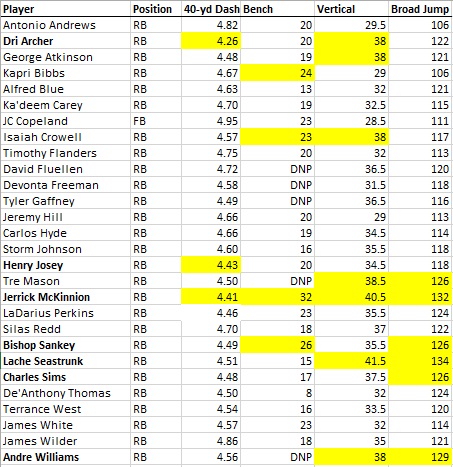 That Dri Archer guy is fast, huh? Say what you want about the MAC, but it produces some talented players.

Archer is short but compact and quite shifty (and clearly with better straight-line speed than Jacquizz Rodgers). He was also the MAC Special Teams Player of the Year in 2012, starring as a return man for Kent State. So if the Falcons want to upgrade the return game, he's certainly someone to keep an eye on.

Of course, the late-round guy that impressed me the most leading up to the combine was Jerrick McKinnion out of Georgia Southern, and he certainly had himself a day. He's downright explosive and lined up everywhere from quarterback to defensive back during college. At this rate, not many teams may be sleeping on him come draft day. 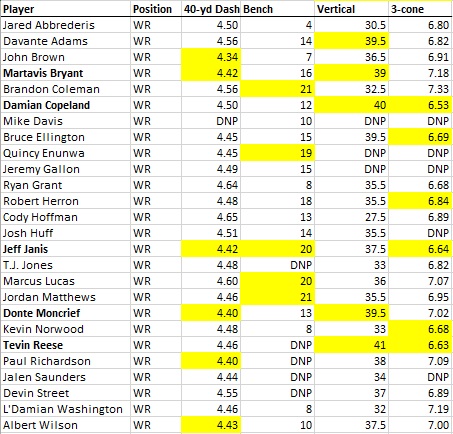 No, the Falcons are not drafting Sammy Watkins. They could, however, look at a mid to late-round receiver to develop for later (and those were the players I focused on).

Jeff Janis might be that guy. Coming out of D-II Saginaw Valley State, the 6-foot-3, 219-pound wideout had a monster day at the Combine. He's sort of built in the mold of a Jordy Nelson - a perimeter, possession type of guy - and he had an incredibly productive college career (eight 100-yard receiving games as a senior, including a 331-yard day).

But enough of my thoughts. How did day two of the NFL Combine shake out in your eyes? Who interested you?