Let's all talk about fat men trying to sprint for 40 yards!

Share All sharing options for: 2014 NFL Scouting Combine: A Day One Recap

This year's NFL Combine is now underway, once again hosted at Lucas Oil Stadium in the heart of scenic Indianapolis. You see that? It's Bill Polian, staring off into the distance, wondering where it all went wrong.

But you're probably more concerned about the results. The first day of workouts featured offensive linemen, tight ends and specialists. Obviously, the former two constitute a couple of the Falcons' biggest needs this offseason.

Before we get started, I'd like to reiterate something Dave already pointed out: fundamentally, these results will not make or break the case for drafting a player. They don't override two-plus seasons of tape, either. They do help us form a more complete picture. Bear that in mind.

So without further ado, let's dive in (I hope you like numbers). 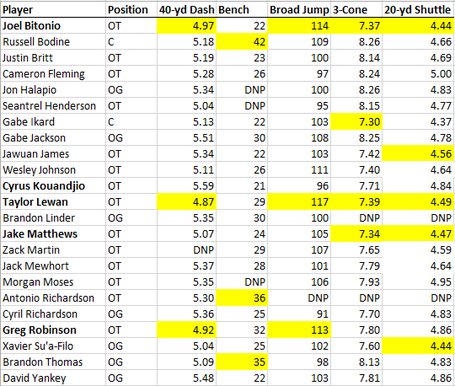 In case you couldn't figure it out, I highlighted the better performances in each category and singled out a few of the players I thought had pretty good performances overall. And if you wondered why I highlighted Cyrus Kouandjio, it's because he reportedly failed several of the physicals various NFL teams had administered.

Knee problems = no bueno. Don't expect the Falcons to go anywhere near him.

Outside of that unfortunate bit of news, the offensive tackles had several top performers, once again bringing our attention to the fact that this is a very deep class of edge blockers. The most important measurable for the big heavies up front (excluding height, weight, wingspan) naturally has to be bench reps. Usually this drill is easier for interior linemen because they have shorter arms, which makes Antonio Richardson's 36 very impressive. Clemson guard Brandon Thomas also clearly has some superhuman strength on him.

But the basic drills don't tell us all that much when you're evaluating offensive linemen. The 40 times, as funny as they are to watch, are basically meaningless outside of showing us "hey, this guy is athletic for his size." The most important drills are the position-specific ones: kickslide, mirror and combo blocking (don't know what these are? Check out this post). Spoiler: no numbers there.

Regardless, it is interesting to note that three of the best performers in the measurable drills (Robinson, Matthews, Lewan) are considered the three best offensive tackle prospects in the class. Bitonio makes an interesting case as a sleeper pick, as well, with most projecting he'll be drafted between rounds two and four. 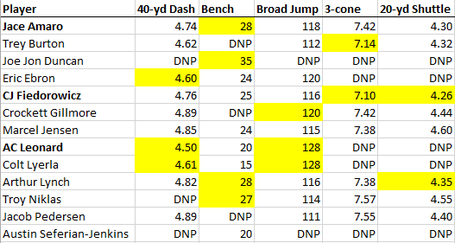 Here's where the measurables are more important. The 40 times, the 3-cone, broad jump and bench are all of interest.

One of the more impressive performers in my mind was Fiedorowicz, the Iowa product. He's got a nice overall blend of size, speed and strength going for him, and that balance could make him a Falcons target. He was already considered one of the best blockers in this class, but his short-range agility (7.10 in the 3-cone) and decent straight-line speed also makes him an appealing prospect as a receiving threat.

Small-school product A.C. Leonard was another surprise. His blocking abilities are marginal and he clearly projects as that F-type, hybrid tight end the Falcons never seem to draft. But the speed and explosiveness are blazing. Many had him as an undrafted free agent, but the one-time Florida signee may start garnering interest as a late-round sleeper.

One more thing: I was disappointed that Seferian-Jenkins was not medically cleared to participate in any of the running drills. He was one of the guys I had wanted to see, so hopefully he'll be ready to go by the time his pro day rolls around.

The kickers and punters di- ahaha. If you think the Falcons are actively looking to replace Matt Bryant or Matt Bosher, well, I'd imagine you'll be disappointed when the season starts. I'd doubt the kicking game is of any concern to the team this offseason, so we'll gloss over this bit. I guarantee Bosher can already tackle better than any of them.

With that, I'll turn this discussion over to you, dear readers. What were your impressions of today's combine workouts? Who you do like among the O-linemen and tight ends?