Where should Falcons fan allegiances lie?

Your Falcons are not playing in the Superbowl. Instead, the Broncos and the Seahawks, neither of whom are division rivals or particularly hate-worthy, will duke it out in East Rutherford tonight for the Lombardi Trophy.

Perhaps you are torn. Some of you, I know, are not. You have your prejudices. You hate Peyton Manning, or Richard Sherman, or the state of Colorado, or the phrase "12th man," and that's fine. But for those of us that find ourselves on the fence, here are a few things to consider heading into "The Big Game:"

The Seahawks have not won a Superbowl.

Unless you are a "suffer with us" sort of person, it's easier to root for the Seahawks because their only Superbowl appearance to date (the 2005 season) was a loss to the Steelers. And like Atlanta, Seattle is a team that has endured long spells of mediocrity and/or irrelevance. The Broncos, meanwhile, already have to Lombardis under their belt.

This is actually the first football game I can recall with any sort of clarity. The Falcons lost 34-19 in John Elway's final game as an NFL quarterback, who essentially put the game away for the Broncos. As you know, he is now Denver's VP of football operations. So if anything, root against that guy.

Like the falcon, a seahawk is an elegant but deadly bird of prey. A bronco is big, dumb and also OJ Simpson's favorite car.

Rob Ford is a Broncos fan 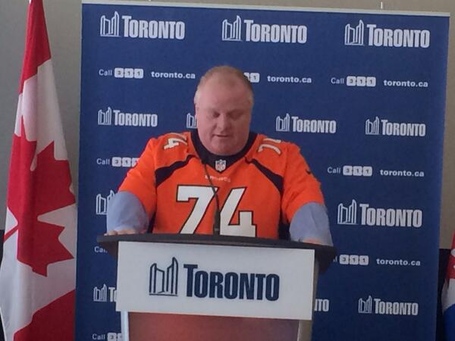 Hey Rob, football is an American sport. Go back to Canadia-land.

Stop taking over my TV with your Easter Island head!!

For this alone, I'm not sure how you can't root for the Seahawks.

Well then. It looks like you should be rooting for the Seahawks. Enjoy the Superbowl, and may it be blessed with unhealthy foods and alcoholic beverages.