O Pass Rush, Where Art Thou?

Just how bad is our pass rush? Take a look into the pool of despair.

Share All sharing options for: O Pass Rush, Where Art Thou?

Just a little pass rush…is that too much to ask for? This seems like a question we ask all too often. Especially with a young, promising secondary, the defensive front has become an even more important problem to solve. No matter how good Trufant is or Alford will be, we simply cannot expect them to cover adequately for 5 seconds.

To analyze the pass rush, I looked at all NFL teams and match-ups. I took the sum of sacks and plays-under-pressure, then divided by total drop backs to get a percentage. I then compared that percentage to the opposing team's average in the other 15 games that season. For example, let’s look at Atlanta’s Week 1 performance against New Orleans. Of the 38 drop backs for Drew Brees, The Falcons sacked him twice in addition to the 8 other plays under pressure. That’s only 26% of plays. How much pressure did New Orleans face in the other 15 games on average? 30%. In essence, we fell short by 4%. 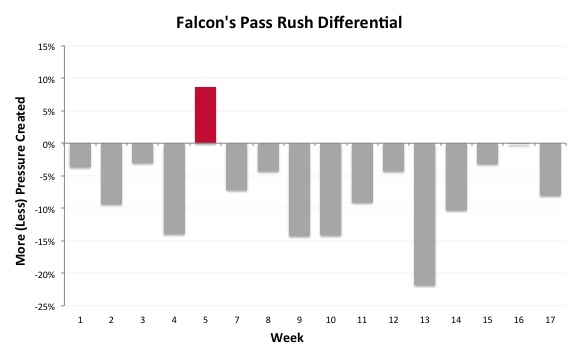 Out of our 16 game season, we only achieved better pass rushing statistics against the Jets. We had 5 weeks where we came relatively close to the average: Week 7 against Tampa Bay, Week 8 against Arizona, Week 11 against Tampa Bay, Week 15 against Washington, and Week 16 against San Francisco. The worst performance of the year came against Buffalo in Week 13, generating no sacks and only 4 hurries on 34 drop backs. Our secondary definitely won that game.

Anyway, when I average the difference by game, we can get a better understanding of where we rank. I also counted the number of games where each team generated more pressure (Positive Games). Here's how the NFL shakes out:

Also, When PFF calculates pass rushing productivity, they place more weight on sacks than other pressure, but that same formula didn’t make any difference on putting Atlanta dead last. On top of that, the Falcons seemed to be the most consistently bad team, with only 1 positive performance. The next closest team (Cleveland) had 4.

I’ll dig into the rushing defense in another post, but Atlanta did register the second-worst yards per carry and yards per game allowed (behind Chicago). I think we could make the argument that the defensive front is the worst in the NFL. Couple that with Dave’s article a few weeks back about having the second-worst PFF grade on the offensive line...it makes you wonder which area Dimitroff & Co. will prioritize, should a decision have to be made.