Somewhere north of $16 million, to be exact.

Share All sharing options for: The Atlanta Falcons Should Be Well Under The 2014 NFL Salary Cap

There are many moves to be made between now and August that will undoubtedly chew up most of the Atlanta Falcons' cap space. Right now, though, they look to be in great shape, with the potential to free up more money.

Scott Carasik at Bleacher Report put together a breakdown of cap space by position and for the overall Falcons' team, which is a highly recommended read, particularly for those of you who love cap minutiae. For the rest of the us, the relevant number is the team's estimated current cap space, which Carasik figures is a little north of $16.5 million. The Falcons can lock up their draft class and sign a couple of quality free agents for that money, at minimum.

Some of this space will be chewed up by re-signing players like Corey Peters and Robert McClain, if the Falcons choose to retain their own free agents. Still more can be freed up by cutting ties with the Asante Samuels of this time, veterans who make a fair amount of money but are no longer part of the Falcons' plans going forward. When the Falcons hit free agency, it's not outlandish to suggest that they could have $20 million in free money. Given the real holes on both lines, that's a blessing. 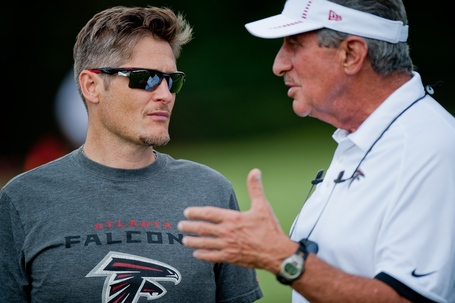 A couple of notes of caution here: We don't know what the 2014 NFL salary cap is going to be yet. The best reports have teams learning that the 2014 salary cap will be $126.3 million, roughly a 3% increase on 2013. Pro Football Talk has that number at $127.5, which would give the Falcons an extra million dollars to play with. We should know for certain by the time the league year opens up on March 11.

Again, read Carasik's article for a nice breakdown by position. There's room for some cuts here.

How do you expect the Falcons to use their 2014 cap space?