There were bright spots mixed in here and there, but the Atlanta Falcons struggled to keep up with the Cincinnati Bengals as they suffered a 34-10 loss in their first preseason game of 2013.

The first-team offense played three series in the first quarter, managing a short field goal on the initial drive and stalling on the next two. Matt Ryan was accurate as always, but a couple passes sailed and he felt pressure early on on.

Steven Jackson's premier in Atlanta was a bit unspectacular. He managed just eight yards on five carries and a single reception for no gain. Run blocking didn't do the veteran back any favors. Lamar Holmes struggled at times, as several other members of the front five. This is still a work in progress.

Dominique Davis finished 8-of-19 with a touchdown and an interception. He didn't get much helping in pass protection, and he forced a bad throw on the run that resulted in his lone pick. Hopefully we were simply witnessing early preseason jitters from the second-year quarterback.

Robert Alford made a few impressive plays, Jonathan Massaquoi recorded the only sacks for the Falcons and Paul Worrilow was an absolute machine with 11 tackles on the night. Worrillow, and undrafted free agent from Delaware, also defended a pass and had a tackle for loss. I think it's safe to name him the Defensive Player of the Game (still waiting for a sponsor for this award).

Brian Banks finished with one tackle, but with several linebackers stepping up in the preseason opener, it appears to be an uphill battle for the 28-year-old rookie. 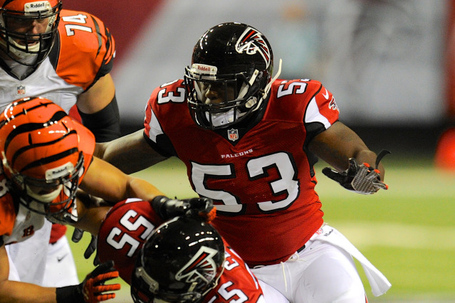 The Falcons struggled defending Josh Johnson. He broke away for a 43-yard run and finished 9-of-16 passing for 100 yards and a touchdown. The game got out of hand when the reserves started to take the field, which feels reminiscent of last year's preseason start.

Remember, Atlanta went 1-3 in the preseason before that stellar run in 2012. "It's just a preseason game." A common assertion, of course, but an accurate one. Let's hear what you thought of the Falcons start. Who stood out to you? Biggest concerns going forward?