The Stataholic: Where Do The Falcons Rank In Team Efficiency?

The first in a series of posts that will take an in-depth look at how the Falcons compare to the other NFL clubs on the more advanced spectrum of statistical measurement.

Share All sharing options for: The Stataholic: Where Do The Falcons Rank In Team Efficiency?

How do we quantify success in football?

For a lot of folks, that comes down to a simple measurement of wins and losses. It's the long-standing theory of "you are what your record says you are," and its popularity comes from its incredibly straightforward nature.

Then you have the "Embrace Debate" crew. This is usually best defined by clips of Skip Bayless and Stephen A. Smith mindlessly yelling at cameras, pretending like they actually care about the very important topics at hand on ESPN2. The people in this category are probably making slideshows that "objectively" power rank all 32 teams based on... something.

Finally, you have those who turn to statistics in an attempt to see past records and "the eye test." And though it may not seem like it, football metrics have evolved a great bit in just the past decade alone (and they're continuing to grow in popularity and use). You only have to take a trip over to Football Study Hall to see some of the potential this holds in evaluating player and team talent in the college game.

So how do we measure team efficiency as a whole in, as Mike Smith would lovingly say, all three phases of the game? A popular method is DVOA (Defense-adjusted Value Over Average), which takes every play in an NFL season and compares it to the league average in comparable situations.

Where did the Falcons stand in 2012? Well, we've got some fantastic data courtesy of Football Outsiders (note: a positive offensive and special teams DVOA implies above-average performance, and a negative defensive DVOA implies an above-average unit).

Sorted by total DVOA, the Falcons ranked 10th in the league last season when you look at a combined measurement of offense, defense and special teams. It is perhaps a little more pedestrian than fans would like to see. And - surprise - our old playoff foes in Seattle are number one overall.

Atlanta also ranked 12th offensively, 12th defensively and 16th on special teams which is, again, nothing that necessarily reflects the team's 13-3 record last season. With regards to Weighted DVOA, which takes the most recent (i.e. late season) games into account, the Falcons were 13th in the league. And variance, which shows how often a team's DVOA performances varied from week to week, had the Falcons at 17th in the NFL.

So what does it mean? Well, if we're only taking these numbers into account, they say that the Falcons were an above-average team that was only mildly consistent across the 16-game regular season. Unsurprisingly, it was this set of data specifically that detractors used to support claims that the Falcons were "overrated," or that they would most certainly fall to the Seahawks in the playoffs.

In the Falcons case, DVOA is not necessarily a good predictor of future performance. But it does help highlight the fact that, despite a great record, the team was far from spectacular on special teams (the "eye test" agrees with this) and that it had games that involved a heavy dose of under-performance (like the loss at Carolina, or the 5-INT bonanza against Arizona).

So in a sense, Atlanta outperformed itself, which is surely a credit to the coaching staff's preparation and how incredibly disciplined the players were throughout the season (fewest penalties in the NFL).

But we're not done yet. While DVOA may be one of the more well-known metrics in the public arena, it's not the only one. Advanced NFL Stats, which has done some great work in devising WPA (Win Probability Added), has a team efficiency measurement of its own: Generic Winning Probability (GWP).

GWP takes data from recent seasons, along with considering the team's efficiency on offense and defense, and from that derives a probability that the team would win a game against a hypothetical, perfectly "average" opponent at a neutral site.

In 2012, the Falcons ranked 7th in GWP at 0.57, implying that they have a 57% chance of beating our imaginary average NFL opponent. The Broncos lead the pack at 0.72, the Seahawks are third at 0.66, and shockingly the Panthers rank fourth: 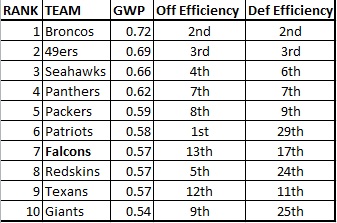 More interesting than those efficiency rankings, however, are the stats behind them. The Falcons had one of the lowest interception rates in the league at 2.3% (as in there is a 2.3% chance Matt Ryan throws a pick on any given play). They also had the second-lowest fumble rate at 0.5%.

And the offense's "run success rate" was, unsurprisingly, in the bottom quarter of the league at 36.8%. The eye test certainly confirms this much.

But what it does not tell you is that despite this, the Falcons offense on the whole had the second-highest offensive EPA (Expected Points Added) in the league behind New England. That means that on any given play, the Falcons would be second-most likely to score out of any NFL team. Explosiveness (read: Julio Jones) certainly plays into this.

Defensively, the team was more pedestrian, ranking 14th in the league (this includes playoffs). The team's success rate at defending the pass was 51.3% - also 14th - but Atlanta only successfully defended the run on 54.7% of all plays (sixth worst among all teams).

What does all this mean for the Falcons?

First, it's that every stat tells a different story. If you're looking at DVOA, the Falcons seem overrated. If you're looking at EPA, they appear to be an offensive powerhouse. So it is incredibly helpful to include a wide range of data when trying to determine whether a team is truly "overrated" or underrated.

Lazy writing would be what some did last winter, only using DVOA to make a point when a plethora of other metrics are available for digestion.

With that said, it's safe to conclude that the Falcons outperformed themselves in 2012. So did the Ravens, who won the Superbowl even though they rank outside of the top five in both DVOA and GWP. They are not tell-all numbers, and any good season will usually involve a team "outperforming" itself.

But in a sense, Atlanta's offseason moves also reflect what the numbers say. The running game was unsuccessful. The team cut Michael Turner and signed Steven Jackson. The run defense was also unsuccessful. Thomas Dimitroff drafted a run-stopping strong side defensive end in Malliciah Goodman, and Mike Nolan is apparently considering Kroy Biermann at linebacker.

The advanced stats are useful tools, and their prevalence in mainstream football fandom is only growing. Perhaps we will even see a "Moneyball" type of movement in the NFL someday. Time will tell.