2013 NFL Free Agency: John Abraham Is Not Coming Back

The beloved veteran pass rusher is not returning to the Atlanta Falcons.

Share All sharing options for: 2013 NFL Free Agency: John Abraham Is Not Coming Back

For the longest time, a large portion of the fanbase has held on to the idea that John Abraham would return to the Falcons. That sentiment is understandable, but the writing is on the wall.

When the Falcons signed Osi Umenyiora, everyone either exalted or despaired for a few short minutes. Then many of you turned your attention back to John Abraham. When the Falcons drafted two pass rushers, there was more of that despair, followed by a bit of hope that Abe would be back. It's time, at last, to let go of that desire. 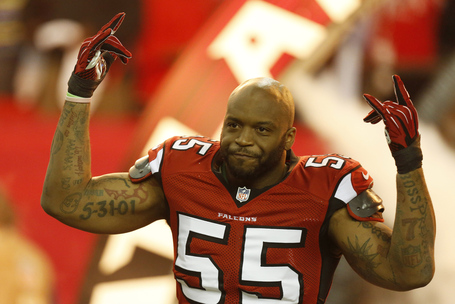 As Pat Yasinskas wrote this morning, the Falcons signaled their intent when they let Abe go in the first place. The uncertainty many of us felt was more a product of not really wanting to let go of Abraham, and being unsure how the draft would unfold. Now that the team has taken two pass-rushing defensive ends in addition to adding Osi, and they're reportedly quite high on both Malliciah Goodman and Stansly Maponga. The chances of them adding a part-time pass rusher over the age of 35 has plummeted.

It's a shame because most of us get attached, even though we know roster turnover is a part of life. It's a shame because Abraham did a lot for this franchise, and while you can't say he wasn't compensated for that, no one likes to be cut out of the blue and then be unable to find a job. Looking at this coldly from the perspective of the team, however, it makes sense to go with multiple young players at defensive end, where so few supposed upgrades have worked and adding athleticism and multiple options may just be the best bet.

I'll certainly miss the Predator, and I wish him well no matter where he lands. For our part, it's time to start getting ready for Goodman, Maponga, Osi and the rest to (hopefully) wreak havoc.

Your thoughts on Abraham?

Are the Falcons done in free agency? NO!