Last Friday's introductory press conference for the Atlanta Falcon's newly acquired running back Steven Jackson marked the official end of the Michael Turner era. Turner, Atlanta's lead back for five seasons, was the first major free agent signing of Thomas Dimitroff's reign as Supreme Comrade and arguably his best. While Turner's performance plummeted in 2012 (perhaps aided by the intense gravitational field created by his waistline), it is important to remember just how much of an impact that #33 had on the Falcon's offensive performance.

But it's a new era now, one in which Steven Jackson will be leading the Atlanta Falcons rushing attack. Before we can start to project what SJax will accomplish for our beloved Birds going forward, let's look back at how #39 performed during the same 2008-2012 stretch.

Steven Jackson was no scratch. His attempts and yards per season are right in line with Turner, and outside of 2010, his yards per carry has been consistently above 4.0. The other area where SJax excelled was pass catching. While Michael Turner only caught 59 balls his entire Atlanta career for an average of 91 reception yards per season, Steven Jackson averaged 43 catches per year from 2008 to 2012, putting up nearly 350 yards per year through the air in addition to his ground performance. While Michael Turner was definitely the better pure running back, you could make an argument that Steven Jackson's versatility at least puts him in the conversation for the most impactful player of the two.

The noticeable difference on these charts is obviously touchdowns, and this is when we need to start considering context. As James Rael referenced earlier, Steven Jackson was not exactly playing with a bunch of world-beaters. 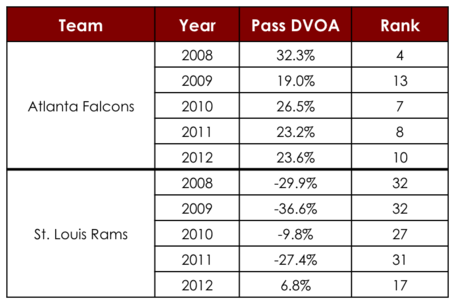  Whereas Michael Turner was playing with a passing offense that was consistently among the top teams in the league in terms of DVOA (DVOA explained here), Steven Jackson was playing with a passing offense that was consistently the worst. And offensive line performance doesn't really play a factor. Atlanta's run blocking ranking on Football Outsiders fell to the bottom third of the league after Harvey Dahl left in free agency (from 8th overall in 2010 to 27th in 2011), but St. Louis was in the bottom 5 in the league from to 2008 to 2011. 2012 was the only year in which the Rams' offensive line was ranked higher than the Falcons, when the maulers on the St. Louis front line managed to climb all the way to 14th. Steven Jackson earned his yards.

I think most fans would agree that the 2011 season marked something of a turning point for Michael Turner. The O-line was not the same, true, but Turner's performance seemed... lesser. He needed longer to get a head of steam and there was less confidence in his ability to get yards when we needed them. That is largely why many of us were supportive of his release. The question is: has Steven Jackson been any better over the past few years, and will he be better going forward?

When looking at historical NFL stats, the best numbers to compare are plays when the game is within two scores (i.e., the teams are within 14 points of each other). This eliminates garbage time stats and conservative play calling from corrupting the data. Using only these "within 2 scores" data, let's look at how Michael Turner and Steven Jackson performed in both long and short yardage situations, using 2011 as a demarcation point.

 From 2008 to 2010, Turner was over half a yard per carry better than Jackson in situations where there were 4 or more yards to go for a first down. The two were closer in situations where less than 3 yards were needed for first down, but Turner still edged Jackson by .3 yards per carry. 2011 to 2012 tells a more interesting story. Jackson was almost the same in 4 or More situations, but Turner fell by .7 yards per carry to 4.0, .2 less than Jackson. However, in short yardage, Turner was actually better than he was from 2008 to 2010, at 3.9 yards per carry. Jackson improved as well, to 3.8.

But that doesn't feel right. And that's why we have to return to advanced stats that account for the competition. Football Outsider's two main stats for running backs are DYAR and DVOA. DYAR stands for Defense-adjusted Yards Above Replacement, and it places a value on the running back performance compared to replacement level (i.e., league-average), adjusted for the opponent, then translated into yardage. It's a better measure than DVOA (which looks at a running back's performance over average per play) because it accounts for the cumulative value of a player who participates in an above-average number of plays. It essentially says "what is the yardage value of Michael Turner if we gave all his carries to some combination of Jason Snelling and Antone Smith?" More details on DYAR can be found here.

Michael Turner, meet downward trend. Mike's been regressing in DYAR since his first year, and fell off the map in 2012. Jackson's been less consistent year to year, but the past two season has seen him on the upswing (and he had a massive performance in 2012, aided in part by facing two of the top-rated defensive teams, Seattle and San Francisco, twice each). If these trend lines mean anything, it wouldn't be unreasonable to expect an 80 to 100 DYAR for SJax this year. Had we kept Turner, the best we could have hoped for was somewhere between Replacement Level (zero) and 30.

What should we take away from this comparison? First, applaud Michael Turner for the value he brought to our team. He was other-worldly in 2008, but extremely valuable throughout 80% of his career in Atlanta. 2012 was an abomination, but try to not let the recency effect impact how you view him. He owns the franchise record for touchdowns, and was less than six hundred yards away for the franchise record in yards (in one less season than Gerald Riggs took to achieve it). Second, it's okay to be optimistic about Steven Jackson. His advanced stats indicate he's still got plenty left in the tank. He's never played with a passing offense remotely near the top 10, and even if you doubt the run blocking ability of Sam Baker and Company, SJax has only once had a semi-decent offensive line in the past five seasons. He won't have the cumulative impact on the franchise that Turner had, but he will definitely have a positive impact on the Falcons offensive performance over the next two to three years.