Falcons Save $16 Million With Cuts Of Turner, Robinson, Abraham

Just how much did the Falcons save? We'll tell you.

Share All sharing options for: Falcons Save $16 Million With Cuts Of Turner, Robinson, Abraham

The Falcons were only about $4.5 million under the cap as of yesterday, which is hardly enough money to re-sign Vance Walker and pay all those hot dog vendors. Clearly, the team was going to have to make some cuts.

After the big name releases of Michael Turner, Dunta Robinson and John Abraham today, the team has some space to lock up their own guys, make a splash or two in free agency and ink the incoming 2013 NFL Draft class.

I can't lock down these numbers and tell you that they're absolutely, unequivocally correct just yet, because nobody has 100% mastery of where the cap stands. But I can give you a pretty damn good estimate. 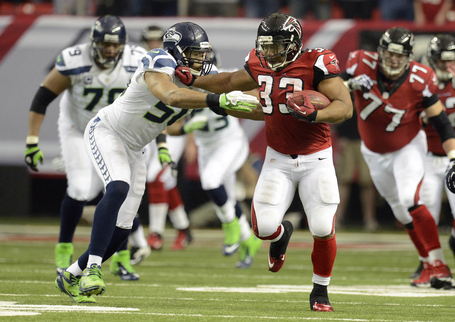 Pat Yasinskas at ESPN has the Falcons saving the following:

Added together with my trusty abacus, we come out with $16.4 million in savings right now. That roster bonus puts us at $19.4 million, plus the $4.5 million under the $123.9 million cap the Falcons already were at.

These moves hurt us because, at least in my case, I genuinely loved and respected Michael Turner and John Abraham, and I was fond of Dunta Robinson. But in terms of improving this football team, they were the right moves, and the only moves the team could make to free up enough cap space to make the changes we wanted to see. They lost three good players and the pass rush remains an open question, but that doesn't mean this wasn't the right thing to do.

Knowing that the Falcons are going to save $16-plus million, are you happy with these moves?