Where do we go from here?

In my last article, we took a look at the offensive line, why we need help, and what we can expect from the draft. This time, we're turning to the defensive side of the ball, where we seem desperate for change.

Atlanta's Defense is currently ranked second to last in yards allowed per play (6.1), trailing only San Diego (6.5). After the Buffalo game, Atlanta's Front 7 has the worst rated pass rush in the league by multiple accounts - the fewest combined sacks, hits, and hurries total, and fewest as a percentage of pass rushing snaps...and it's not even close. We currently sit with 7.6% of our pass rush attempts generating pressure, with the next closest team at 8.3% (Cleveland). We are 3rd worst in rushing yards allowed, and tied for 3rd worst in rushing yards per attempt. Most likely a contributing factor in all of this: The front seven lead the league in Missed Tackles with 47.

Had enough? Me too.

For those of you that did not catch the review on offensive lineman, check out the evaluation here. It will provide a good basis for some comparative expectations between the offensive and defensive lines. I'll also provide a summary at the end for reference.

Again, "Significant Snaps" is defined as 300 or more plays in a season, or on pace for that in 2013. This data analysis includes 136 Defensive Ends and 108 Defensive Tackles drafted since 2008. I'll let you know that I removed one player from the analysis due to being a significant statistical outlier - Tyson Jackson. He registered a -41.0 grade on 700 snaps his rookie year as the third overall pick in 2009. Kansas failed miserably on that pick, which I'll get back to further along in the article

Getting right down to business, let's look at the Defensive Ends playing significant snaps. 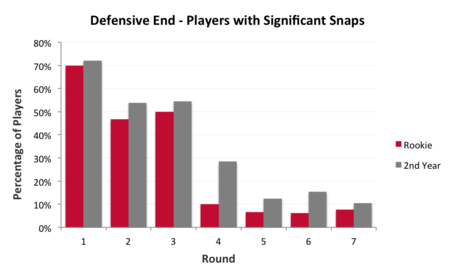 The first round players see the field significantly more than players drafted subsequently. That's not surprising. What's interesting to me is the consistency between second and third round drafts. After that, the expectation drops dramatically. Now, let's see if the grading in those rounds follows suit. I condensed it to the first four rounds: 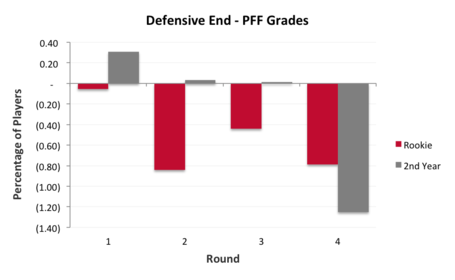 Similarly to the previous chart, we see another dramatic drop in performance in round two. Third round picks have comparatively performed better their Rookie year, which could be why the playing time is slightly higher. The first three rounds all show major improvements in performance in year two, and this is where second round players have caught up.

Let's see if top ten picks tend to perform better or worse than drafts later in the round. 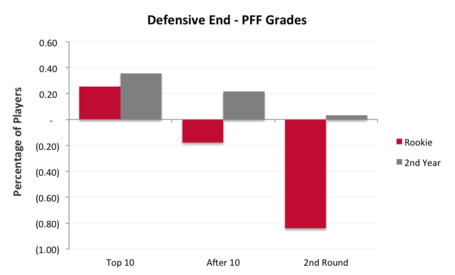 Generally and with authority, yes. (I can hear the Clowney chants already...please keep reading!). Later picks catch up quite a bit in year two, though they grade out only half as well.

Here's all the same information for Defensive Tackles. 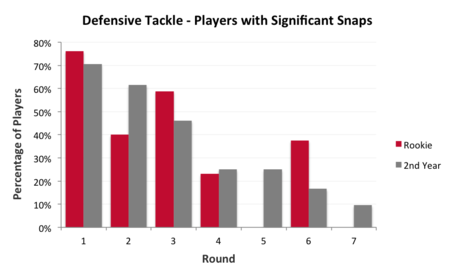 Round one looks similar to DEs. Round two, on the other hand, shows that rookies tank in terms of seeing the field, while round three jumps back up. The rounds swap playing time in the second year. 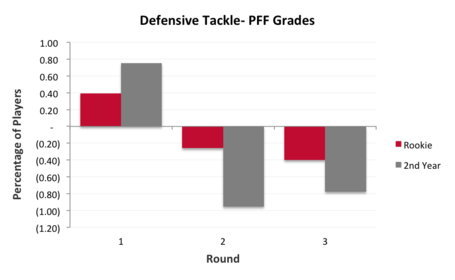 First round picks perform well right away and improve greatly into year two. Neither of the other rounds averages out very well. It's a similar overall trend for both Defensive Ends and Tackles - we see so significant difference between second and third round picks. 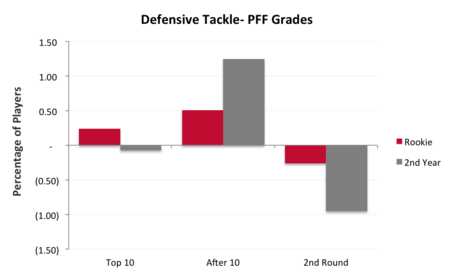 Top then picks perform worse than those picked later in round one. This mirrors the offensive line information. Why do Offensive Lineman and Defensive Tackles have this same trend and Defensive Ends don't? A couple guesses: scouts are more easily able to judge DEs, or a DE's college success naturally translates to the NFL, so hype wouldn't really affect them. Either way, we can see some sort of bias when judging DTs. 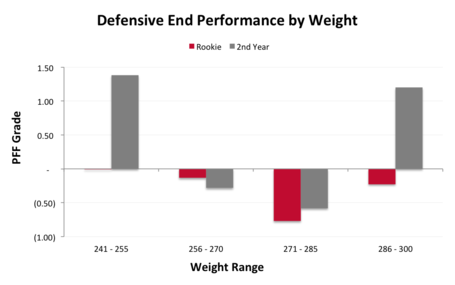 I thought this was really cool, and makes sense the more I think about it. Lighter DEs perform well with speed and agility; Heavier DEs succeed with strength and technique; those stuck in the middle just don't seem to have a good balance of traits.

Moving away from physical size, the Combine measures seven events. The Wonderlic, a cognitive test focused on learning abilities and problem solving, is not exposed (that would be way too much fun). We'll have to stick with the other six. Two of the six events actually appear to show no correlation to future success: 40-yard dash and bench press. The other four do (Vertical Jump, Broad Jump, Shuttle, and 3-Cone).

In order to set up comparisons, I counted the number of events in which a player performed better than average. Then, I averaged the performance grades. Here's what I got: 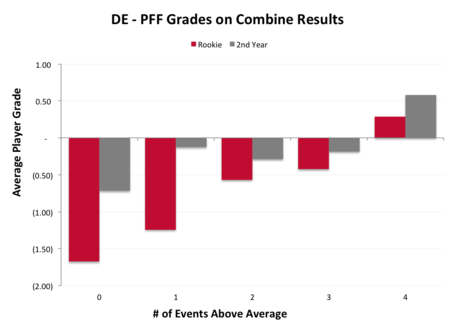 Generally speaking, for every event a player performs better than average, we see a marked improvement in future performance. This is the part where I circle back to Tyson Jackson. Remember, I excluded him from the grading analysis for sucking it up! performing poorly. He weighed 296 pounds, right in one of the sweet spots, but that wasn't enough. He performed worse than average in all four events correlated with positive performance. To add insult to injury, he was also slower in the 40-yard dash. He didn't bench press; otherwise we would have more to laugh at. 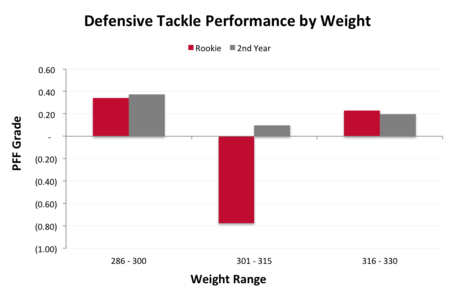 Defensive Tackles show a similar distribution as DEs, with the players in the mid-weight range performing the worst. There is, however, a significant performance boost into the second year of play.

The Combine boasts three events that show a strong positive correlation in rookie year performance: Vertical Jump, Broad Jump, and Shuttle. Since the Vertical Jump doesn't seem to have any correlation in year two, I'll focus on just the latter two events. 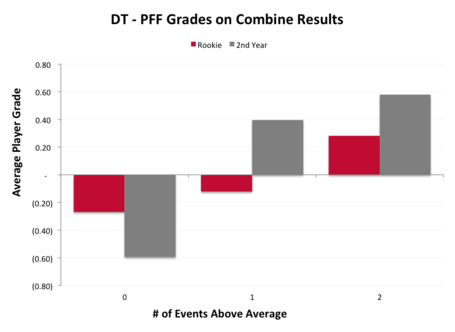 Again, for every event a player performs above average at the Combine, they tend to perform better in the NFL. It's a pretty limited projection, but being worse than average in both events is not a good sign.

Since the Combine analysis received some interest the last go 'round, I thought I would extend it to physical measurements this time. I was only able to find user-friendly data for 2012 and 2013 drafts. Still, it should be enough data points to make things interesting. I looked at height, arm length, and hand size, though the latter showed absolutely no impact on performance. So first, let's look at arm length and Rookie PFF Grades: 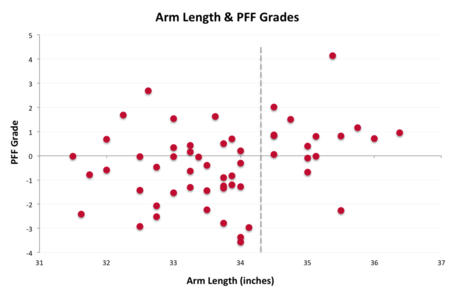 You'll notice that there's a clear shift in grades from player with arm lengths above 34.25 inches (the grey dotted line). The performance within each section is fairly neutral, but that threshold seems to make a difference in rookie year performance

Since taller people generally have longer arms, I would think that height affects performance, as well. It's partially true, but with a slightly different look: 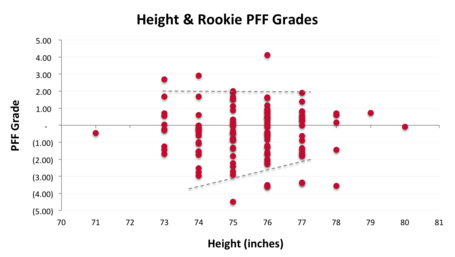 The space between players at a given height starts to shrink. This is called funneling (put your beer funnel away, for a second). Funneling refers to smaller variability as one number changes. Here, with an increase in height, the general distribution of grades condenses from the lower end. In other words, a player of any height seems to have the same upside potential. However, as height increases, the possibility of poor performance decreases.

To take all of this a step further, I summed heights and arm lengths, then plotted the same information. They grey dots still represent players, just marked as outliers of the group to help you see the trend: 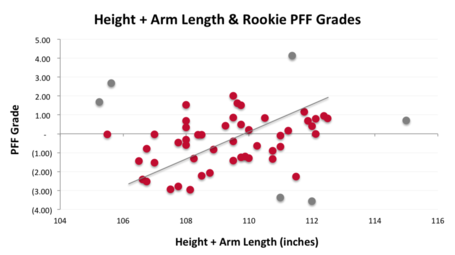 No shift. No Funneling. This is just a strong positive trend. But all of these grading plots refer to rookie year performance. For the final chart, here's how the second year grades look: 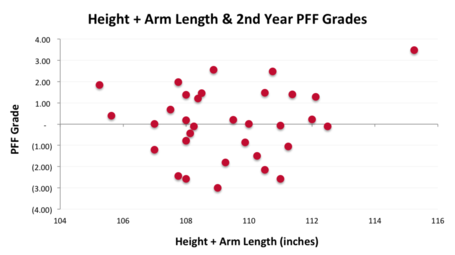 Against conventional thinking, there is absolutely no correlation. Not with either measurement individually or both combined. DID THAT JUST BLOW YOUR MIND?

Seriously, though, I would be curious to keep an eye out to see if this trend holds. It's definitely a knock against traditional thinking, so I may grab more historical information when I have time to manually enter it. Bummer.

Both Defensive Ends and Tackles show a much better performance when coming out of the first round. As far as DEs go, that performance is even more isolated. Top ten picks have shown a major leap above the rest, especially the first year.

Over the past four years, the first round has averaged 9.5 picks on the defensive line (starting in 2010 - 9, 10, 10, 9). Most projections show six expected for 2014. Paired with the overall performance drops after round one, this makes a strong argument for the best available defensive line player with our first pick. The Tackle position becomes statistically intriguing since the second year performance doesn't improve much after round one. This is highly skewed from the 2011 draft, though, and looking at position depth and position quality, Defensive End has a strong case, as well. All this is said assuming we get a Defensive Line coach that knows what to do.

The Combine measurements seem to do a pretty good job prospecting players. Strength (Vertical Jump), Body Control (Broad Jump), Speed (Shuttle), and Agility (3-cone) provide great insights into a player's potential. These can be coached, to some degree, but teams should also rely on these metrics to find value in later rounds. Hopefully we will see people move on from the other events and especially arm length, though it seems to help during the initial transition from college.

In the case of Tyson Jackson, as mentioned above, coaches should definitely not ignore combine measurements just because of hype. Jackson was touted as the number one DE in 2009, having good size, strength, and speed, yet he performed worse in every relevant category. Clearly, Kansas ignored the data.

I'll close out this article by saying the same thing I did before, and I'll continue to say it for a while: data cannot be independently used to make decisions. It's like playing Poker - Just because you have a great hand doesn't mean you should ignore an obvious tell. In football, every draft has different players with intangibles or qualities that are not graded well by Combine Metrics. Other events, interview, and game tape also play a major role. Data should be used to challenge the eye test and question preconceived thought. It aids in objectivity.

If you'd like to see any more detail, feel free to request it in the comments. I'll move to Linebackers to round out the Front 7 unless I see a strong enough request for a different position! Do you see anything interesting? What's your take on the Defensive Line?

As promised, here are the Rookie and Second year performance by round for all positions analyzed. 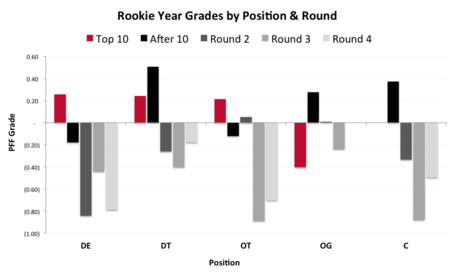 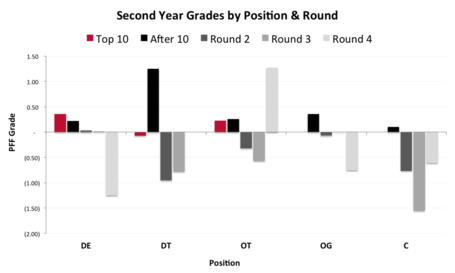