How Good has Trufant Been? Damn Good

A good corner is worth his weight in gold.

Share All sharing options for: How Good has Trufant Been? Damn Good

During the 2013 NFL draft, many Falcons fans lamented the fact that Dimitroff traded away our 3rd round and 6th round picks to move up and draft Desmond Trufant with our first round pick. Many fans felt that there were several corners we could have taken - that would have been as good, if not better than Tru. Also, as the off-season camp and pre-season moved along, many fans grew frustrated by the reports of his struggles and quite a few suggested we should roll with Alford as our starting corner alongside Asante. A few fans even went so far as to call Des a bust (ridiculous, yes).

As it turns out - those fans were wrong.

By now, we've all come to realize that Trufant wasn't just a good first round pick - he was a great one. He's easily the best corner taken in the first round, and is probably one of the better defensive picks of the entire draft. But how good has he been, and how does his rookie year compare to those of some top corners in the league? Let's take a look.

First, let's take a look at his rankings across the NFL for the 2013 season (using PFF stats): 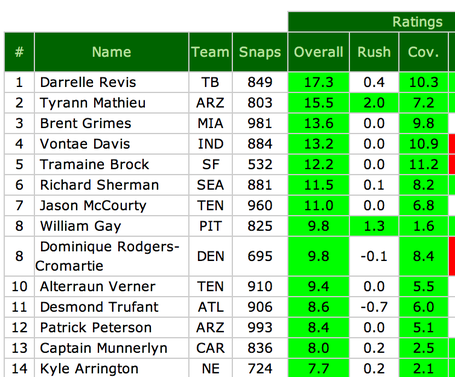 As you can see here, Trufant is #11 in the NFL. The names above him are no slouches either. Also consider this - if you only include the players who have played 75% of snaps or more on the year, he moves up to #9. I think it's fair to say that Trufant can be considered a top 10 corner in his first year in the league.

But how impressive is that really? Shouldn't a first round rookie cornerback perform at a high level? Not necessarily. Most NFL experts agree that corner is a position that sees a lot of growth between year 1 and year 2. For comparison, let's look at the numbers for a couple of very good corners in their first years: Patrick Peterson and Richard Sherman:

Now look at Trufant's numbers through the first 14 games: +8.6, +6.0, 13PD. As you can see, Tru compare well with Sherman and is easily having a much better season than Peterson - and both of those guys are considered to be two of the better corners in the league.

Here are some other numbers to chew on as well: Des is currently allowing a 55% completion percentage, a 77.9 QB rating, and 12.2YPC average with 3TDs and 2INTs. Those are solid numbers for a veteran, and even more so for a rookie. His 13 pass deflections has him tied for first in the league as well.

In one of the worst seasons in recent memory for the Falcons, it's important to draw focus to the few good things going on with the team. And all Falcons fans should be thankful for Trufant and his very impressive rookie season.