The Third Quarter Meltdown: Not Quite

The general consensus points to the Falcons' second half woes, but that's not the whole story.

Share All sharing options for: The Third Quarter Meltdown: Not Quite

More often these days, I hear comments about the Falcons' patented third quarter implosion. I hear conversations about the halftime adjustments, or lack thereof. I also hear voices in my head, but that's beside the point. As I've specified before, I love using data to support or challenge theory, so I thought this would be a perfect opportunity to explore our team's performance. With that in mind, let's see whether there's truth to this perception.

The first question I asked myself was if halftime adjustments really exist. From my experience playing sports, the break between halves really provides a regrouping session, not necessarily a chance to change strategies. Teams normally have minimal time to discuss the game before getting back onto the field, court, rink, or wherever else they play a sport. In other words, it's a refresher on game preparation. Not having played football myself, I tried to find some reputable sources discussing this break in the game as it applies to the NFL.

USA Today interviewed Phil Simms about the halftime adjustments. Say what you will about the guy, he's credited with the "I'm going to Disney World!" phrase after winning a Superbowl. He believes that the adjustments are less severe than most people think:

[Half time adjustments are] just never as significant as everyone paints them out to be on TV, such as blocking changes or pass-pattern changes or something drastic that's going to happen in the second half. I just cannot recall making all those major changes whenever we played better in the second half.

D. Orlando Ledbetter interviewed Bill Belichick recently. While DOL might be off-kilter, the Patriots head coach should provide a believable perspective. He says:

If you wait [until] halftime, a lot of football has gone by the boards before you make any adjustments, but I think in the NFL you see teams making adjustments after each series. …One team does something, the other team adjusts to it. That [team] counters their adjustment, and it goes back and forth. It goes on all game. I don’t think the halftime adjustment thing is that big of a deal because it goes on continuously from the first series of the game...

There's also some entertaining commentary from Mike Nolan and Dirk Koetter, both indirectly alluding to the halftime adjustments being a myth. They also seem to displace blame...just a bit.

Halftime is about 7 ½ minutes so you’re in (the locker room) and guys are getting something to drink, going to the bathroom and we talk amongst the coaches on a few things we want to hit on.

Even his players understand that. Zach Strief, the Saints' Right Tackle, stresses the importance of in-game adjustments. He goes on to say:

It’s a testament to that coaching staff, coach Payton, the leader of that group, and Drew, who is prepared every week.

I put emphasis on the word 'prepared' for a reason. All of these guys point to one thing other than adjustments: game preparation. Teams spend so much time analyzing game tape, looking at plays and tendencies, and strategizing around minor details from an opponent's previous games. That cannot be redone in less than ten minutes, only honed.

So when we look at the Falcons inability to adjust, I want to lean away from isolating the halftime break. That change from second to third quarter isn't causing anything. It's simply a progression of the game.

I'll dig into this more by looking at some quantitative measures below.

The Falcons' Woes Start in the Second Half Quarter

I'll go ahead and tell you: we don't start falling-off in the third quarter. It really begins after the first 15 minutes of the game. Take a look at our point differential by quarter:

Here are a few issues that start in the second quarter, as well. 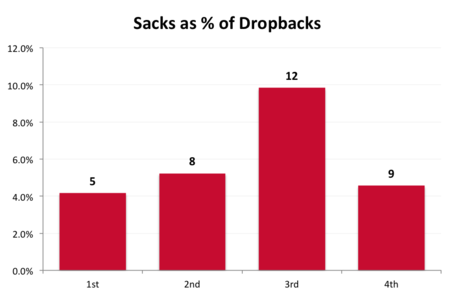 The red bars show the percentage of sacks, and the number on top is the total sack number.

So there it is. The number of sacks increases after the First Quarter, both as a whole and a percentage of dropbacks. But why the major jump in the third quarter? We stop being able to move the ball. We find ourselves in tough third-down spots, which makes it easier from opponents to get to our QB: 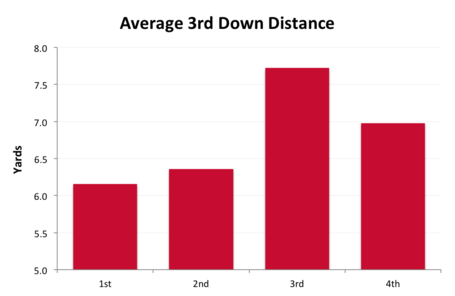 The average third down distance jumps by almost 1.5 yards. I think that's enough to inflict some pain. While you may be able to argue that shows poor adjustments, let's take a look at something: 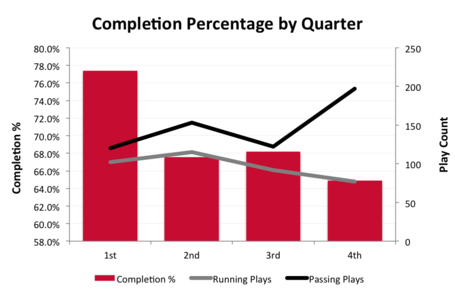 The pass distribution slowly increases all game, correlating with a decrease in effectiveness. I couldn't find any good source to pull yards per carry by quarter, but wish I had it for you...Either way, our offense just seems worn down.

Looking at turnovers, we see that first quarter performance is, again, much better. 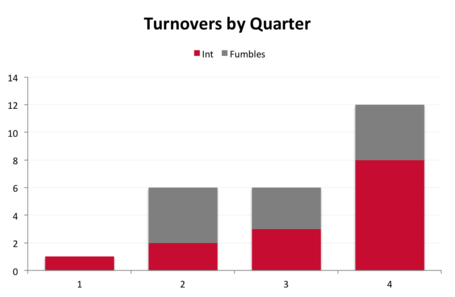 I do find it impressive that eight of the fourteen interceptions have come in the fourth quarter. I'm not saying they're all smart decisions; Matt Ryan just generally plays better when not trying to force a comeback with a broken receiving corps. Don't get me wrong; I still blame him to some degree, as I've started blaming everyone, but our position isn't doing him any favors.

Anyways, our points allowed correlates with turning the ball over...except the second quarter. So, let's look at the same metric defensively: 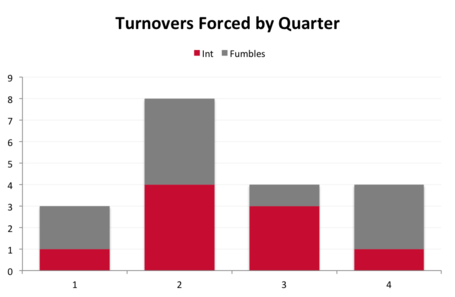 Turnover from overtime in the Buffalo game is included in the fourth quarter.

This is not quite what I expected. The defense is allowing more points AND causing more turnovers, which leads to more offensive scoring. We are obviously not reaping the overall benefit, but it's interesting. Our defense has contributed seven points in the first quarter and fourteen points in the second, inflating the points-per-quarter by 0.5 and 1.0, respectively. That means the offense, on average, only scores 1.5 points less in the second half.

The turnover differential is only positive in the second quarter, so that doesn't explain the higher points allowed...but this might: 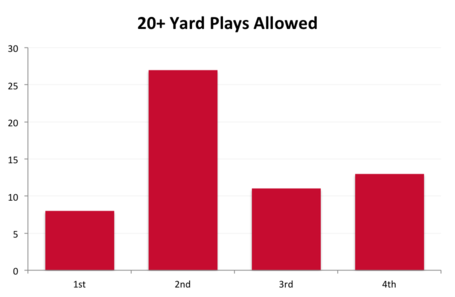 Again, I ask if this is a lack of half time adjustments? Impossible. Is it just the third quarter or second half? No. This is game execution, and we're falling flat. Despite recently creating more turnovers against some weak offenses, they just can't find a rhythm.

So What's The Issue?

Looking at this information, I think it's pretty clear that the performance is not isolated to the third or fourth quarters. The Falcons become tough to watch pretty quickly. I think we mask the second quarter issues with the offensive "success", failing to recognize the overall poor performance. Yes, we score more, but we also create more turnovers. Opposing teams then seem to succeed by taking shots. The perception of a third quarter implosion seems to be from a lack of offense. While that may be true, football is not purely an offensive game. In that regard, I think the perception is wrong.

If you only have one strong defensive and offensive quarter out of four, I think it fails to boil down to halftime adjustments. It's poor game planning, play calling, and probably conditioning. Injuries are a part of the game, and plenty of teams still find ways to win when players miss the field. In other words, I'm convinced there's no magic ten-minute break that makes teams play better or worse. Football is a chess match with 300-pound players, and I'm starting to think we can't look past our next move.

If you're curious about any other quarter-by-quarter stats, I'll do my best to provide the info.