Fact: The Offensive Line has been shuffled more times than a deck in a Vegas casino.

Let's face it - we have plenty of holes on the team for 2014, with the most obvious being on our lines. We will most likely have two open positions on the offensive side of the ball, with the center spot also primed for competition. On defense, we need a stronger defensive tackle, as well as a pass rushing threat at defensive end.

On top of that, Decoud's performance has been consistently degrading since his 2009 season as a second year player. We need a Tight End that can fill in for Tony Gonzalez, if that's possible, but we also haven't seen anyone get enough snaps. Weatherspoon's short tenure on the field has yielded some rough results, with missed tackles piling up similarly to previous years. Since the bye week, William Moore has had a rough season after starting pretty hot.

As we all juggle the team's needs and think about the draft, the consensus easily falls on the offensive and defensive lines, for good reason. The offensive line has allowed the fourth most combined sacks or hits through week 11. Of those 4 teams, Matt Ryan has the second shortest time-to-throw (behind Ryan Tannehill). Depending on how the line shuffles out this season, we will most likely look for a Guard or Tackle through the draft. Along with a Free Agency pickup, we can hope this will help solidify the line for a more successful 2014

As we think about our first round pick, the question becomes what position do we target? Through this and an additional article on the defensive side, we hopefully have a little insight into what we can expect to see from Thomas Dimitroff, Mike Smith, and the rest of the Front Office.

ProFootballFocus (PFF) started grading in 2008, so the performance reviews will mainly relate to draft picks between 2008 and 2013. I also ran reports from ProFootballReference (PFR) to get a list of picks. I matched these two sets of information, which can be annoying when shortened names or suffixed are used...but I digress.

During this period, 242 offensive linemen were selected. Of those, I broke down, by round, the percentage of players that ended up playing a significant number as snaps, which I define as 300 or more. The current pace is projected for the year for 2013 draft picks 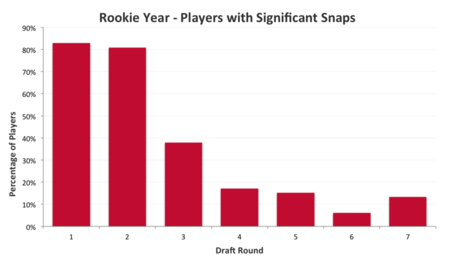 It's interesting to see the percentage stay the same into round 2. After that, the expectations drop dramatically...but what about the performance of those players?

To establish this, I took a weighted PFF grade based on the number of snaps played, and multiplied this per snap rating by 60. This, in theory, should give us an average one-game PFF score for each player. When averaging those grades in each round, I get these results: 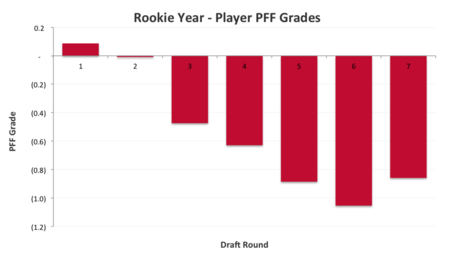 Again, we see no drastic difference in performance between the first (+0.1) and second (0.0) round. Those are both relatively neutral grades. After the second round, like above, performance falls off drastically. This got me thinking, when does the average performance really start to slow down? Is the first round average deflated between high picks and late picks?

13 Offensive Linemen have been taken as a top-10 pick over the past 6 drafts. Comparing those players with other picks in the first two rounds, here's the percentage of players grading positively: 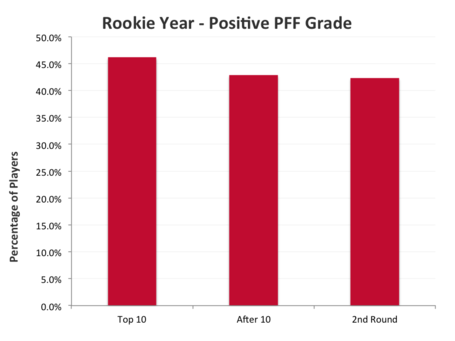 Yet again, we see that, historically, there's not a big difference between top-10 picks and picks made later in the first round OR into the second round. Though the top-10 graph is slightly higher, statistically there's not a big enough gap to conclude anything. This provides good insight into what we can expect from our draft picks for the 2014 season, though I'm sure you're also concerned about subsequent performance.

Using the same information as above, the following charts show a player's performance their second year in the league. Obviously, players drafted in 2013 cannot be included. Since the above analysis shows poor results after the second round, these charts will be limited to just first and second round picks. 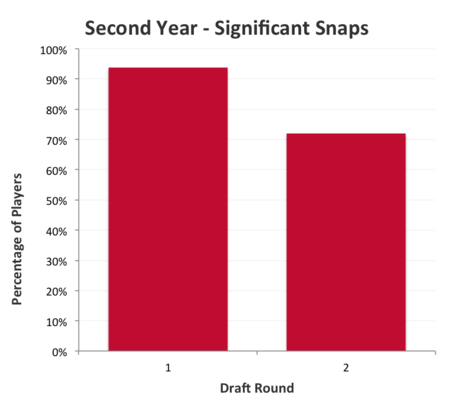 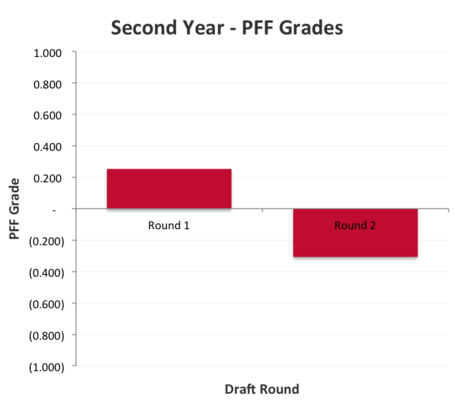 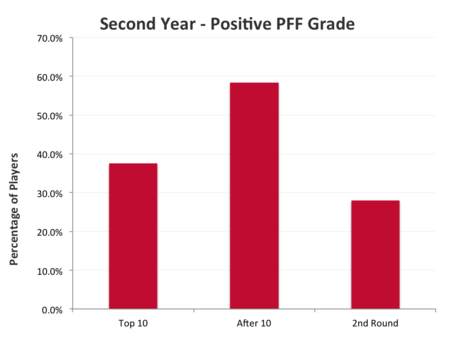 What does each data set suggest with complete agreement? Second round picks are not as reliable in their second year on the field. Their grades decrease slightly, though the same portion of players see a significant number of snaps.

It also shows that first round picks have a higher proportion of players seeing the field, as well as showing moderate performance improvement. A PFF grade at +.32 per game would be +5.5 over a season. Comparing this number with offensive line grades from last year would put a player in the top 40%. However, by looking at the top-10 picks, I get the sense that projected performance can be highly unreliable. Hype can drive up a player's value, allowing better linemen to fall in the draft.

I found it odd that less than half of first and second round picks ended up with positive grades after two years. So, I wanted to see the how the results have looked by year. Here's something interesting. 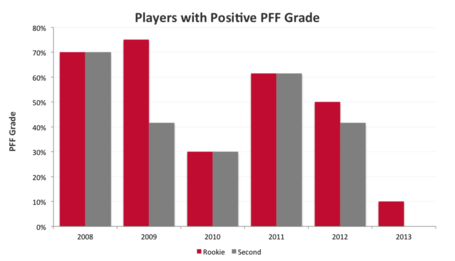 Since 2008, lineman success rates have been falling, with the 2013 results being the worst so far. It would be hard to find the root-cause of this, but it sure suggests that scouts have a harder time gauging potential success in the NFL, or the player capabilities just are not keeping up. Let's hope 2014 is different...

To take the results a step further, I wanted to look at draft picks in the 10 years prior to PFF grading, so 1998 - 2007. Since we don't have any performance grades, counting the number of All-Pros and Pro-Bowlers should give a good comparative measure between first and second round pick performance. 94 linemen were drafted in the first two rounds during that stretch. As a percentage of picks, here's how the rounds compare in generating players that receive either recognition. This information was pulled from PFR. 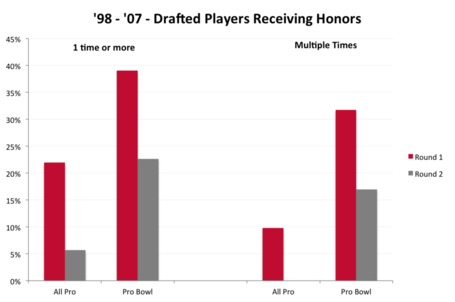 As you can see above, first round draft picks have more than twice the success of achieving either honor.

I won't sit here and spit off a bunch of statistics about the NFL Combine. It's hard to take all the results and predict performance - yes, I created formulas. I found weak individual predictors, though combinations of variables resulted in a decent grading system. Without getting too specific, I will tell you that two variables seem to have a decent correlation with success: Weight, and Bench Press Reps:

First, lets look at the average PFF grades, separated by weight range when at The Combine: 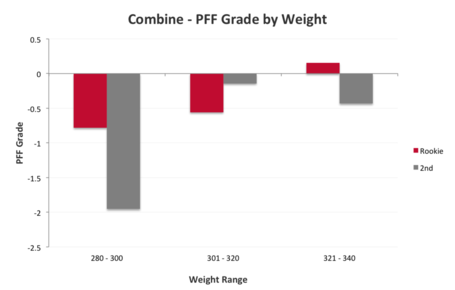 There were a few players below and above these ranges, but too few to chart performance. In short, this display shows that being under weight has a significant impact on NFL success.

On the bench press, it's not necessarily how many reps a player puts up in general. It's how he compares to others within the weight group. For players receiving a +0.5 per game PFF grade their rookie year, 78% bench pressed more than average. For those receiving grades worse then -0.5 per game, only 40% of those can say the same. Again, it's not a perfect predictor, but it's actually a little better than the draft success from the previous 6 years...

Looking at our current offensive line grades, let's rank each "starter" - whatever that means...

Blalock has been pretty consistent on the year, and ranks well among Guards in the NFL. Reynolds, though grading positively on the season, has been horrible the past three games. He went from averaging a +1 grade to -1. Trueblood has also been bad, getting worse the past three games, as well. Holmes had a very, very shaky start to the season while jumping around the line and getting up to speed. He has not put in great scores these last few games, but it is a drastic improvement. Konz has been pretty awful all season, though the performance has accelerated downward.

Hawley put in grades of -0.1 against Tampa and +2.2 against New Orleans. Though it's limited exposure, we're talking about two teams with defensive fronts that don't slouch. I think this is promising, and along with Holmes, we can hopefully rely on improvements the rest of the year.

At his current pace, Reynolds would grade at -16 on the season, which would put him 5th worst in 2012 and 14th worst if we push forward the 2013 grades. Trueblood would also grade -16, which would land at 7th worst in 2012, 9th worst in 2013. Regardless of selecting a lineman in the first or second round, we can most likely expect an improvement at either position.

As an additional review of our line, I wanted to share their Combine results. The following players are all in the same weight group that averages 23 Bench Press Reps: Konz only put up 18, Trueblood came out with 20, and Reynolds had 19.

Holmes barely fell short, with 22 compared to the 23 average. More impressively, Hawley put up 35 compared to a 19 average, and Blalock came in with 40 reps compared to his peers at 23.

What does all this imply?

While a first round draft at offensive line would be great, we don't necessarily need one to improve the status quo. Our performances at Tackle and Guard are so bad that a pick in the second round will most likely give us better protection for Matt Ryan and run blocking for SJax/Quizz/Snelling/Smith/Vaughn (like the latter two will get many carries...). This draft has a unique depth of talent on the offensive line. 16 players are currently projected to go in the first 2 rounds. Compare that to a 9 per year average between '98 and '07, and 11 between '08 and '13. This makes me think that we have the flexibility to look elsewhere if there's a better player available at a position of need.

Lineman success can come from many different places and be a combination of different fundamentals. I will specifically be wary of any lineman under 300 pounds, though none of the projected first or second-rounders come in under that right now. I will also look for players that show weakness compared to their peers on the bench press. Like I said previously, it's not a perfect predictor, but just thinking about what linemen do, it makes sense to perform well in that category. I can also hope that the Falcons' front office will look beyond the hype and objectively gauge each player, especially for offensive linemen. The previous three drafting years have yielded poor results at the line, and I would hate to keep that trend going...

Now, with all this said, numbers and history are just that - numbers and history. Each draft possesses a batch of unique players with identifiable talent. Game film and interviews can tell coaches a lot about player potential that statistics just can't. So while I can make the argument that our offensive line pick can come in either the first or second round, data analysis cannot capture intangibles. I just hope our recent scouting success carries over to next year.

Next up, I'll take a look at the other side of the football, where we desperately need help, as well. Feel free to discuss what you think about the draft options we have for the offensive line next year, and ask any questions or for additional information!