I don't like calling me team that, but facts are facts.

Share All sharing options for: Falcons-Bucs Recap: Worst Team In The NFL

It's the drive-by-drive recap again!

I missed the Falcons (first?) drive, so let's pick it up on the Bucs drive, middle of the first quarter.

Lord, the Bucs are running the ball with ease. Inside, outside, upside, downside. Running with ease. 3rd and 5 around our 40, nice try by Worrilow on a swing pass. Those are hard to stop within 5 yards.

Next first down. I'll take "What is a pass rush?" for 500, Alex. No, not you Alex Welch. I wouldn't ask you for a cure for Dave's alcoholism.

They've been plugging the heck out of this show, "Almost Human". Reminds me of the Falcons OL. Rather than being human, the Falcons OL is just goo. Just kidding, I know they're playing their asses off.

Man, we just cannot stop the run. Worrilow is literally everywhere where the ball is, but I worry that his game is lacking something. Great find though.

Bucs in the Dread Zone now. The run game is chugging along. We can't stop it. 3rd down now, we stop a short RB checkdown, Bucs get a field goal. A small victory, but it's the Bucs. So it's secretly a loss.

Any UGA fans in here? I'm not even gonna say it. Let's all cry together when this year is over.

First play is a @!#% penalty. This isn't UGA, who had a penalty on every other play yesterday. Come on, people. First play WAS a nice gain until that.

1st and 15, nice gain to HD (again.) 2nd and 1, nice screen to SJax. I guess the OL is looking better. But then again, this is the Bucs we're talking about. End of the first quarter, we're losing. Don't worry, I'm celebrating because I want the best draft pick possible.

So FOX is pushing another show that stars Kevin Bacon. Has there ever been a guy with a name so great that feels like he hasn't done anything in his career? You seem to see him around but he's never been a superstar.

Anywho, back to football. 2nd and 7, nice gain to Gonzo. Oh, a roughing the passer penalty. Actually, that's terrible. WOW, okay, the dude hit Matty about 3 days after he threw it. Looks like we're going no-huddle now, and that includes Hands of Truth (who just had a catch). Nice, rook.

I wonder if the Falcons switched the OL just to screw with the Bucs? I imagine if it works "better", they'll stick with it.1st down now, crappy draw play. The idea was good. Execution, nope. 2nd down, yuck, now it's 3rd and 8.

Hey look, a sack. You know, the previous iteration of this OL didn't give up many sacks. Also, that one was Konz's fault. Lot of things have been Konz's fault. How did we manage to get a lineman from Lineman University and he not play well?

Hey look everybody, a 500 yard pickup by the other Jax. Asante burned again. I love Asante, but Father Time has caught up to him. The Bucs remembered, "Hey, this is football!" and the Falcons remembered, "What is a condition look more like for calamity insurance pass interference?" Yes, that sentence should make no sense.

Bucs had a nice gain on that screen, but Worrilow was tackled. Easy holding call, so now it's 2nd and 19.

And now the Bucs have scored a touchdown. Lord, we are bad. The color commentator called it "complete dominance" by the Bucs OL against the Falcons DL.

Game isn't over by any stretch, but if you asked me which team looked better, I'd tell you, "It ain't us."

And now, an onside kick. Which we don't get.

1st down, look at the lack of a pass rush. I'll take "What is a pass rush?" for 400 now. He's standing so tall, he is fearless. Mike Glennon, a rookie, is completely without fear against our rush. That's not good.

Nice stop on the following first down. 2nd down, VJax gets called for offensive interference on Asante. Probably a good call for VJax, Asante was definitely in position and in good coverage there. Maybe he's not done after all.

Now it's 2nd and 20. Last time they had one of those, they ran for a TD. Thankfully, they didn't this time. Good deep coverage on 3rd down.

4th down, they run a fake punt. They almost had it, but McClain was not fooled and, thankfully, didn't catch the ball. So we get the ball in good field position now. Let's see if the O can do something with it.

Never mind. If you must know, Matt Ryan's arm is hit as he throws, which leads to a pick 6.

Literally, folks, nothing is going right in the state of Georgia right now. Except what's going on in Philips Arena, which is nice.

Matt Ryan's numbers look bad, but we all know he's not a bad quarterback. There's nothing you can do with an offensive line that can't protect. Just look at the difference. Glennon is playing better than Matty. Is he a better QB? Logical people know that that is not the case, but why is Glennon playing better? BECAUSE HE'S NOT GETTING DESTROYED EVERY PLAY

Here's a picture of Sean Locklear. 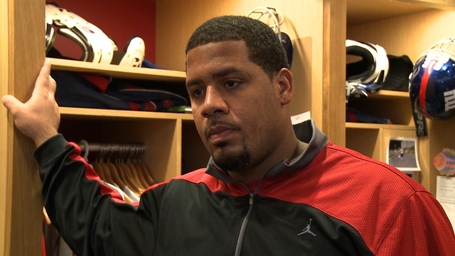 Two solid runs by SJax and a little protection and we're at the 40. Hands of Truth lets one goes through his hands. Probably better for his health. McCoy was getting ready to kill him.

Now a false start by Gonzo. Even he isn't immune to the derp.

Ugh, that was bad looking for Roddy. That looked awful. And of course he fumbled. And lost it. But still, that looked terrible.

Face mask? On Worrilow. Great. Folks, if we lose this game, we will lose out.

I have the US Grand Prix on my other TV. F1 racing can be boring at times, but I think I'd rather watch it. I will, however, fulfill my duty to this blog.

Man, F1 cars are so fast. It's a blast driving them in Gran Turismo.

Hey look, the Falcons defense isn't stopping anyone. Ugh. I can't even describe this stuff. They make it look easy. Like...I know injuries are real, but this team as a whole is yuck.

By the way, it's not even halftime.

I just realized Heath Evans is the color commentator. We hate that guy. Well, we get an easy 15 yards on a personal foul, then Quizz gets 8. Then Matty throws it to nobody. Turns out, Matty was throwing it at pass intereference. Nice one, Matty. Good eye.

Looks like we're turning into the Matty Fling Offense.

So I'm watching this F1 race. They just replaced the front wing of a car in literally 15 seconds. That was awesome. Or at least it seemed like 15 seconds. It was extremely fast. They don't do that in NASCAR.

Back to football, this is where Matt's got the tough sledding. He's so good during this time, but the yards from here on out won't be easy.

Two minute warning. First two plays out of that are incompletions. Where have I seen this before?

Imagine that, a crappy 3rd down play. WOO HOO!

Here comes Money Matt Bryant, this feels like a miss. Just wanted to type that before he kicked it. He makes it, then decides he wants to fight somebody.

Well, they've driven all the way down the field to the 37. In about 50 seconds. Still a long field goal, but still. Pretty sad that you can't stop THE BUCS like that. Thankfully, their kicker shanked the field goal.

So we go into halftime. This is ugly.

So NFL Network is advertising the Saints-Falcons game, and the narrator says, "...and the Falcons are out to prove they're still a force."

Bro, the only thing the Falcons are proving is that they're still a farce.

I don't like saying it, but there isn't much nice to say about the team right now. There just isn't.

Hey, we got the ball to start the second half!

Hey, we ran a crappy play on first down! Roddy looked terrible on that route. He looks like he's still hurt.

Hey, we ran a crappy draw on second down! Three and out police, here we come.

0 for 3 on 3rd down today. Matty killed as he throws, but there's a flag. Bodies were falling everywhere on that HD catch. Hey, DPI! Hooray us.

So F1 pitstops are literally 3 seconds long. They jack the nose up with some kind of jack, I guess they put 3 seconds of gas in the car. You think that wouldn't last very long. Wow, the jack man has to get the hell out of the way. Who thought putting him in front of the nose of the car was a good idea?

Falcons O picking up a little steam here. Nice first down play to Gonzo. Here comes a SJax run. Maybe not, we're audibling. Nope, quick pass towards Hands of Truth that misses badly. He was open, need to hit those.

3rd and 1, not a good pass, but catchable. Is that you, Mike Bobo? Go back to UGA. In fact, don't even go back there.

FOR THE LOVE OF GOD. RUN THE BALL. IT'S ONE YARD, YOU HAVE THREE PLAYS. IT'S NOT THE GOAL LINE

Hey look, a deep pass to VJax. Except he totally pushed DeCoud out of the way to catch that. But no call, like usual.

Then Rainey scores again. I wish we could fast forward to the draft. I pray...PRAY the Jags win today. I want the Falcons to be labeled as the worst team in the NFL so badly so that maybe their asses from GM to water boy will get their asses in gear.

First down, crap. Second down, flag on the defense. So we get a first down again.

Folks, the Bucs are beating us by 25.

So latest in the F1 race, they have heat vision cameras on one of the cars, and it shows the tires getting hot when they turn. That is really, really awesome.

Hey look, our first 3rd down conversion of the game. In the 3rd quarter.

Hey look, Garrett Reynolds is in the game now. Has Konz been perma-demoted?

3rd and 9 now. We're only allowed one 3rd down conversion a game. Yep, Roddy can't handle yet another pass. This doesn't look like Roddy White at all.

And the ensuing punt has been blocked. HOORAY! I love everything.

So the Bucs offense continues to churn along. 4th and 1? Do we stop them? Again, a question not worth asking. Easy pickup versus our jumbo package. Actually it was barely a pickup. BUT THEY STILL GOT IT, so that doesn't matter.

We are making Bobby Rainey look like an All-Pro. Dare I say we are...Making It Rainey? Yeah, I'm out of happiness.

Hooray, an easy fade to VJax! Poor Trufant. That said, that's not an easy cover. Funny we never do that to Julio.

I'm done, folks. I can't do this anymore. I want to, but I can't. I never imagined in my wildest dreams that the Falcons would be this terrible. Like I said before, the only way to make this stop is to stop watching. And right now, that's what I have to do. Feel free to discuss it in the comments. I'll be around.