Falcons vs. Seahawks Recap: It Got Worse

The 2013 Atlanta Falcons are not a good football team.

Share All sharing options for: Falcons vs. Seahawks Recap: It Got Worse

The Atlanta Falcons are a terrible football in 2013, and they're actually getting worse.

I can't take away any other lessons from this game. The Seattle Seahawks are a terrific team, and I think many of us came in expecting a loss. You just had to expect, given their narrow wins the two weeks before, that the Falcons wouldn't roll over and get destroyed by that Seahawks team. They had two disappointing losses in a row to reflect on and learn from.

Instead, the Seahawks left this Falcons team as little more than a smoking crater on the Georgia Dome turf. The Falcons were completely inept on offense, largely inept on defense and thoroughly outclassed in general. The Seahawks are one of the better teams in the NFL. The Falcons looked like one of the worst. It resulted in a 33-10 loss.

All you need to know is this: The run defense, which has been a strength, went straight to hell. Russell Wilson had an efficient 287 yards and 2 touchdowns. Matt Ryan averaged under five yards per pass, the ground game did nothing and the defense allowed over 450 yards. It was a hideous game.

It's tempting to find the excuses here, because they're ample and very real. The injuries, especially. Yet this is the third straight week where the Falcons ceased to be competitive somewhere along the way, and in this game, they weren't competitive from the very start. I honestly don't think I've seen them look worse in the Mike Smith era, and while you have to chalk a lot of that up to a very tough Seahawks team, you also have to acknowledge that this Falcons squad is a shell of what it was over the last five years. Top to bottom, they're playing lousy football.

Really, when the failure is this systemic and there's little in the way of cavalry on the way, it's hard to find the light at the end of the tunnel in 2013. We're better off realizing it's not there.

I'm not telling you anything you don't know. The Falcons are terrible, and the best thing we can do is ride the year out, hope for improvement somewhere along the way and see what the off-season brings. There's still enough here to envision a I'd advise picking up a hobby. Maybe knitting.

Brief breakdowns belief, because that's all I have the stomach for. 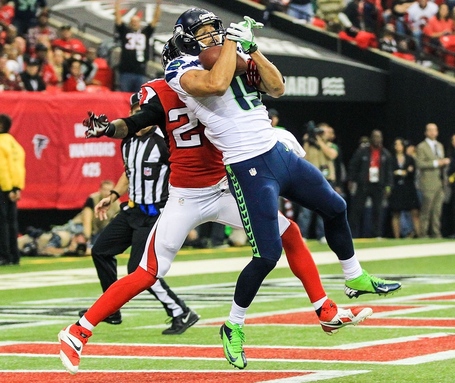 One Thing to Take Away: We're watching and the Falcons are playing for pride the rest of the way. Nothing more, nothing less.

Next Week: One of the few games you could reasonably favor the Falcons in. The Buccaneers are up next. Head to Bucs Nation for more.

More from The Falcoholic: