Falcons 2013 Season: It's Time for the Youth Movement

With the season shaping up as a lost one, the Atlanta Falcons need to play their young guys.

Share All sharing options for: Falcons 2013 Season: It's Time for the Youth Movement

I'll start this one off with a disclaimer: I am not advocating tanking. I don't believe in tanking, and I don't believe any NFL team is going to start tanking mid-season. You can slash and burn your roster at the beginning of the year like the Jaguars did for a rebuild, but after seven games? Nope. It's not going to happen.

What I am advocating for is the youth movement. The Falcons' 2013 season is an unmitigated disaster through seven games, they're sitting at 2-5 and some of their best veterans are injured, ineffective or both. The Falcons have turned to youth with the injuries and it's been a mixed bag, but they need to stick with that approach going forward.

Why? Because 2014 and beyond is what matters. The Falcons should have decent cap space going into next year. They'll have their full complement of draft picks next off-season. They'll have Julio Jones, Kroy Biermann and others returning. There's an opportunity, with a great off-season, to reload and be an extremely competitive team again for the 2014 season. 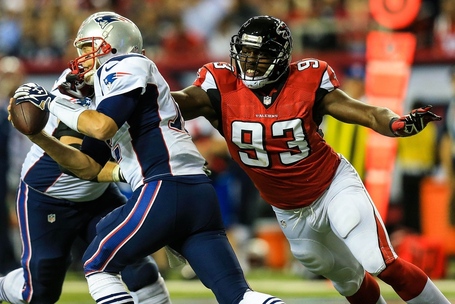 If the Falcons want to be a better team next season, they need to trot out a younger, more dynamic group of starters. The best way to do that is to give the young players on this team as much playing time as they handle. With a full season, the coaching staff can see who has enough potential and talent to be an asset down the line, and who doesn't. The strength of the 2014 team depends on more than just a good draft and some quality free agent signings. It depends on who grows on this roster.

With that in mind, I'm going to advocate for the following:

There will be growing pains. There will be mistakes. The Falcons may drop a game they otherwise wouldn't have. I'm comfortable with all of that at this point. In the course of trying to salvage this season, the Falcons need to build a better foundation for the future. There's no reason to wait.
How do you want the Falcons to arrange their starting lineups going forward?

More from The Falcoholic: