Some may consider division rivals nothing more than a plague on their team of choice. In Atlanta's case, the Buccaneers literally carry disease with them wherever they travel.

As has been well-documented, three Bucs players - OG Carl Nicks, CB Jonathan Banks and K Lawrence Tynes - have had to deal with MRSA, a serious form of staph infection, this season. Banks was well enough to play against the Falcons, but Tynes had already been declared out for the entire season and Nicks has only played in two games this year.

In fact, Nicks had to undergo surgery last week to fight a reinfection, meaning he's liable to miss even more time. That's one way to spend $47.5 million. And the Buccaneers have already had their facilities cleaned twice to help prevent another outbreak. Suffice to say, this is nasty stuff and incredibly unfortunate for Greg Schiano's crew.

Anyways, the members of the Georgia Dome event staff that undoubtedly drew the short straw were tasked with disinfecting the visitors locker after the Buccaneers came to visit. See for yourself as the movie set of E.T.: The Extra Terrestrial descends upon Atlanta with the utmost purpose and authority.

Atlanta has already dealt with many, many injuries without the threat of staph infection. So you can sure as heck bet the Falcons did everything in their power to keep anything the Buccaneers may have touched far away from the players before cleaning it thoroughly. Good job, guys.

We're not quite sure exactly how things are in Tampa Bay at the moment, but we do have an artist's sketch: 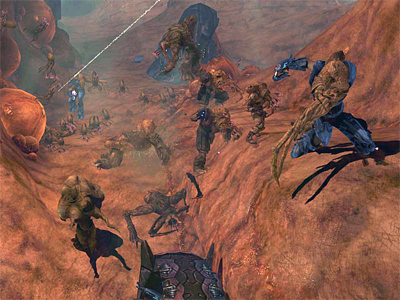