Julio Jones injury: What can the Falcons receiver expect after surgery?

Injuries to Julio Jones and Roddy White have plagued Atlanta's 2013 season so far. We sat down with an expert to find out more about the nature of their conditions.

Share All sharing options for: Julio Jones injury: What can the Falcons receiver expect after surgery?

Julio Jones is out for the year with a foot injury. Roddy White's hamstring is now ailing after he battled an ankle sprain to start the year. The Falcons are struggling to stay healthy this year, so we thought it would be a good idea to hear from an expert what these two star wideouts should expect on the road to recovery.

Dr. David Geier, an orthopedic surgeon and sports medicine specialist, was kind enough to take the time to speak with me about these two receivers. Just to give you some credentials, Geier completed his orthopedic surgery residency at the Campbell Clinic in Memphis, Tenn. He went through a sports medicine fellowship at Washington University in St. Louis, assisting with orthopedic care for the Cardinals and Rams. He created the sports medicine program at the Medical University of South Carolina and served as the director from 2005 to 2013. So, yeah, he knows his stuff.

I wanted to find out more about Jones and what he's looking at. While you should all understand it's difficult to fully diagnosis the situation and predict any sort of outcome without being a part of the team, Geier is familiar with his injury and helped shed a little light. 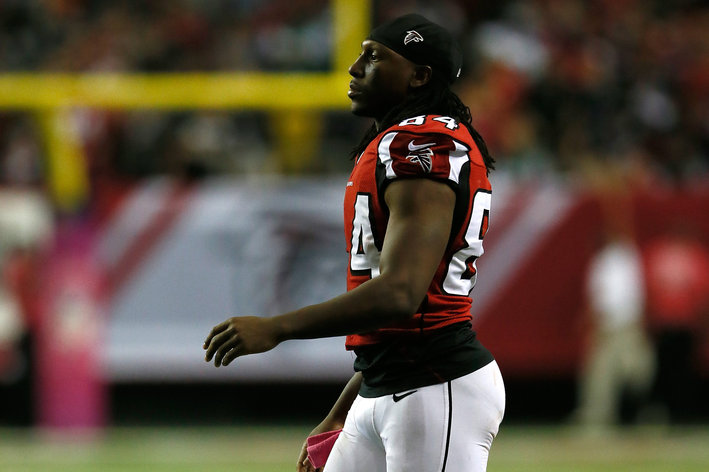 Injuries are certainly a concern for Atlanta. What other questions surround the Falcons heading into their matchup with the Bucs?

Reports have said Jones injured his foot in the same place as he did back before the NFL Combine. Geier said he saw a transcript from an interview with Jones in the past where he called it a "Jones fracture." (Isn't that ironic?) In fact, that's what the injury was, as Stephania Bell of ESPN notes.

As Geier explained, a Jones fracture occurs in the fifth metatarsal of the foot, which is basically the middle/outside area of the foot. Since reports say Jones injured the same area, we can somewhat assume this is the same issue. Surely you all saw the talk about Jones breaking the screw in his foot from prior surgery. Geier said with higher-level athletes, these injuries may not heal fully because of the constant force being applied to the area. Jones fractures are not uncommon.

"There's a high demand on the part of the bone that breaks. There's a lot of tension force with that area and it can have trouble fully healing. With the second surgery, you take the hardware out and put another screw in ... Sometimes you'll put bone grafts at the site or take blood products, basically you take some blood and reinject it or parts of the blood. It has growth factors that can help a fracture heal."

Geier said the goal of the screw is to "compress the fracture until the body heals it." It isn't meant to hold is together forever, so it's not out of the question that it would break. Jones fractures can be mistaken for sprains, which is likely the reason why Jones kept playing against the Jets. Also, he's a freak. He did this with a screw loose in his foot.

What's the timetable/recovery like for Jones after a second foot surgery?

"You would expect it to be about the same as the first time. It's an outpatient surgery. Typically you keep him from putting weight on it from 2-6 weeks depending on the severity. He'll wear a walking boot ... As you start to see the fracture heal, you increase weight bearing. You progress to jogging and cutting. Any time you have a revision surgery or repeat surgery, in general, you're a lot more cautious. It's going to run through the rest of the season, though, so I don't think there will be any sense of urgency."

Geier said progressing to full speed can range anywhere from 6-12 weeks. It will all depend on how surgery goes, what the trainers/medical staff and how Jones' body responds. Since there is no rush to get him back on the field in 2013, the Falcons will likely take their time with him. There's no rush, but Geier said we can expect Jones to be ready to go when the team picks back up in 2014.

"Without knowing anymore specifics, you would expect him to get back to the same level as before. (Jones fractures) don’t normally lead to arthritis or further problems. The success rates are good, but you’re looking at small populations of athletes who have undergone revisions," said Geier.

According to Geier, there are no "long-term consequences" with these injuries. Athletes who undergo surgery for Jones fractures or even revisions return to high levels of performance. Barring any complications/setbacks, Jones will be back to the dominant force we saw early in the 2013 season.

As for White, he missed practice on Tuesday. He injured his ankle in preseason play and suffered a hamstring injury in Week 5. If he does practice, even in limited fashion this week, that will at least be a positive sign as far as hamstring injuries go.

"Mild ones can be a week or two. Some hamstring strains take six weeks. You typically know if it's a bad one based on physical exams and possibly an MRI. If you know that it looks like a bad one, then no, they don't even go through trying them out of the field."

Geier said that hamstring injuries around the mid-thigh tend to heal quicker. If the injury occurs in the upper area near the tendon, expect a longer recovery time.

White played through his ankle injury over the first few weeks. Could that have led to the hamstring issue?

"It could in the sense that when you have an injury that affects your strength on that side, you compensate with the other side of the body. Any kind of ankle injury that makes you land or cut differently could put stress on other areas. It's not surprising."

Hamstring injuries are common in football, and they're also extremely difficult to pinpoint a timetable around. Geier said there isn't an exact science for hamstring injuries, because some players respond differently to treatment and physical therapy. The biggest risk is re-injuring the hamstring if the player returns too early. Trainers are dependent on how much pain the player says he's in, to an extent. Geier said players can make huge strides in just a day or two, though, so we'll wait to see if White makes it on the practice field this week.

Of course Dr. Geier is simply going off injuries he's seen and learned about, but while he couldn't speak definitively on Jones and White, he knows the general nature of what they're enduring. Thanks again to Dr. Geier for helping out. If you'd like to know more about his background, click here.