Why I got beat up by a girl: The lament of a lifelong Atlanta Falcons fan abroad

SB Nation's college football reporter Steven Godfrey details a childhood trauma that best defines what it's like to be a Falcons fan far from the safety of Georgia.

Share All sharing options for: Why I got beat up by a girl: The lament of a lifelong Atlanta Falcons fan abroad

The strongest metaphor for my 31 years as an Atlanta Falcons fan starts in a roadside ditch, with $200 worth of the nylon Starter jacket you see below wrapped around that very big-eared noggin. 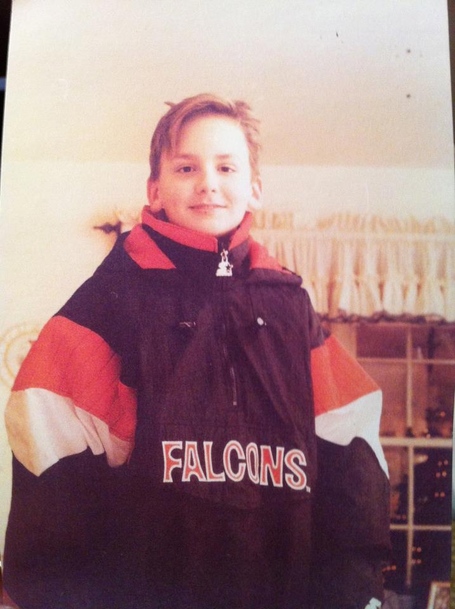 This week has provided some great writing on the plight of the native Falcons enthusiast by our own Jason Kirk as well as Thomas Lake's essay for Sports Illustrated.

This is not that kind of story.

While my parents (Roswell and Macon, respectively) grew up in the Peach State, I haven't lived in Georgia since I was 3. I can't tell you what it's like to watch a city's hopes routinely rise and crash. I can't navigate Buckhead without a nav. I have even less cred to using hashtags like #ATL or ownership of OutKast songs as personal anthems than all those UGA undergrads from Sandy Springs. While Atlanta began to emerge as the Capital of the New South thanks to millions of carpetbagging professionals towing their pro allegiances into the Marietta suburbs along with their horrible manners, I was stranded in various locales in America, a photo negative of Atlanta's local fan support problem.

To migrate across this great country as a proud and loud Falcons fan, well...if you’d like, you can stop reading right here and still understand it all with the single image of a gawky 11-year-old wearing a pullover coat turned into a headdress, lying in a muddy gulch trying not to cry and nursing a sore butt.

That's because one of the neighbor kids - a girl, no less - had an open ticket to push, punch and eventually blind me, hockey fight style, with my own beloved Christmas present from just a few months prior (the OFFICIAL Starter pullovers. If you're older than 27, you need no further explanation). Her name was Melissa. She was a grade older and my height, and surprisingly strong. Melissa’s family – what my parents referred to as "country trade-up trash" – lived five houses down from ours in a freshly built 200-home complex in the Washington, D.C. suburb of Manassas.

Nationally, Manassas is most famous for three things: a man whose wife cut his penis off, a failed Disney theme park and sniper shootings. It's quite the pastoral setting. 20 years ago, Manassas was a cultural vacuum of fresh strip malls and tract housing populated almost entirely by federal government employees and a sprinkling of native Virginians who clung to the Washington Redskins like a brutal pagan faith.

On the bus ride home from school a few days prior, Melissa’s little sister said something particularly nasty to my little sister, and in a show chivalry, I (verbally) fired back. The details of the exchange escape me now, but like in any gang war, retribution was sought. We had the same stop on the bus ride home, and Melissa knew my parents forbade me from hitting a girl. Melissa and her little sister had no brothers, so she took it upon herself to ensure I would get got.

Ostensibly, You could say I ended up in that ditch because of Atlanta's loss to the Redskins just two months prior in the NFC Divisional Playoffs, because after her first blow, Melissa shifted straight into NFL smack talk. When the FBI transferred our family to the Beltway five years earlier, my socially challenged old man had made an honest go of cheering for Washington when it didn't conflict with the Falcons. But the goober mob of nuevo riche rednecks in our neighborhood would hear nothing of it. It was total fealty to the cause of the beloved Hogs, or you were a Pharisee. That '91 game sealed it for my parents, and as Melissa stopped punching me in the back to grab my jacket and fling me into the mud, I too decided I was probably done amicably relating to 'Skins fans:

If you're a Atlantan or Southerner trying to grasp the idea of the Washington Redskins' fan base, imagine the Northern Virginia suburbs as the fertile crescent of terrible football fans. It's a crossroads of culture that fills the insufferable maw of a blue collar NFC East fan with the wanton delusions of the worst southern NASCAR or SEC enthusiast, and it's wrapped in horrible colors with an insanely racist mascot. If that doesn't work, just imagine the love child of an Eagles fan humping a Finebaum caller in a Friendly's parking lot.

I could tell you about the other places I've lived, like my college years among all the New Orleans Saints faithful at Ole Miss followed by my marriage into a Louisiana family. At our rehearsal dinner, one of my Georgia-born groomsmen produced a truck stop pleather Falcons jacket as a "bridal gift" to my wife in front of her uncle, who actually played running back at LSU and then for New Orleans (he laughed in good fun). But I choose not to tell those stories as example of my suffering fandom because there's an underlying humor to all great rivalries, especially within the bonds of family and marriage. I enjoyed a cheerful dislike of Who Dat for years and then a white-hot loathing of their obnoxious bandwagon in the post-Katrina Payton/Brees era, but even at my most bitter, there's a bizarre sense of celebration under all of that bad blood. Not to mention, a rival is sort of a metric of relevance. The Saints won a Super Bowl, but they still really hate us! AWWWW, thanks, y'all.

That's not the case when you're drug across the Eastern seaboard proudly promoting a team as ridiculed, irrelevant and downright awkward as the Atlanta Falcons were for so many of those years. An expansion team with three decades of bungled management didn't really inspire a "lovable losers" moniker that so many awful Cubs fan invoke. And keep in mind, this was pre-Vick, pre-Petrino, pre-Eugene Robinson. I imagine Melissa would've enjoyed telling a good Ron Mexico joke while she was landing haymakers and making my sister cry, but even then in 1992 she didn't need it. The Falcons have always been easy to ridicule:

"Your dad's a cop? My dad could beat your dad up! So could Dexter Manley!!" / butt punch 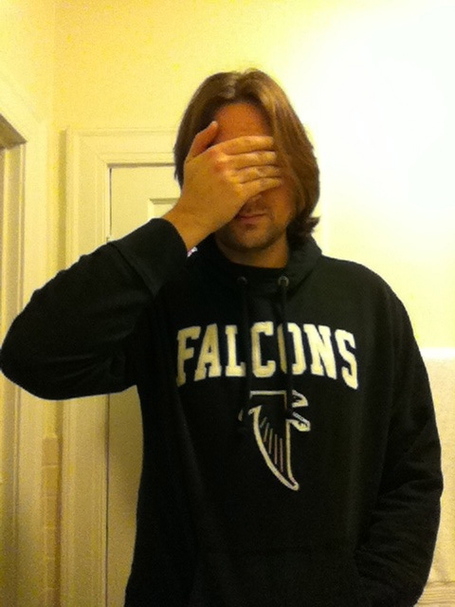 This is going to be absolutely awful, because every bone in my body tells me the Falcons wil lose handily to Seattle on Sunday. As a college football reporter and writer I've fancied myself fairly accurate at predictions, but a partisan haze hangs over every Falcons game I watch. I routinely chide fans for irrational behaviors, yet ignore the damage I do to my blood pressure and marriage from staccato bursts of screaming and silence over four hours. Whether at home in my office or standing in a bar here in my current city of Nashville, I'm simultaneously embarrassed to be a 6'5" grown man wearing a Matt Ryan jersey in public and yet also beaming with defiant pride.

Tell me: They suck. They're too "ghetto," or did Vick wrong or didn't do Vick wrong enough. Tell me they're dog fighters and johns and chokers, that they traded Brett Favre and they're MC Hammer fans, and that being head coach there is a worse job than Arkansas. Tell me they don't matter like your team does, they're not cool to like, sometimes even in their own city.

You may punch me in the butt with your insults, but my butt is numb.

The Falcons are the one thing about my home state I'll always know the most about. They are mine. If I didn't quit in the ditch, I never will. Even at only 11 years old, I found myself calling upon a sense of place I couldn't quite understand. Maybe I was discovering heritage or pride or customs of my home culture. Whatever it was, it superseded my seemingly fatal childhood embarrassment of having to let a girl beat on me at a bus stop.

I never got up, at least not until she left. I never threw a punch. Time, wonderful time, would jab Melissa over and over. As my family packed up a moved from Virginia years later, she had failed to kick at the ass of environmental development, and today I strongly suspect her to be the unwed and pregnant Target associate by day that you see in a YouTube clip, slapping the earrings off of her boyfriend's mistress in the parking lot of FedEx Field. Hogs indeed.

I didn't go home and throw away the Deion Sanders Starting Lineups figurines or my collection of Scott Case trading cards. I didn't stop asking for Falcons hats and jackets each Christmas. When Vick went to prison and black Atlanta recoiled at the kid from Boston College, I adopted a shelter pit bull mix and tricked my Saints fan bride into naming her "Mattie Ice."

I've kept right on, from 11 to 21 to 31. Then, as now, I've just endured being punched in the butt while people laugh. I will endure this coming punch in the butt - or - against the odds, I will exhalt, I will dance and I will keep my promise to go Vegan for the entire offseason if Tony Gonzalez catches a Super Bowl winning TD pass.

I am a Falcons fan abroad in a world of Melissas from Manassas. I have to endure.

Also, the next day I told my two friends at the end of the cul de sac, and they threw a brick through Melissa's screen porch. They were Steelers fans.