Matt Ryan: The Unfair Scrutiny Round 2

Share All sharing options for: Matt Ryan: The Unfair Scrutiny Round 2

Hey guys, it's time for another one of these posts. This one's Round 2 because I wrote one a few months ago on how some people were unfairly scrutinizing Julio Jones or the trade for Julio Jones because blah blah blah.

Well, it's time to do one for Matt Ryan.

I skim this blog regularly. I don't always comment on things, but I try to when I have a few minutes. I think it's safe to say that the biggest complaints about Matt Ryan's game are as follows:

3) Decision making while under duress

Most quarterbacks - even some of the great ones - have or have had these problems to some degree of severity, especially #3.

I was bumbling about YouTube a few days ago when I stumbled upon a particular video that made me realize that Matt Ryan was throwing balls out of a pocket no bigger than him at times. Not only that, they were accurate.

Before you look at this video and go "What the heck?" understand that this is, indeed, the video I watched. Yes, it's only one video, but I watched the video once for the highlights, and then I happened to watch it a second time for Matt Ryan.

I understand it's one video, and that one video cannot necessarily be the tale of the tape for any one player. Except Julio. Muwahahaha But I think this video debunks a little bit of the myths of Matt Ryan's problems, believe it or not.

I chose not to go the statistical route here because we've talked about Matt Ryan's stats and beaten that horse firmly and deeply into the ground. Matt Ryan is roughly the 7th best QB in the NFL. Most advanced stats would agree, and that's about where I'd place him on the hierarchy of quarterbacks right now.

However, I want you not to look at Julio Jones's awesomeness, but rather Matt Ryan's throws. I'll break them down.

The first throw is great. Was somebody talking about deep ball problems? The ball travels 40 yards in the air, and it hits Julio right on the money. Julio does turn around, but it's not like it was an errant throw and it was placed where only Julio could get it.

That's the trick here, folks. When you have that kind of accuracy, you can do good stuff.

At 1:00, it's Julio's first TD, ever. Matt winds up and throws a prayer. He uncorks it from around his own 42, and it lands on the goalline. 58 yards? Yeah, that's not bad. He probably won't throw it much farther, but does he have to? Also, case in point for this one. Look at where the ball ends up: only where Julio had a chance to get it. The great quarterbacks have this skill nailed to a T, and Matty has it. It might not be all the time (what QB has it ALL the time?) but it's enough for us, and he's only getting better.

Next comes Julio's 80 yard TD, which was entirely too cool. I'd venture to guess this showcase's Matty's presnap reading ability. Dirk Koetter has said repeatedly that his offense will get players the ball quickly and let them do their thing. Expect to see more of Super Julio like that if he sticks to it.

Next, at 1:55, we have Super Julio against the Panthers. Matty unleashes a missile to Julio, and it's a perfect one. It sails just out of reach of one of the Panthers in the middle and hits Julio right in stride. The ball had some zip on it (I have to watch these videos in low quality because internet at my house sucks) but it looked like a duck. Regardless, it got there on time, and it was, again, right where only his guy could catch it. The ball traveled from the 19 to the 43, or roughly 24 yards. So we have good deep ball distance (58), good velocity on intermediate throws (24), and accuracy in both instances.

Next, at 2:28, we have a sideline throw to Julio which ends up being a pretty deep ball. It travels from their own 14 to the opponent's 39, good for a 47 yard toss, if my math is right. Matt looks like he doesn't really wind up to throw this one and it still almost went 50 yards. It looks a touch underthrown, but it doesn't appear to slow Julio down at all, which just means Julio is too fast for Matt....and the DB covering him (har har har).

The next throw is against the Jaguars, where it's the Julio Show again. Sweet play, but nothing spectacular.

Alright, this next throw is one I really like. So if I recall right, this the Panthers game I could barely watch because we were getting our butts whooped all game until the end.

It starts at 3:03 or so. First of all, this is crunch time. Falcons are down 6, threatening to score. It's early in the 4th quarter, so time is running short. Matt takes a deep drop, but hesitates to throw initially. The pocket collapses around him and yet he keeps his composure. At 3:06, there are all kinds of Panthers and Falcons around him, and he delivers a strike to Julio. Matt does slide up a little bit, which looks kinda like happy feet, but I see Peyton do that stuff a lot and he's probably bored in the pocket these days.

Next up is 3:14 for a throw against the Bucs. This is another good one to showcase Matt's pocket awareness. Matt takes a huge drop and throws a prayer to Julio. He also pump fakes once as the pocket collapses around him. He doesn't freak out, he doesn't make an errant throw, he makes a good deep throw to Julio. It's not perfect, but it doesn't have to be.

Next is 3:23, where Matt delivers a ~25 yard strike to Julio. This is a good example of Matt's anticipatory skills. If you can, pause it at 3:26 after Matt has thrown the ball. Look at Julio. Julio isn't open, he doesn't look like he's going to be open, but as the ball starts to get there, Julio suddenly becomes wide open. NFL passing games are really something.

The throw after that one was the one against the Eagles that seemed to will us to victory. Good mobility by Matt and a very accurate throw was made despite him being on the run. Once again, it was placed where only his guy could get it.

Next throw to watch is at 4:18. We worry about arm strength and whatnot. In this throw, Matt retreats, throws off of his back foot while retreating, and the ball still goes from the 41 to the 8, or 33 yards. But you know what's most impressive about that throw? It's dead-on accurate. Seriously, Julio was wide open, Matt delivers a little flutter, and it hits Julio in stride for the easy catch.

The last throw on the video is pretty good. It's a zippy throw that, once again, is placed only where Julio could get it.

Anyway, that's something different for you all this evening. It's not the greatest case in the world to make for Matt, especially because it's a Julio Jones highlight video, but I think it shows a good variety of examples of what Matt can do when he's not on the ground, and I think it provides some weight to those that aren't haters.

Anyway, let me know what you think in the comments. I'll be around. And just remember, if logic and stats don't sway them, just tell them 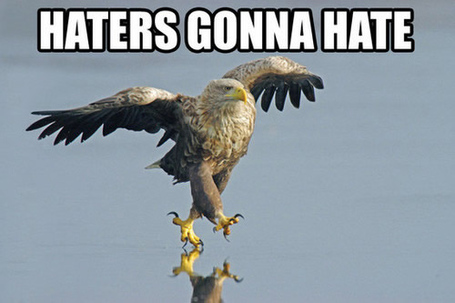