The Falcons continued to ride their momentum from dismantling the Giants as they took down the Lions 31-18 on the road in Week 16. Saturday night's game brought several record-setting performances to light, all while Atlanta made sure its hometown would play host to the postseason this year.

It feels a bit odd to hear/see analysts praising the Falcons, but it's actually happening now. Their 30-20 loss to the Panthers is far in the rear-view mirror (until I just brought it up, my bad), as they now head into the final week of the regular season riding a two-game win streak.

Now sitting on two consecutive wins in Detroit, Ford Field is becoming a nice second home for the Falcons. Dave gave me the honor of hitting the first full recap this time around, so let's get right to it.

- Locking up the No. 1 seed in the NFC and clinching home-field advantage is a nice way to spend a Saturday night. The road to this season's Super Bowl will go through the Georgia Dome. Worth noting, Atlanta's only two losses have come on the road in 2012.

- Atlanta capitalized on turnovers, which has been an issue at times this year (see: Denver game). Dirk Koetter's play-calling impressed with for the majority of the game. He let No. 2 take several shots downfield, and they payed off. Also, back-to-back screen plays in the second quarter? Brilliant. The Lions sniffed out the first, but the second went for a 39-yard touchdown, marking their sixth screen score in 2012.

- Matt Ryan put in another MVP-type performance. Four touchdowns and a passer rating of 142.6 makes it difficult to criticize any part of his game. He dropped an absolute dime to No. 84 in the first quarter. If you keeping track at home, he now has seven scores and zero interceptions over the last two weeks. He's heating up.

- Roddy White took over. Eight receptions for 153 yards and two touchdowns probably made a few fantasy owners happy out there. Julio Jones made the highlight reel with an insane 16-yard score, managing to drag his back foot in the very corner of the end zone. How do you stop these two? 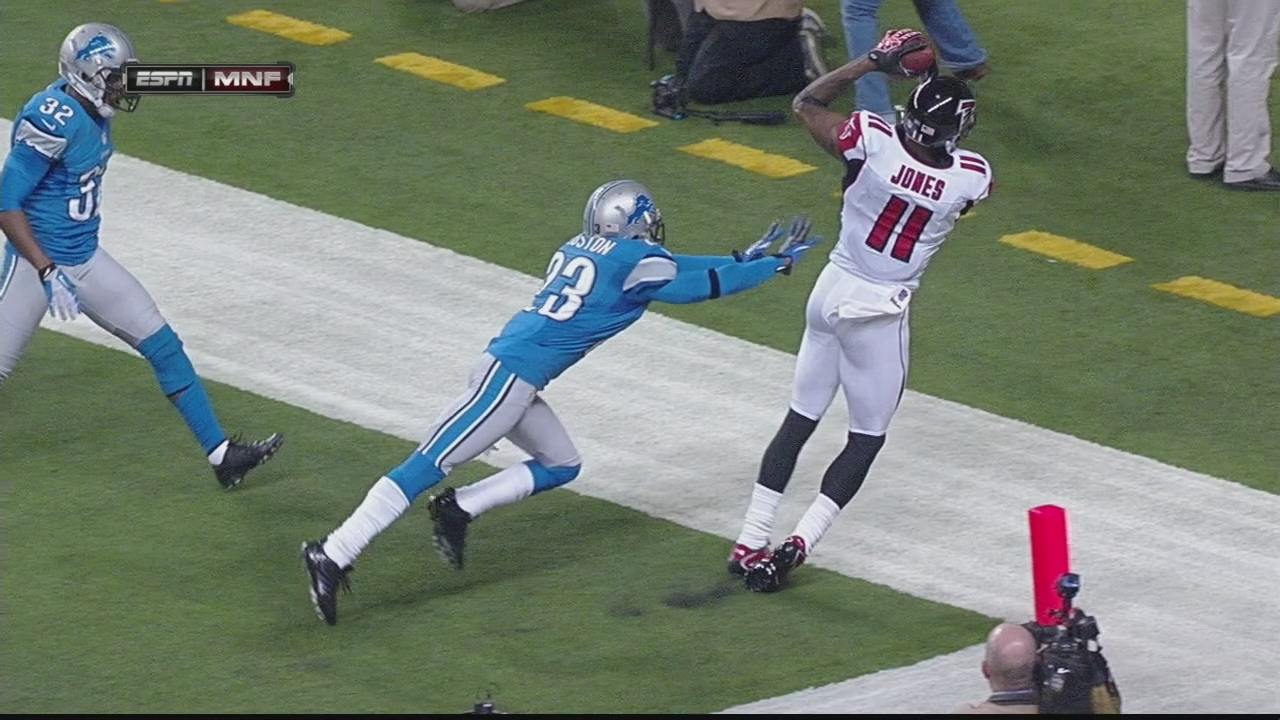 - Sam Baker was out in front paving the way to Roddy's screen touchdown, leveling a defender in the process and drawing praise from everyone on Twitter. That's how you know you did something good.

- Kroy Biermann forced a fumble, although it looked like Corey Peters played a part in that strip as well. Speaking of Peters, he came up with four stops against the run. He's looking better. John Abraham forced a fumble as well.

- Asante Samuel picked off another pass. He certainly faced some adversity in coverage, but he makes plays when the Falcons need him the most.

- The defense held the Lions to three short field goals. Sure, they hemorrhaged yards at times. Forcing teams to stall deep in the Falcons territory, though, is a huge plus.

- Atlanta's ground game...still exists? I think. Of course this will be a hot topic for critics discussing their playoff potential. Michael Turner averaged a whopping 3.2 yards per carry. Jacquizz Rodgers couldn't find any room to run on his six carries. Allowing a running back to find his rhythm might be a better idea than constantly rotating the backfield. It's not likely to happen, but we're getting used to the lack of a rushing attack.

- Calvin Johnson basically did whatever he wanted. Congrats to him on breaking Jerry Rice's single-season record, but 11 catches for 225 yards is rather discouraging. Plus, all the media is talking about now is his performance. Thanks a lot for stealing the spotlight, Megatron.

- The Falcons finished with 10 missed tackles per PFF. Spoon was on the hook for four of them.

- Stefan Logan, how long have you been playing football? I don't think I've ever seen a player take a knee at the 4-yard line. The Schwartz was not with him.

- Poor kid. We in Atlanta somewhat understand your pain from the history of sports here. There's always next year.

Next week: Home at the Dome against Tampa, y'all. Check out Bucs Nation for more.