Short-Yardage Is Kryptonite For The Falcons

Share All sharing options for: Short-Yardage Is Kryptonite For The Falcons

The Falcons lost to Saints at the Superdome with no Sean Weatherspoon, half of Julio (see: ankle/leg) and a whole city against them. It's the first loss. It's a bad loss. It can be overcome.

In order to grow as a team going forward, short-yardage situations have to be a primary concern for the coaching staff. Why? Look at this stat:

#Falcons were 4 for 16 when facing a two-yards-or-less situation on Sunday to extend drives or give them a TD.

It's extremely frustrating to see third-and-short come up every drive, only to see the sticks remain firmly planted it the ground. Honestly, they look better off on third-and-8 throwing downfield than they do trying to pick up a couple yards. This growing trend became apparent throughout Week 10, if it wasn't previously noticed.

Where does the crux of this issue derive from, though? Is it the play-calling? Is it the blocking? Or is it Michael Turner? To be fair, circling all of the above is suitable. Let's investigate on a case by case basis.

Second drive of the game. Brees was just picked off, and the Falcons have a great opportunity to go up 14-0. Up comes third-and-1. As you see below, Julio is the motion man. Corey White, who was covering Julio in the slot, stays home and prepares to blitz off the edge. Atlanta's offensive line shifts left on the run while Turner tries to dive right. The result? A loss of a yard. 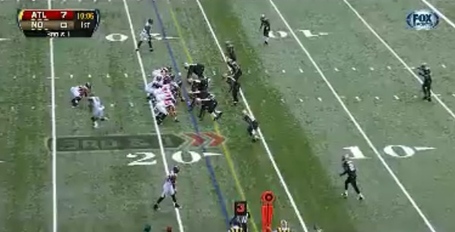 The front five didn't get any kind of surge on this play. It's hard to blame Turner here. Maybe if he bounces back to the left with the O-line sliding he finds a yard, but the Saints brought excellent pressure. The very next drive the Falcons faced third-and-1 again. Ryan tosses a quick pass to Jason Snelling out of the backfield, but the throw is short. Bosher time.

Fast forward to the final goal line stand from NOLA late in the fourth quarter. Atlanta finds itself at the doorstep of the end zone after Harry Douglas barely misses a touchdown on first-and-goal. Next they run a play-fake and toss it to Tony Gonzalez towards the back of the end zone. Malcolm Jenkins makes a good play to knock it down. Ryan could have led Tony just a bit more, but he had pressure in his face. It's fine, right? Still only two attempts to punch it in.

Ah yes, third down. We meet again. The Falcons haven't fared particularly well in this area so far, but now's the time to put all that regret and turmoil behind. And what play is drawn up? The old "Turner Churner" straight ahead. Palmer and Cox lead the way as they try to open up some room to left, but the line is devastated. Blalock pulls and ends up blocking back at the two-yard line. Turner stumbles his way into the pile with incredibly mediocre momentum, and fourth down appears.

On fourth-and-goal they try to hit Roddy in the back of the end zone, but Tyson Clabo is abused by Cameron Jordan, Ryan is forced to throw off his back foot, and alas, the undefeated season is as fathomable as my chances in the NFL.

I don't like running the ball with Turner on third down. Perhaps earlier in the game I'd let it go, but in this situation, it was clear he wasn't going to get the job done. Especially with the front five struggling throughout the afternoon.

Facing NFL's worst D, Turner posted no gain/negative yards on more than half his carries. Failed to score 3 separate drives from 1 yard out.

There's a telling stat. Three separate tries with Turner from a yard out in this game. Three failed attempts. He rushed for 15 yards on 13 carries, and even his most loyal supporters were calling for his head (benching, kind of) at the end. Turner now has just three touchdowns on 17 goal-to-go carries in 2012.

The offensive line needs work. The run game needs work. The play-calling needs work. Need for improvement all around! Running a fade route to Julio would have been nice. That idea came up empty on the previous drive, but the pass was a bit too far and he nearly hauled it in anyways. "Well, he was dealing with an injury." Obviously they felt confident enough to try it once, why not try it on second or third down when a touchdown was dire?

Smitty and his beloved band of football minds will work on short yardage situations in the coming week, that's a given. I would like to see less of Turner, and more of Tony G over the middle, or Quizz in the flat maybe. Anything to help keep these drives going/find the end zone. That's my take, what's yours?