You know the drill.

How are we already halfway through the season? The first seven games for Atlanta feel like they flew by. As the only team with a winning record in the NFC South, the Falcons hold a commanding lead in the division, as well as the No. 1 seed in the conference.

Surely several analysts will predict the Cowboys to pull of the upset in Week 9, but the general consensus right now seems to feel confident about the Falcons improving to 8-0. The rest of the division, though, doesn't look as clear cut this week.

Somehow I'm tied with Dave now in our overall record. James finished a perfect 4-0 with his selections last week, moving into a tie with Caleb for first. Only a game separates us, so the title of NFC South guru is still up for grabs. Let's take a look at our picks for Week 9. 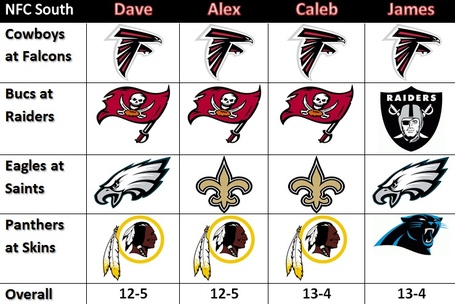 Shockingly, everyone went with the Falcons, again. The Cowboys valiantly fought back against the Giants this past Sunday after Tony Romo made his best effort to give the game away in the first quarter. DeMarco Murray likely won't play, and Felix Jones, if he even suits up, shouldn't scare Mike Nolan's defense. It's looking like another W for the Dirty Birds.

The remaining slate of games caused more disagreement. James went with Oakland to knock off Tampa at home. With the way the Bucs played last week, I just couldn't make the same mistake of picking them to lose. He was even more of a rebel this week as he stood alone in choosing the Panthers. If you didn't already know, this matchup has implications on a much larger scale. According to the Redskins Rule, the outcome of this game will correctly predict the presidential results. Three of us chose the Skins, which would mean Obama is set to take his second term. If James is correct, Romney gets the nod as commander-in-chief. Interesting theory, especially with the history. Click on that link above to know exactly what I'm referring to.

Finally, Caleb and I actually picked the Saints to beat the Eagles this week. They have no defense at all, but with the recent struggles from Philly's offense, I can certainly see Michael Vick turning the ball over a few times, allowing Drew Brees to forge ahead.

But that's just my take. What are you thoughts on the upcoming matchups discussed here?