The Falcons managed to stay undefeated after Week 7. Will we all pick them to win this week?

Somehow Atlanta still sits on top of the NFC South after Week 7. The Falcons are back in action this on Sunday, thankfully, after the NFL told them to take a week off because they were playing too well.

How's everyone else in the division doing? Well, the other three teams have a combined record of 5-13. So, yeah, they're doing...they're doing good.

It's not looking like a promising weekend forecast for the NFC South. Take a look at our picks and we'll talk about what we can expect in Week 8. 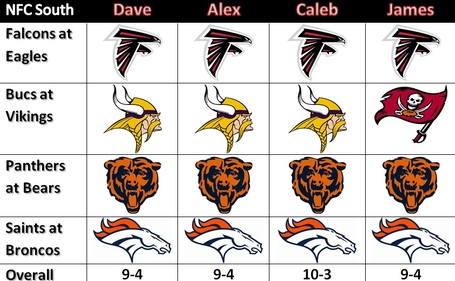 I picked the Panthers last week, and that costly decision opened the door to Dave and James for a three-way tie in second place. Caleb remains in the lead, but it's close.

The only game all of us didn't agree on was the Bucs on the road at Minnesota. James was brave enough to stick with Tampa this week. In my view, the Adrian Peterson is picking up steam right now, and he's going to be tough for anyone to stop. The Vikings defense ranks top 10 in the league. Schiano's club likes to keep games close. I just don't see it happening.

Chicago is clearly a better team than Carolina at this point. The Saints have momentum going into Sunday night. Everyone seems to believe the Broncos are one of the top teams in the league, some even ranked them ahead of the Falcons. I guess we'll see how the fare against Brees. We know NOLA has no defense, so it's looking like a shootout.

All of us are still picking Atlanta to stay undefeated. Andy Reid knows how to prepare his teams coming out of a bye, and the weather may factor into this matchup up in Philly. Mike Vick turns the ball over far too much, though. I'm taking Smitty's squad to get it done on the road.

What's your take on this slate of games?