Share All sharing options for: Antiquing with the Falcoholic: Falcons Coke Stuff

In this series of posts, I'm going to take you fans to the utter depths of retail depravity: flea markets. We'll hunt for rare Falcons memorabilia of old in these junk-littered meccas of musty smells.

If you asked a group of Atlantans to write down two things synonymous with the city of Atlanta, Falcons and Coca Cola would come up a lot. For those of you not in the know, the Coca-Cola company was incorporated in Atlanta in the year 1889 by Asa Candler. While the company Asa founded eventually only ended up making syrup and concentrate (it franchises bottling companies across the world), its connection to Atlanta is strong enough to warrant a Coca-Cola theme park. Oh, and there's Coca-Cola Enterprises, one of the largest bottlers/distributors in the US, operating in the city too.

It is that bottler that has, over the years, graced the Coke loving Falcons fans in the area with unique (and rare) keepsakes. Through Coke's long-standing sponsorship of the team we hold so dear, many Coke themed Atlanta Falcons merchandise has found its way into the homes and hearts of fans. I just happened to find a few on my antiquing travels. 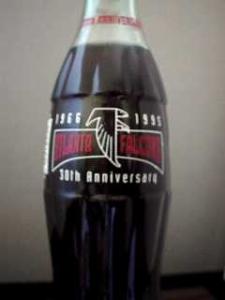 In 1995, I was in sixth grade in Montgomery, Alabama. Thus, I did not have the fortune to grab one of these fine pieces of Falcons-Coke history. These were only available to those lucky fans that came to the Georgia Dome for the season opener that year. We faced the Carolina Panthers and happened to win 23 to 20. The 95 Falcons team ended the regular season at nine wins, seven losses and somehow managed to make the Wild Card round. We ended up getting beaten by, who else, the Green Bay Packers.

I found my mint-condition 30th Anniversary bottle for $4.50 at Angel's Antiques in Opelika, Alabama. For those of you who have no clue what city this is, I'll just end your misery. You know Auburn University? This is the "city" part of Auburn. The "city" of Auburn is more or less the university itself and a downtown area, while the city of Opelika is the small urban area surrounding the north side of the campus. You're welcome. Class dismissed.

Getting this bottle on the internet will cost you a little bit more, usually about $10 bucks plus shipping. If you desperately have to have it, go here. You may find it on Ebay and end up paying less for the initial price of the bottle, but most auctions I've seen have $7.00-$9.00 shipping charges. Yikes.

It's rare to find old coke bottles with their liquid and cap intact that don't have a cap that's rusted and unreadable. So finding one of these 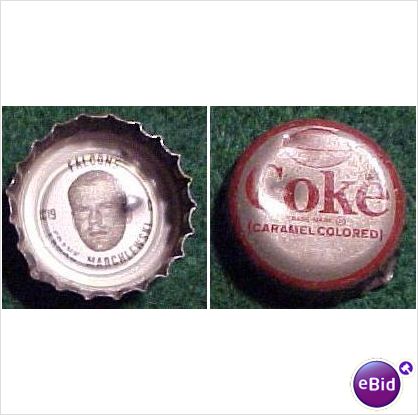 might be a little difficult. Thankfully, the internet has you covered here, here, and here. These caps weren't limited to the Falcons but helped chime in the inaugural season nicely.

This one may not be as rare is it needs to be yet. Surely, people are holding on to them because they're a very prominent reminder of a 14-2, Super Bowl-reaching season. Well, maybe. I found mine in an antique store in Montgomery, Alabama. If you don't have one in your immense Falcons collection, you can find yours on eBay.

Be sure to catch my next post, which features old school Falcons football programs.