Well, ladies and gentlemen, it's game day, and I'm sure you'll be in agreement with me when I say that this game makes me really nervous. We could easily win or lose this game based on just a few plays, so here's to hoping we bring our A game this week. Specifically our (A)aron Rodgers game. Har har har, see what I did there/shazam/etc.

DOL: This might be considered cheating, but DOL also has a six pack of his own this week. Take a look, they're all good reads, especially the one where Gonzo hypes up Matty Ice for being so awesome. Seriously, could we have picked anyone better? I say nope.

Pat Yasinskas: Pat has made his triumphant return from the Falcoholic netherzone to provide us with this story of how a win tonight would be a huge step for Matty Ice's legacy. The thought of Matty leading us to victory is almost surreal, but I know he's as capable as anyone of doing it. Also, a neat little video that was on Pat's blog of Gonzo going on Sports Science. Seriously, he hit that dummy with 2000 pounds of force, and a battering ram is only 800 pounds of force? Are you kidding me?

Palm Beach Post: Ben Volin over at The Palm Beach Post writes this article about how Bill Parcells shunned us in 2007 to go to the Dolphins and how we're getting along just fine without him! In fact, I was really amused at this article because it's true and it's kinda....funny. Maybe more along the lines of irony, but still, I was amused.

USA Today: Jim Corbett over at USA Today writes this article about gettin' loud tonight. I hope the Dome makes a seismic shock like Qwest Field. Seriously, ATL, are you gonna let SEATTLE of all places be louder than you? I hope not! Also, that page looked kinda...off when I linked it, so if it looks strange, I apologize.

Philadelphia Enquirer: Michael A. Lough from TPE writes here that we are strictly business, but we still get the job done. I love how even the players are seeing that we're underdogs, even at 13-3 and with the number 1 seed. I also love how Ovie's like "Yeah, we'll show them when we get out there and hit them." Yeah, I like the sound of that. Also, the Rodgers/Jones picture could be a Haters Gonna Hate picture, much like... 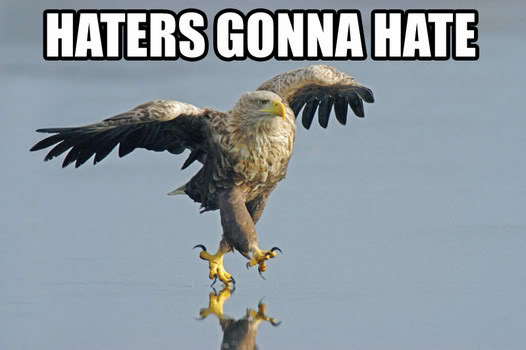